Investors are motivated by two things and two things only: fear and greed.

It's just that simple. 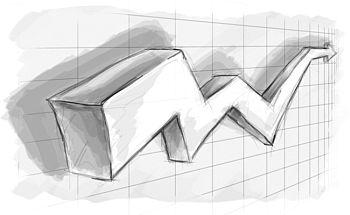 More often than not, investors turn bullish when they think a stock is headed higher — and bearish when they fear that all is lost.

The trouble with this strategy is that, for most investors, it's at precisely these extremes in sentiment when they often lose their shirts.

But investors often don't account for the emotional aspects of trades. This leads to the wrong points of exit and entry. When the market is dipping, the bulk of investors panic and sell.

Most likely, if you've dabbled in investing, you're aware of this: When the market is dipping, many investors sell.

On the flip side, those same investors often buy back in at the top. They don't feel confident until the stock has reached a strong point, which often means that it's preparing for another dip. It's a profit-losing cycle.

And believe me when I tell you this: It's hard to turn a buck on Wall Street when you're constantly buying at the top and selling at the bottom.

To maximize profits, you have to go against what's conventional.

And top analysts know it. This is why they rely on the VIX Index to assess whether the current market sentiment is excessively bullish or bearish in order to plot their next moves.

It turns out that the only thing an investor needs is the use of a valuable tool in order to turn a negative experience with Wall Street into a watershed of profits.

Once upon a time, a London hedge fund used Twitter to turn quite the profit.

Using this method, the fund was able to predict the market with an 86.7% accuracy.

Today, that hedge fund no longer exists. Not because it didn't work, but because it relied on a method that was less reliable than the VIX.

But the underlying investment principle remains the same: Emotions control the market.

The VIX helps investors capitalize on and manage an emotional market in a different way.

You see, the VIX Index is one of the so-called contrarian indicators.

That is, it tells you whether or not the markets have reached an extreme position one way or the other. If so, this tends to be a sure sign that the markets are about to stage a reversal.

The idea is if the wide majority believes that one bet is such a sure thing, they pile on. But by the time this happens, the market is usually ready to turn the other way.

Of course, as we pointed out above, the crowd rarely gets it right. (So much for the rational market theory...)

So, the smart money simply uses the VIX indicator as a sign to bet against them all.

In other words, if the crowd is feeling very bullish, it's definitely time to think about getting bearish.

It's counterintuitive for sure, but it works 99% of the time — especially in volatile markets.

And that's why the VIX indicator is a trader's best friend these days. Because if there's one way to describe today's markets, it would have to be "volatile."

So, What Is the VIX Index?

Developed by the Chicago Board Options Exchange in 1993, the CBOE Volatility Index (Chicago Options: ^VIX) is one of the Street's most widely accepted methods for gauging stock market volatility.

It was constructed using the implied volatilities of a wide range of S&P 500 index options. Since 2004, it has become a far more expansive and valuable tool that uses information from the entire S&P 500.

But because it's basically a derivative of a derivative, it acts more like a market thermometer than anything else.

And like a thermometer, there are specific numbers that tell the market's story...

A level below 20 is generally considered to be bearish, indicating that investors have become overly complacent.

Meanwhile, with a reading greater than 30, a high level of investor fear is implied, which is bullish from a contrarian point of view.

The smart thing to do is to wait for peaks in the VIX above 30 and to let the VIX start declining before you place your buy.

As the volatility declines, stocks (in general) will rise and you can make big profits.

You see it time and time again. In fact, the old saying with the VIX is "when the VIX is high, it's time to buy."

You can basically think of the VIX as a sales alert tool.

When these stocks boom, you'll know that you were one of the smart investors who bought at the bottom and watched your investments rise alongside market confidence.

Investors who feel like they have control over the market tend to make more profits in the long run. So, add the VIX to your investing toolbox, and use it during times of volatility.