It Pays to Listen to Meredith Whitney

We've always been a fan of Meredith Whitney. . .

Not just because she's agreed with everything we've said, but because she tells it the way it is.

And we're happy to see Meredith Whitney doesn't drink from the same Kool-Aid the banks do. Nope. She tells it the way it is, destroying the idea that the financials rally is real.

"They were overdone all the way into this rally. What happened was the government - I call this the great government momentum trade - the government enabled the banks to have better than expected, better than even the banks could organically deliver, first-quarter earnings. That looks like it could continue into the second-quarter and the third-quarter. The banks rallied from well below tangible book multiples to almost two times tangible book multiples. . . the underlying core earnings power of these banks is negligible," she says.

Worse, this will not be the last time banks need to raise capital. And she believes bank earnings in 2010-2011 will be below consensus estimates.

But if you ask Bill Miller, he'll tell you she's dead wrong. Miller believes "financials have the biggest potential to outperform other stocks because of how far they've fallen in the worst bear market since the Great Depression. . ."

Miller also said he expects U.S. housing prices to stabilize "this year and for the economy to perform better than Federal Reserve projections." He also believes the equity markets will rise 20% to 30% in 2009 and that his fund will rebound. (But if he continues to invest in companies like AIG and Freddie Mac, or make any other massive bets in companies that crumbled, the fund may not improve any time soon.)

Who do we agree with?

But our economy will not come back until at least 2012, in our opinion (mark these words). And that's because of commercial real estate, mounting foreclosures, higher unemployment figures, and more pain in residential real estate. . .

Commercial Real Estate Problems: "Have the Potential to Intensify"

Even as banks deal with rising foreclosures and defaults, lenders have something else to worry about - quick rising tides of potential losses from commercial real estate. These losses could easily stretech into the billions, as delinquencies and defaults on office buildings, retail buildings, and hotels have more than doubled in just six months.

Says the Associated Press, "While homeowners are defaulting at almost four times the rate of commercial landlords, the sudden spike in late payments has many industry insiders worried about the collateral threat to the economy and financial sytem. Nearly $73 billion worth of commercial real estate loans are in some level of financial distress, according to Real Capital Analytics."

And its risk to the greater economy is largely unknown, but it'll be bad. . . real bad. Frighteningly, its impact is likely underestimated in the government's bogus stress test.

Worse, about $271 billion worth of commercial real estate loans are coming due this year alone. That's part of the reason why General Growth Properties dug itself an early grave.

Even Dallas Fed chief Richard Fisher believes "problems in the financial industry and commercial real estate have the potential to intensify. . ."

Additionally, vacancies in commercial properties are skyrocketing, and millions of square feet of commercial real estate are currently under construction and ready to flood the market. About $171 billion in loans backed by offices, shopping centers, hotels, and other buildings are coming due this year, according to Union Tribune. Experts are fearful there may not be enough "credit capacity in the system to refinance them."

They are just around the corner and will mark the beginning of the second half of our crisis. But this is nothing new. We've been warning about these resets for months, just as we warned about subprime in February 2007.

It's the reason I remain bearish on the market medium-term.

For an idea of just how bad the resets could get, take a look at some of these charts pulled from Dr. Housing Bubble. 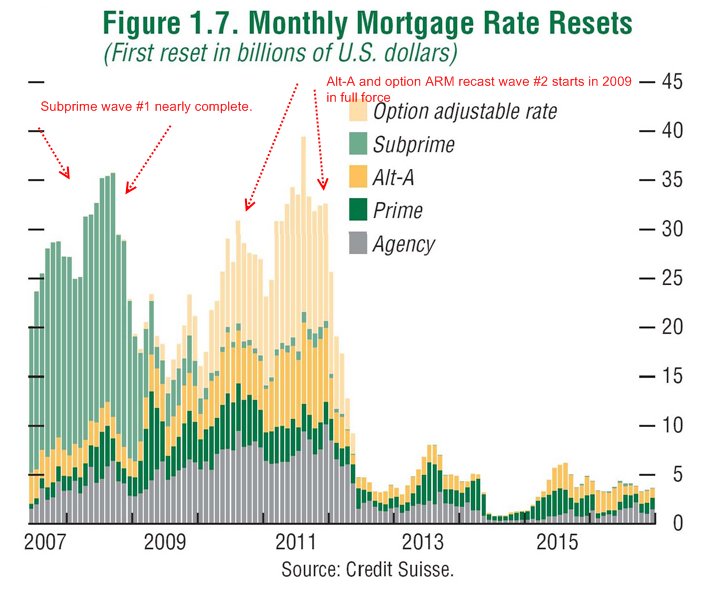 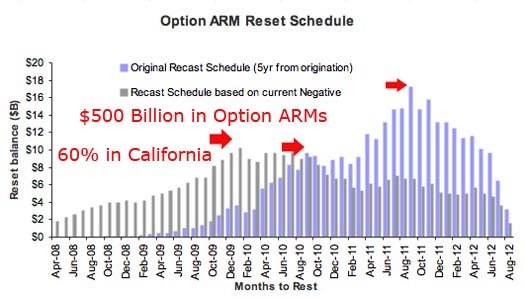 What's more, about $750 billion of Option ARMs were originated between 2004 and 2007. And a reported 55% of those who took out an Option ARM owe the bank more than what their homes are actually worth.

As of December 2008, 28% of Option ARMs were already delinquent or in early stages of foreclosure.

We haven't even begun to see massive resets, and already one in every four is a disaster. Guess what happens when $30 billion of Option ARMs reset this year and another $67 billion reset next year?

Even worse, according to Dr. Housing Bubble, "the average Option ARM monthly payment is going to go up by 63 percent or $1,052." And this will happen to all of these loans, whether or not the loan holder loses their job.

You've been warned. Option ARMs will be the next leg of the credit crisis. No one can stop this from happening. Again, this is the reason we remain bearish medium-term and why we'll continue to load up on put options.

So, the next time someone says we or Meredith Whitney are wrong. . . just laugh in their face.

P.S. The opportunities we'll face over the coming months to make an absolute fortune, thanks to the Option ARM resets, are so numerous, it's mind-boggling. In fact, I'm so sure that you can land at least 50 double-digit trades in the next 12 months that $1,000 is yours if I'm wrong. Click Here To Find Out How You Can Collect.