Why Boone Pickens Says It's Bigger Than Oil

Written by Brian Hicks
Posted February 28, 2008
"You hear that? That's the sound of money. Every second I’m getting paid"

"I love it. When I'm eating breakfast, I'm making money. When I go out to a fine restaurant in Bakersfield, the bill is already covered. Heck, even when I’m asleep, a steady stream of dollars gets deposited into my bank account."

Cash was talking about the eight 1.5MW wind turbines he owns on his wind park, located in the Tehachapi Pass Wind Resource Area, approximately 100 miles northeast of Los Angeles.

The one thing you have to understand about wind parks - just in case you ever decide to visit one - is that the wind blows non-stop.

And the Tehachapi Pass is one of the windiest regions in America.

In fact, average wind speeds approach 20 miles per hour there. That's the daily average. This places the Tehachapi Pass in a wind power class 6 (these classes range from class 1, the lowest, to class 7, the highest).

On the day I visited, the wind was brutal. It was blowing steadily at 48 mph. And it was colder than cold. Jeff Siegel and I weren’t dressed for these elements.

In fact, it was difficult to stand steady. 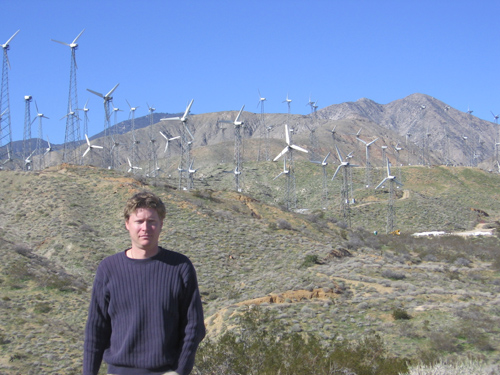 You see, Cash was absolutely right. Every time his turbine blades turned, he was sending energy to the grid owned by Southern California Edison. In return, SoCal Edison paid him for the energy he generated.

Cash isn't the only one cashing-in on the wind energy boom.

The wind energy industry has realized three consecutive years of record-setting growth. As a result, wind is attracting some heavy-duty investors. Even legendary Texas oilman Boone Pickens, who made his hundreds of millions in wildcatting for oil, is a believer in wind.

In a New York Times interview published recently, Boone was quoted as saying...

"I have the same feelings about wind as I had about the best oil field I ever found."

He is planning to build the biggest wind farm in the world, a $10 billion behemoth that could power a small city by itself.

That’s about twice that of all the homes that went black just a couple days ago after a forced shutdown of nuclear reactors in Florida left millions without electricity.

Boone is a genius. He realizes that no matter what the stock market does... even if the subprime mortgage disaster sinks housing further, Americans still need to keep the lights on. Period.

Unfortunately, there's only a few ways to play wind in the public markets. And 99% of the publicly traded wind companies are very small. But that's the appeal. I consider wind a tiny but exceptionally lucrative investment niche in the renewable energy bull market.

In fact, wind is where geothermal and solar energy were 3 years ago:

I believe 2008 and 2009 will be a breakthrough period for the wind energy bull market. If you haven't taken a position in wind companies, now is an excellent time to do.

Green Chip Stocks editor Jeff Siegel recently recommend a wind stock that he thinks is an easy double this year.