Reopening the Well from Hell

You know they must be thinking about it...

Well, if we could just shift to production... It's jolly well sealed at the top, after all.

Do the math and it's easy to see why.

If the field lasts five years, that'd go a long way toward paying for BP's Macondo expenses — costs which are not anywhere near being totaled, by the way. These lawsuits and fines will drag out for years (though hopefully not a decade).

And that 60,000 bpd figure is conservative. The nearby Thunderhorse field peaked at around 250,000 bpd in 2009. Those production numbers are spread out among multiple rigs, of course.

If we estimate that Macondo prospect could produce 180k bpd, that's $5.25 billion in revenue per year. That's more than halfway to restoring BP's previous annual $10b/year dividend. And BP has already said it "may" drill into the reservoir again at some point in the future.

What I'm wondering is if they'll try to convert those two relief wells into production ones. Must be tempting...

But it all depends on Thad Allen and the administration. 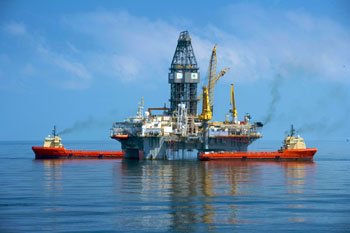 I started thinking about this when BP did the second static kill from the top. Why kill it when the cap was holding and relief wells were nearly done? The only thing that makes sense (to me anyway) is they will try to shift from "relief" to "production."

Now, I'm not an oil and gas engineer, so maybe there's something I'm missing here... But it does seem odd.

If BP does go to production of the Macondo prospect, expect it to be cotton candy — sugary and heavily spun.

Something along these lines:

In order to provide more money to Gulf residents, we plan to monetize this field as safely and thoroughly as possible.

We have decided that the safest way to kill the well is to drain it dry over the course of 10 years. Then it can never hurt us again.

(By the way, when I write those lines about what BP might be thinking, the voice in my head has a British accent. Strange, I know— especially since the company now has an American CEO, a good ol' boy from the Gulf. In all seriousness though, Dudley does seem to be doing a better job than Hayward was.)

Lawsuits from Gulf residents are obviously not BP's only courtroom concern.

And this is where it gets interesting.

Both partners have refused to help pay for disaster-related costs on the basis that BP was grossly negligent. And they have a pretty good case, from what I've read.

So what happens if/when BP starts producing from Macondo? Will partners demand their share? Or will they try to cut losses and avoid the legal nightmare?

Impossible to say, but it'll be interesting to watch it play out.

One more thing: Is BP a buy on the possibility of restarting production at the Macondo prospect?

Not really. Even if they get $5b/year from Macondo, that's a fraction of their $294b revenue over the past year.

Drilling back into the well from hell would be a tough sell politically. But BP has sweeping political influence worldwide. So if anybody can pull it off, they just might.

If they succeed, here's hoping for no more shortcuts when it comes to drilling operations.

The last thing we need is another blowout.