Wikileaks to Banks: You're Next

I'm starting to wonder if Julian Assange will be around much longer.

The man could almost be a James Bond villain: highly intelligent, cunning, arrogant.

And like every Bond nemesis, Assange is being hunted by MI6. 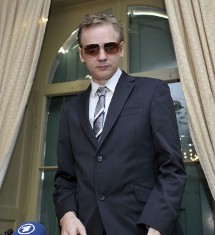 Today British authorities announced that they know the location of Interpol's new "Most Wanted" man. Assange is reported to be somewhere in England.

Any time now, he could be arrested and promptly shipped off to Sweden to face rape charges, which carry a potential 4 to 6 year prison term.

Yet in the wake of these charges, and massive fallout from their "diplomatic cable" release, Wikileaks isn't backing down.

They're ramping up the operation.

This week Assange announced the target of Wikileaks' next "megaleak", saying it will be a "big U.S. bank."

In a rare interview with Forbes, Assange teased the release...

(Just in case he hadn't pissed off enough powerful people this week.)

Mr. Assange compared the data to those notorious e-mails that helped expose Enron:

This will be like that. Yes, there will be some flagrant violations, unethical practices that will be revealed, but it will also be all the supporting decision-making structures and the internal executive ethos that comes out, and that’s tremendously valuable.

The NYT is reporting Bank of America may be the target of this leak. The basis for their hunch is a statement Assange made in 2009 regarding 5GB of data they had obtained from a BofA executive's hard drive.

5GB is quite a bit of data (if we are dealing with the same file Assange referenced in 2009). One can only imagine what sorts of interesting things could emerge from that much email -- as many as 600,000 documents according to the NYT piece.

And the way Wikileaks is hyping the release, I'm betting it will contain some juicy nuggets.

Bank of America stock was shaken up a bit earlier this week on speculation over the leak. And while the Wikileaks catalyst makes BAC a tempting short candidate, I'm staying on the sidelines.

Bank stocks have shrugged off some pretty horrific news over the past year, and they could certainly do so again. Not to mention that we don't know for sure which bank is the target, or how damaging the data will be. Too much risk, too much downside to shorting banks here, to my mind.

Besides, there are more intriguing opportunities to be found. I still like the short-treasuries trade, which I covered in detail here.

Palladium is on another tear, passing $760/ounce today. When we recommended palladium to readers last November, it was trading around $315.