Why Wal-Mart (NYSE: WMT) is Getting into Banking

America’s largest retailer, Walmart (NYSE: WMT), has been having some troubles lately. Yet its solution may inflict troubles of its own onto customers and every other American citizen, including you. 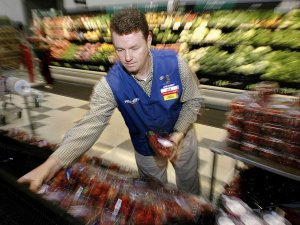 The discount retail chain has been losing market share on multiple fronts – in cyberspace to Amazon (NASDAQ: AMZN) and newcomer Alibaba (NYSE: BABA), in urban areas to deep discount variety stores the likes of Dollar General (NYSE: DG), and in rural areas to population displacement.

So the company has devised two rather ingenious (some would say sneaky) plans to improve its returns and prop up both the top line of revenues and the bottom line of net income – the former potentially harming its customers, while the latter has already been harming Americans overall.

Before we delve into these “creative” measures, let's first look at what has been hurting Walmart lately.

Wal-Mart is Losing its Walls and its Mart

Wal-Mart’s once impenetrable walls guarding its market share have recently been undermined by rising costs, and penetrated by competitors.

• Higher gasoline prices, a reduction in food stamp benefits, and rising rental rates have left its customers with less money to spend;

• A higher payroll tax, medical care inflation, and larger-than-anticipated health care enrolments under new healthcare regulations have increased the company’s expenses; the company raised its healthcare cost estimates for this year from $330 million to $500 million;

• In rural centers, declining populations have reduced same store sales; nearly half of Walmart’s Supercenters are located in towns of less than 500,000 inhabitants, 83% of which have experienced population shrinkage over the past two years as many unemployed migrate to cities, according to a report by BMO Capital’s Kelly Bania released July 15;

• In urban centers, the growing popularity of deep discount dollar stores has cut into market share;

Even before the latest Q2 report, analysts at Standpoint Research initiated a strong sell recommendation on Wal-Mart’s stock on May 28th. Out of 32 analysts giving their recommendations this month, 4 rate the stock a strong buy, 7 a buy, 18 a hold, 1 as underperform, and 2 a sell.

By contrast, deep discount retailer Dollar General (NYSE: DG) continues to enjoy strong growth and analyst praise, with UBS initiating a buy recommendation on September 12. Out of 26 analysts rating the stock this month, 8 call it a strong buy, 11 a buy, 7 a hold, with none rating it as underperform or as a sell.

As noted in the graph below, the damage to Wal-Mart and all retailers goes back to the financial crisis of 2008-09, since time deep discounters like Dollar General have stolen the show. Where DG’s stock (blue) has soared 175% over the past 5.5 years for gains of some 32% per year, Wal-Mart (beige) has grown only 60%, or 10.9% per year. Its growth has been stagnant for two full years since the summer of 2012.

Attempt to Boost the Top Line

Wal-Mart’s anaemic growth has prodded its management to come up with a clever plan to bring more consumer spending into its stores and beef up its sales revenues – the retailer is opening up its own banking service.

“GoBank is breaking down the barriers to traditional banking and brings the benefits of a FDIC-insured checking account that’s loaded with features to a large segment of Americans,” Green Dot CEO Steve Streit proudly announced.

The checking account charges lower fees than most banks – just $8.92 a month, as compared to most banks’ $10 to $15 fees – which can be waived by setting up a $500 monthly direct deposit. (That’s right, deposits of $500 per month; we’ll get to the significance of that later.) Other benefits include no overdraft penalties, free ATM use, bill payment and person-to-person transfers.

The GoBank account is aimed at the so-called “under-banked” or “un-banked” population – persons who transact entirely or almost entirely in cash, with little or no banking activity. While it is touted as an act of assistance to those of lesser means, we need to look past the spin at the real objective behind the plan. And it all comes down to that $500 monthly deposit feature noted earlier.

You’ve heard of a “captive audience”? Here we have “captive shoppers”. If people have money in an account held at Wal-Mart, they will be more inclined to spend it there, boosting the retailer’s revenues significantly. If just 1 million shoppers regularly deposit $500 each month and then spend it in its stores, revenues could grow by $500 million a month, or $6 billion a year. The average American spends more than $500 a month on food, clothing and personal care items. These checking accounts would simply shift those expenditures toward Wal-Mart.

Rather than help these “under banked”, an account held at a retail chain could actually cause them more financial harm, as there would no longer be a separation of savings from expenses. The idea in everyone’s mind will not be, “I have money at the bank.” But will instead be, “I have money at Wal-Mart.” This automatically makes them more inclined to say, “Let’s go buy something.”

While the plan may be promoted as a means of helping people save, it will have the opposite effect – it will facilitate more spending and less saving. But it’s great for Wal-Mart.

Attempt to Boost the Bottom Line

Yet the retailer isn’t stopping there. It has another financial scheme up its sleeve, this one aimed at cutting its income tax expense. How? By awarding its top executives larger bonuses.

The plan has already been in operation for several years, saving the company over $104 million in taxes since 2009 – money which rightfully belongs to you as an American citizen. Instead, it went to already wealthy executives.

A joint report by the Institute for Policy Studies (IPS) and Americans for Tax Fairness (ATF) released in early June revealed that “since 2009, Walmart has ducked $104 million in taxes by exploiting a tax loophole around bonus payments to just eight top executives”.

That $104 million “would have been enough to cover the cost of free school lunches for 33,000 children for those six years,” the report estimates. Meanwhile, the Federal government has had to reduce its food stamps program beginning late last year.

“The retail giant is using a longstanding tax loophole for deducting executive pay that comes in the form of stock options and other bonuses tied to company performance,” activist group Think Progress pinpointed. “The eight top employees tracked in the IPS/ATF report earned $298 million in deductible compensation from 2009 to 2014, creating nearly $300 million in write-downs for the company.”

That works out to $37.25 million to each executive over the last five years, or $7.45 million per year. And that’s just their bonuses over-and-above their regular salaries.

Of course, performance-based compensation is lawful, even beneficial as it spurs productivity that benefits the company’s growth. Only, in Wal-Mart’s case, the productivity these bonuses were supposed to spur have not materialized, as the retailer continues to stagnate. Yet, the bonuses are being paid anyway.

Hence the need to draw more money in through its new checking account scheme, all in the name of helping the little folk at the bottom. Yet, in light of the chain’s track record, it is difficult to see how anyone would benefit more than the big folk at the top.