Why The Gold Bears are Wrong

Take a look at the gold chart below. It is the enemy of gold owners. 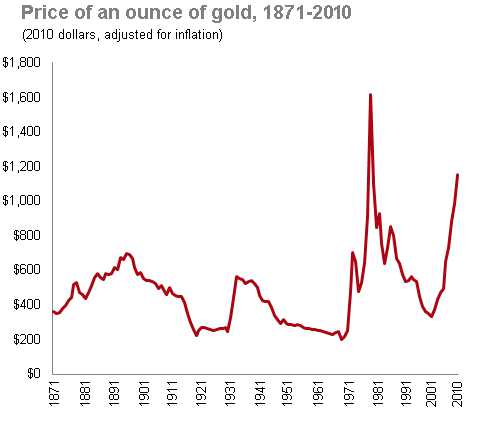 The chart was put together by John Ameriks of Vanguard.

Gold bears love seizing on charts like this one. The implied message is simple: Gold is a bubble.

It's certainly understandable that some gold longs get freaked out by charts like this (that is the goal, after all).

My advice: Wait until you've heard the other side of the story before doing something crazy like calling Cash4Gold and getting ripped off.

The big problem with this line of reasoning is that it simply looks at long-term commodity prices to predict future ones. There are too many factors at play when you're dealing 100+ year data sets. It's faulty logic.

But a few concerned readers have forwarded me Mr. Ameriks' article, so I'll debunk it as thoroughly as possible.

Before I counter the gold-bear case, it's only right that we hear Mr. Ameriks out.

Here are some quotes from his piece, where he makes the case that gold is wildly expensive on a historical basis:

Bottom line: Any value that gold has as an investment appears, historically, to have accrued to investors who had a position prior to certain episodes of economic or financial distress. And to generate truly eye-popping returns from a gold-based strategy, you’d have needed to be selling at the peaks of these past price spikes, not buying.

The basis for making an investment in gold now is a conviction that the worst is yet to come. I’m not saying it can’t happen. But looking at how far these prices have come already, and thinking about the kinds of truly disastrous events that are included in this 140-year period, I’m skeptical.

So according to Mr. Ameriks, investors who wish to profit from gold need to buy low and sell high. Groundbreaking stuff, truly.

Seriously, though... John is obviously a smart guy and he does make some interesting points. That's why I think it's important to debunk each of them.

Here's the flip side.

Gold Is Not a Bubble

What was happening 139 years ago? Virginia was re-entering the Union as part of the Reconstruction. Utah had just granted women the right to vote, and a little project called the Brooklyn Bridge was getting underway. 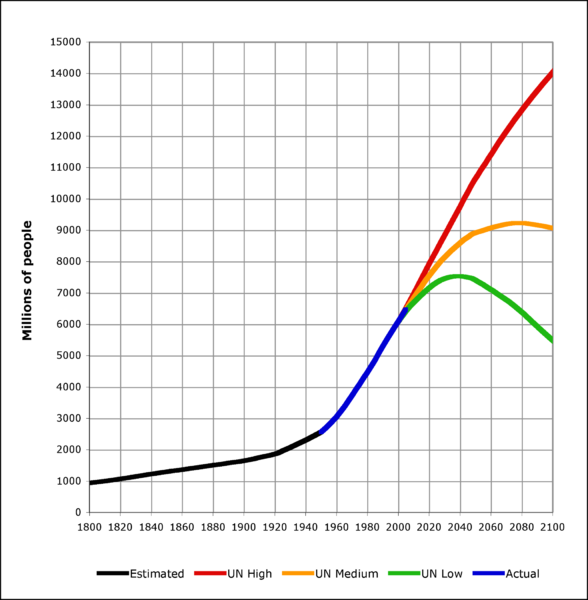 Contrast that with today, where we have almost 7 billion humans stumbling around looking for coffee, or the local stimulant drink of choice, on any given morning.

By the way, take a look at the red line, denoting the U.N.'s high-side population projection. 14 billion people on Earth in 2100? Well, that should be interesting.

As I mentioned earlier, basing your outlook for any commodity on long-term prices leads to very misleading conclusions.

For example, take a look at this chart of historical silver prices (it also conveniently overlays the gold/silver ratio, displayed on the right scale).

Does that mean silver will ever approach those levels again? Of course not. As you can see in the chart, huge silver discoveries in the New World flooded the market with silver, degrading its value greatly.

Gold became the favored hard currency due to continued scarcity and superior shininess, and the rest is history.

Prior to the mid 1900's, gold was simply a store of wealth. That's all. Gold was money — often tied directly tied to major currencies like the dollar, and interchangable with many of them.

Back then, gold wasn't used in everyday items like HDMI Monster Cables or iPhones.

Back in the day, industrial demand for gold was essentially nill. You don't need the perfect electrical conductor, gold, which is highly malleable, resistant to corrosion, and shiny/pretty, until you have a huge market for electronics.

And as far as I can tell, gold as an ingredient in liquor is only a recent phenomenon.

Mr. Ameriks last point is probably his most interesting. He says, "The basis for making an investment in gold now is a conviction that the worst is yet to come."

Huh? I figured anybody who follows finance already knew that the worst is yet to come. Another meltdown is simply inevitable.

States are broke, and the Feds are too. Entitlement programs are starting to buckle under the weight of baby-boomers. We're going to print our way out of this one, and it will not be pretty. Mr. Bernanke has just begun the monetization.

The double-dip has already begun, and the next round of quantitative-easing is probably no further than 6-12 months away. GDP is disappointing, the jobs numbers are horrible, and housing data is downright ugly.

All these things are why I own gold stocks, and a little bullion too.