What to do When Russia Invades

Protection for when Conflict Arises

With tensions in Ukraine at an extreme high, visions of a familiar Russian enemy have once again risen.

If Russia’s conflict with Ukraine continues on its current trajectory, relations between Russia and the West may deteriorate considerably. Already the G7 members (U.S., Japan, France, Germany, Italy, U.K. and Canada) have pledged to boycott the upcoming G8 summit planned for June in Sochi, Russia. The US has even voiced its desire to kick Russia out of the G8 altogether.

What’s their beef with Russia? The G7 is abhorred by Russia’s “clear violation of the sovereignty and territorial integrity of Ukraine”, an ex-Soviet republic on Russia’s southern border. Over 100 have been killed and more than 1,100 have been injured in protests over the past few weeks, and Russian troops have been mobilized.

The implications of the conflict are more than just political, but economic too, with a number of markets already being affected.

To understand what economic implications the conflict might trigger, we need to look at what Ukraine contains that is so important to Russia.

Although Ukraine became an independent nation in 1991 from its capital in Kiev, its southernmost province of Crimea has remained an autonomous parliamentary republic within Russia, with its own Constitution of Crimea, and its own capital at Simferopol.

Russia’s interest in Ukraine comes from its vast wheat fields which Russia heavily depends on given what little grows in Russia’s mostly frozen regions. Moreover, important pipelines connecting Russia’s oil and gas fields to Europe run right through Ukraine, while important rail and transportation corridors connect Russia to Southern Europe from the Balkans to Italy.

To protect its economic interest in Ukraine, Russia retained control of the nation’s southernmost province of Crimea. Its location on the shores of the Black Sea gives Russia immediate access to Ukraine’s underbelly, and has become a staging area for Russia’s Black Sea naval fleet, making Ukraine’s Russian-controlled forces the second largest military in Europe.

Russia started to get nervous when most of Ukraine favored closer ties with the European Union. Under pressure from Russia, Ukraine’s then president President Viktor Yanukovych sided with Moscow and refused to sign a political association and free trade agreement with the European Union in November, 2013 – triggering the massive wave of protests that has engulfed the region since then.

Caught in the middle of this tug-of-war between Europe to the west and Russia to the east has left Ukraine’s finances in turmoil. When Ukraine seemed to be moving closer and closer to an EU trade agreement in mid-2013, Russia decided to twist Ukraine’s arm by refusing to buy Ukrainian products, barring all imports from the country by August.

Within just three months by mid-November, Ukraine had lost over $4 billion in closed exports to Russia. The resulting record current-account deficit has forced Ukraine to dip into its foreign reserves to cover expenses, spending some 33 percent of its reserves over the past 12 months - which have fallen to some $16 billion, their lowest since 2006.

Ukraine’s financial plight has sent its currency – the hryvnia – into freefall, losing some 15 percent of its value versus the USD in the past three months, as noted below. Similarly, Russia’s rubble has plunged some 13 percent versus the USD for its escalated involvement in a potential Ukrainian civil war between Russian-alignedCrimea and the EU-aligned remainder of Ukraine. 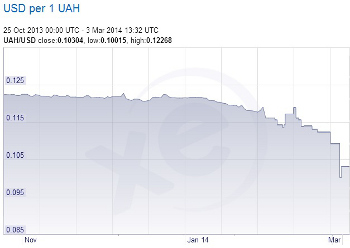 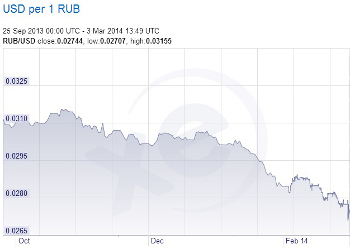 While Moscow’s benchmark index Micex fell 9.4 percent on Monday, global chief economist Michala Marcussen at Société Générale sees potential for widerspread market turmoil. “The escalation of the crisis is clearly a shock to emerging market sentiment,” Marcussen informed the New York Times. “We have to be aware of market psychology.”

The Euro Stoxx 50 index of large-cap companies in the euro zone fell 2.6 percent on Monday, while London’s FTSE 100 was down 1.8 percent.

Given Ukraine’s crucial location in east-west trade, the negative effects of its political and financial crises clearly will not be contained within its borders, but will spill-over into neighboring regions.

The primary concern is that Russia supplies about 25 percent of Europe’s gas, half of which flows through Ukraine. The Russian government has not been afraid to cut off gas supplies to Europe in the past, and is posturing to do the same again.

Speculators have already been driving up natural gas and crude oil prices. Natural gas rose 2.1 percent last Friday and another 1.7 percent today, with crude oil rising over 1.8 percent over the same two days.

Gold has also been living up to its status as a safe haven in times of crisis, rising $30 today or some 2.19 percent, with the potential for higher prices as events unfold.

Ukraine is also one of the largest grain suppliers, ranked among the top three producing regions in the world. Fears of disruptions to wheat supplies drove wheat futures up 2.2 percent on Friday and another 4.6 percent today – totalling over 6.8 percent in just the two days.

The potential for large price spikes in oil, gas and wheat - as well as plunges of the Russian rubble and other neighboring currencies – has increased all the more given the U.S.’s threat of sanctions against Russia’s products. Secretary of State John Kerry stressed yesterday that the U.S. is “absolutely” willing to impose sanctions, with President Obama confirming he is “currently considering all options”.

Another sector that will likely be hit hard is the European bond market, with yields expected to rise to compensate investors for the increased risk throughout the region. Ukraine will be faced with $13 billion worth of bonds maturing this year, with another $16 billion maturing by the end of 2015. Desperately low on cash and with rapidly depleting reserves, its government is running a serious risk of defaulting.

“Ukraine cannot survive without reforms in the next few months.” Eyes are turning to the International Monetary Fund for a possible loan of the $35 billion Ukraine as requested in financial assistance.

So while resource commodities such as oil, gas and wheat may be enticing to speculative investors, bonds and emerging market funds are areas to avoid. The crisis in Ukraine could not have come at a worse time for emerging markets, which have already been reeling from capital investment withdrawals and currency devaluations since mid-2013.

This is one contributing impetus behind the recent U.S. bond rally, as the 10-Year treasury note climbed in value, its yield falling 18 basis points from 2.78 percent to 2.6 percent over little more than a week. Investors are fleeing from risky markets to more secure ones.

Yet prudent investors will keep a close eye on developments in Ukraine, waiting for the crisis to end for a potentially profitable migration in the other direction. By the time the crisis ends, European bond yields will be higher than they have been in years, and will give speculators an opportunity to move their gains earned in oil, gas and grains over to bonds and currencies as they look to ride the cycle back the other way.

For the time being, however, commodities should be snapped up and European bonds should be dumped – especially Ukraine’s.