What I Learned at the Ethereum Conference

I’m sorry it took so long to get this digital currency information out to you.

More than likely, you feel bombarded by digital currency investing information this week.

That's fair. Bitcoin and Ethereum have both made investors triple-digit gains this year.

Considering that's more profit than most people see in a lifetime, it's no surprise the media is all over it.

That said, the purpose of me writing this isn’t to bombard you with more of the same statistics.

Today, I want to provide you with some information that demonstrates where the digital currency sector is heading in the coming years.

Recently, I had the privilege of attending the Second Annual Blockchain Conference in Washington, D.C.

Blockchain is also a powerful tool that has drawn the attention of major companies. Those companies are now working with blockchain and associated digital currencies to develop their businesses.

At the conference, I got to rub shoulders with seasoned digital currency investors, Bitcoin experts, and the corporate heads in charge of researching this technology.

And from them, I learned an interesting truth: Digital currency as we know it is still in its infancy. But we are moving fast...

More and more companies are doing research on Bitcoin and Ethereum and associated blockchain technologies.

This indicates that we are just now sighting the tip of a profit iceberg.

It also means we are just starting to see the ways digital currency and blockchain technology can change our world.

The Rise of Ethereum

At this point, I bet you’ve heard about Ethereum.

In the past couple of months, the digital currency has been covered by Fortune, Forbes, Wired, and the Wall Street Journal.

To date, Ethereum offers one of the most powerful versions of blockchain technology.

But before Ethereum became a media darling, we were covering it on Wealth Daily. In fact, back before it boomed, we wrote a research piece about why Ethereum was poised to do well.

At the time, the digital currency was sitting around $90. 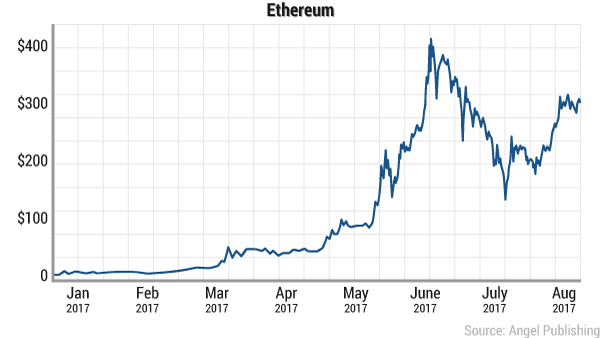 If you had invested after reading that article, you would have tripled your profits.

I don’t say that to brag. Rather, I want to demonstrate how fast profits are being made in this rapidly evolving space. That’s why we put together our digital currency trading guide...

We didn't want investors to miss out.

That said — even though Ethereum soared over 350% since our initial article — the Blockchain Conference indicated that things are just getting started for this particular digital currency and its underlying technology.

It’s not fair to talk about the groundbreaking events Ethereum kick-started without explaining what Ethereum is.

If you’re already an Ethereum expert, feel free to skip over this. But if you are curious about how this digital currency has managed to rack up massive gains in five months, keep reading.

First off, Ethereum is more than just a digital currency. It's a powerful platform that allows programmers to develop groundbreaking applications. The unique structure of the Ethereum blockchain could help businesses:

As an investor, you don’t need to understand how blockchain technology makes these things possible. You just need to know that it has the potential to change the way we conduct business and do finance.

That is why Ethereum has managed to garner massive corporate support. It is backed by a 150-member corporate alliance known as the Enterprise Ethereum Alliance. Members include major industry players like:

That is why Ethereum was such a hot topic at the Second Annual Blockchain Conference.

These companies, many of them Fortune 500s, are getting ready to launch the servives using blockchain technology.

The One Big Company Talking About Blockchain

One of the most notable companies committed to blockchain research is IBM. That name should certainly ring a bell.

A Silicon Valley juggernaut, IBM is one of the most powerful companies in the world. And it has devoted an entire section of its development team to working with blockchain research.

The company wants to use blockchain to protect its customers' identities.

In March, IBM launched its first business-friendly blockchain service. Clients of that service include Wal-Mart, Northern Trust, and the Bank of Tokyo-Mitsubishi UFJ.

Outside of IBM, dozens of companies and federal entities announced plans for blockchain and associated digital currencies.

All of these speakers made one thing abundantly clear: No one is turning their backs on this technology.

They are all embracing blockchain, which sets the digital currency up for some positive milestones down the road.

And now it's time to talk about those Bitcoin Conference projections...

One of my favorite parts of digital currency conferences is the crazy Bitcoin projections.

It is the one point of the conference where everyone is on the edge of their seats.

At above $4,000 a bitcoin, the digital currency has created a legion of cryptocurrency millionaires.

But will it continue to do so?

According to experts at the Blockchain Conference, the answer is yes.

My personal favorite was the projection from Paul Tatro, the founder of the Blockchain Training Institute.

Billionaire venture capitalist Tim Draper thinks we could see $10,000 Bitcoin as early as 2018!

I hope you enjoyed my conference wrap-up. It's important to know we are at a pivotal moment for digital currency and its underlying technology.

Author's Note: An earlier version of this article used the term "Ethereum" to refer to related to blockchain technologies. It has since been modified.