Vegas Is Open, but Nobody Cares

I’ll be the first to admit that the headline is a little misleading.

Las Vegas opened back up this past weekend, and people definitely showed up. Even more than expected were there to roll the dice.

But who really cares that you can gamble in casinos again when you’ve got this stock market?

Just look at the rally and look at some of the stocks that have soared if you need proof that Vegas and Macau have been closed for a few months. The gamblers are all out in force in the stock market, tweeting about their genius moves and how Warren Buffett is “washed up.”

Bankrupt Is the New Black

Frothy doesn’t even begin to describe current conditions. Speculative might even be an understatement.

It seems if you want your stock to shoot up, all you’ve got to do now is declare bankruptcy and you’ll get a double at least.

Hertz, the car rental company, filed for bankruptcy protection in May. Its shares got as low as $0.40. But just this past week, they got blown up and soared all the way to around six bucks before closing the day at $5.50. 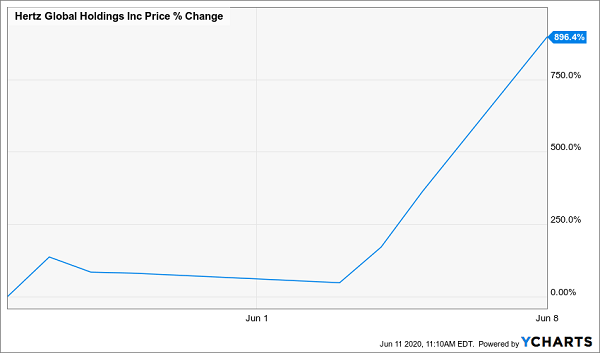 Then there’s Whiting Petroleum. It declared bankruptcy at the start of April. Shares dropped to about $0.36. But between last Friday and this Monday’s close, they got all the way up around $3.50. 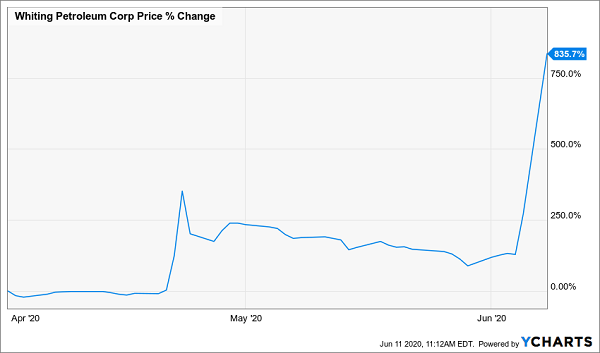 Betting on a recovery might account for the stupidity we saw in Hertz and Whiting. But how about betting on a resurgence of brick-and-mortar retail? It was doing SO well before the pandemic forced shoppers inside for two months.

Well, that’s just what “investors” have been doing with JCPenney. It’s been hurting for years and declared bankruptcy in mid-May. Shares got hammered down to $0.11. But this week, they got gambled right back up to $0.63. Doesn’t sound like much, until you see it on a chart: 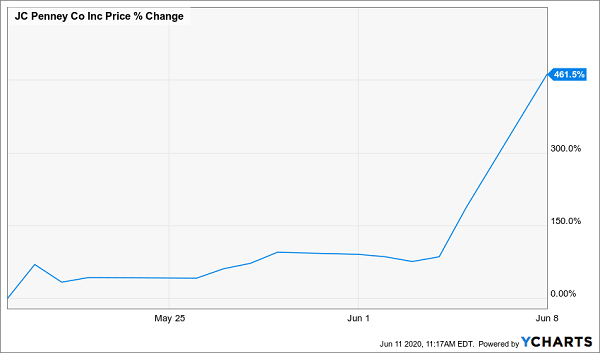 A 461% gain in a couple of days on a failed retail store that’s already filed for bankruptcy protection.

Or, we can look at my favorite from this week: Chesapeake Energy. Last Thursday, shares cost $13. By this Monday’s close, they were up to $70. Didn’t matter that the company had $9 billion worth of debt it couldn’t service on Thursday, Friday, and Monday. The market bid shares up over 400% anyway. 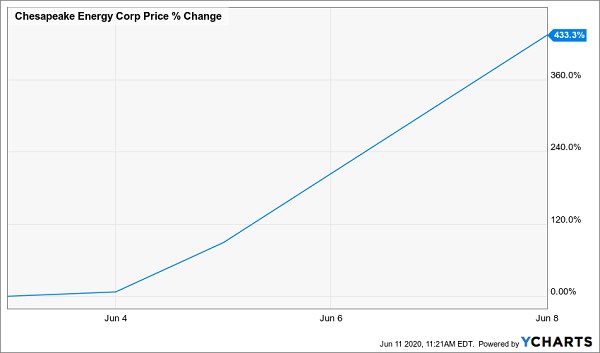 Now, let me tell you a little bit about how bankruptcy works.

There are several levels of ownership of a company. The most junior is equity — people who own common stock. The most senior is bank loans with protective covenants. The debt falls between those. You’ll have senior debt, sometimes mezzanine debt, and even more junior debt in some cases.

But the thing is that once you pay off all those other people, there’s almost always nothing left for the equity investors. That means, when those companies exit their restructuring, the whole company is going to be owned by the debt-holders and the folks who owned common stock will get wiped out.

You might start to argue with me that distress investors love bankrupt companies. And you’d be partially right. But you’d be suffering from a misunderstanding about how distress investing works.

Distress investors are experts in debt, negotiations, and bankruptcies. They NEVER buy common stock in a company; they go after the debt and make the decision whether to try to load up on the senior secured notes or buy out the credit facilities.

They want to own the debt because that puts them at the top of the list to get paid in the restructuring. They know that buying stock in a bankrupt company will see that stock wiped out. So, they ONLY go after debt.

When you see people bidding up the price of a bankrupt company, that’s not investing. It’s rolling the dice in the hopes you can find someone dumber than yourself to pay you more for the broken company you just bought.

What Happens to Bankrupt Stocks 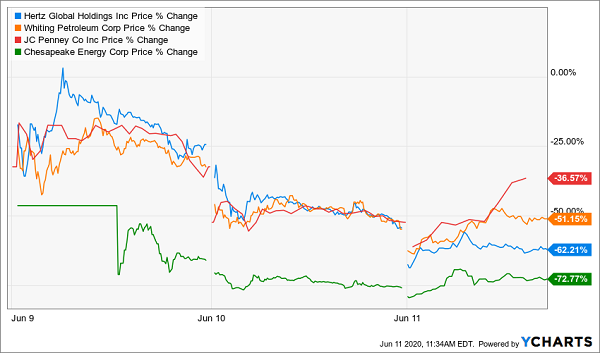 That’s what happens when the shares of bankrupt companies soar. They come crashing down to earth and bring all those gamblers with them.

What’s an Investor to Do?

But seeing all this frothiness and watching other people at least claim to be making massive gains, it’s tough for an investor to stay calm and carry on with the plan.

It’s exciting to dream about that one trade that will make you a millionaire overnight. And it’s even more exciting to make the buy you think is going to catapult you into retirement. So, it’s easy to get caught up in the hype.

But that’s just what this seems to be turning into — a very overhyped market. The runs in bankrupt companies show the hype. The runs on stocks with negligible sales and negative earnings (a fancy way to say "constant losses") is reminiscent of the dot-com bubble and ensuing collapse.

Even the commentary by the day traders is the same. They’re all geniuses, and the people who’ve been managing billions of dollars for years are washed up hacks.

But, I think Mark Cuban put it best when he said earlier this week that, “if you're a day trader and you can walk and chew gum, you are making money right now,” just like it was right before the dot-com bubble burst and ruined many speculators.

And he’s right. But you remember the kinds of gains that came right before the bubble burst? They were massive. So, you can’t just sit it out and wait for the drop to come.

You’ve got to keep dancing until the music stops. But be ready for it to stop on a dime. Markets are buying the rumors right now that everything will be back to normal soon. When we get some real, definitive data about where we actually stand and how long it’ll actually take to recover, I’d bet they’ll sell the news.

But for now, you’ve got to stay in and just get yourself ready for what you’re pretty sure is going to come.

Trim down your portfolio to only your favorite companies. Sell some positions and realize some of the gains you made with tactical buys during the March rout and the following rally. Get yourself some cash together so you’ve got money to spend if we’re right and there’s still another shoe to fall.

And if you’re interested in learning about an investment that’s not only survived, but actually prospered during past recessions and even depressions, I’ve got an opportunity for you. It’s something that Forbes called “the best investment you’ve never heard of.” And it’s been used by the super wealthy to generate thousands of dollars in monthly income for decades.

Now, you can take advantage of this special loophole too and collect tens of thousands of dollars in what we’ve lovingly termed the “Farm Cash” program.

And again, please, please, please stay away from bankrupt companies unless you’re the manager of a distress debt fund and an expert in bankruptcy negotiations.