Uranium prices are breaking out.

And thanks to increasing demand and tight supply, prices could be headed even higher.

When uranium prices bottomed out last summer, Wealth Daily took notice and started telling you about it...

Back in August, Ian Cooper told readers: “Uranium just became the hottest story of the year — and quite possibly the 'supply-demand' buying opportunity of a lifetime.”

He hit the nail on the head. Since that time, the price of uranium has increased some 60%.

Ian told subscribers, “One company set to benefit significantly is Cameco (NYSE: CCJ), the co-owner of the world's biggest uranium mine.”

Wealth Daily members who bought CCJ on Ian's recommendation have returned a 52% gain so far.

But Ian wasn't the only Wealth Daily editor telling you about uranium...

A few weeks later, Chris DeHaemer wrote: “The downtrend [in uranium prices] has been broken and we'll start to see higher highs as well as higher lows.”

In his article, Chris talked about Uranium One (TSX: UUU) and Denison Mines (AMEX: DNN), which have returned 70% and 119% gains respectively since he wrote the article.

Even Angel Publisher Brian Hicks wrote to you a few months back, calling Uranerz Energy (AMEX: URZ) “the single uranium stock you need to own right now.”

At the time, he urged Wealth Daily subscribers to buy shares of Uranerz Energy at $1.50: “Buy URZ at current levels for triple-digit gains in the coming months.”

Since that time, shares of URZ have more than tripled, paying investors a 267% gain. Shares of uranium miners like Uranerz and the others have been reacting positively to surging commodity prices.

Since bottoming out at $42 in June, the price of uranium-oxide (U3O8) jumped to $70 per pound this week for the first time since April 2008 as demand for the nuclear fuel ramps up. 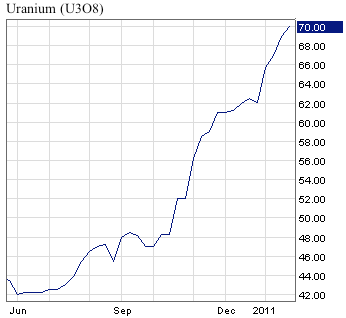 In the term market, TradeTech also reported two transactions that involve the delivery of 900,000 kilograms of U3O8 between now and 2017. The company reported on additional transactions of 1.6 million kilograms to take place through 2021.

With global demand screaming higher, another leading uranium consulting firm, UxC, says traders may be “scared into buying, fearing that if they wait, they would end up paying much higher prices.”

At least one utility, Taiwan Power, seems to think uranium prices are headed higher. The state-owned electric power utility was reportedly looking to buy 180,000 kilograms of U3O8 itself by July 31st.

Utilities like Taiwan Power and others are concerned that a future supply deficit in the uranium market may drive prices higher.

Even in today's global uranium market, there is a supply deficit.

More than half of the uranium-oxide that's produced from mined material comes from Kazakhstan, Canada, and Australia.

The deficit has been supplied by secondary sources, including stockpiled uranium held by governments and utilities.

One major secondary source has been the Megatons to Megawatts program, a non-proliferation agreement between the United States and Russia to convert high-enriched uranium (HEU) taken from dismantled Russian nuclear weapons into low-enriched-uranium (LEU) for nuclear fuel.

This program aimed to recycle 500 metric tons of Russian weapons-grade HEU (the equivalent of 20,000 warheads) into LEU.

Back in September, USEC Inc. (NYSE: USU) — the U.S. government’s executive agent for the Megatons to Megawatts program — announced 400 metric tons of Russian HEU warhead material has been eliminated. And the program is scheduled to end in 2013.

That means other uranium sources will be necessary to meet future demand...

By 2014, annual global demand of U3O8 is projected to approach 96 million kilograms. This is expected to leave a 36 million kilogram deficit, which is likely to result in higher prices both for the metal and for those companies capable of bringing uranium to market.

Companies in the uranium sector could very well deliver spectacular gains for their shareholders.

Uranium should be on every investor's radar. 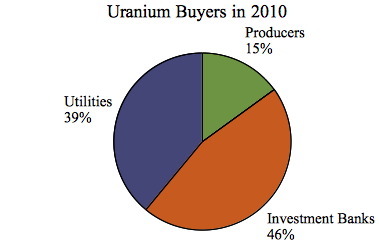 These junior firms have not caught up with their senior mining competitors, and shares of these junior stocks remain largely overlooked and significantly undervalued for the time being.

Chris just finished putting together a short video to tell subscribers about his latest recommendation: an obscure junior mining stock aiming to prove they are sitting on a piece of a massive uranium-bearing formation in Mongolia that's already estimated to contain up to 23.8 million kilograms of U3O8.

Earlier this week, he was telling me this company is still a tiny $26 million firm. And trading at just $0.50 right now, he thinks share prices have some incredible upside potential...