The U.S. is certainly advancing on a path toward recovery, but we’re still afflicted with unemployment at 7.5 percent. That, in a nutshell, is Federal Reserve Chairman Ben Bernanke’s strongest argument for continuing the Fed’s asset-buying stimulus program. 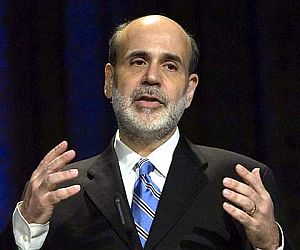 Indeed, he has gone on record arguing that curtailing the stimulus now (that is, prematurely) would reflect adversely all around, especially since the effects of the recent sequester have yet to really take hold.

“A premature tightening of monetary policy could lead interest rates to rise temporarily but would also carry a substantial risk of slowing or ending the economic recovery and causing inflation to fall further,” Bernanke said today in testimony to the Joint Economic Committee of Congress in Washington.

Although Bernanke indicated that some small downward adjustments may occur in the Fed’s pace of stimulus (a statement that caused stocks to dip down a bit), the general takeaway from his statements yesterday was that more data is needed over a longer time before the Fed would feel comfortable making any serious pullbacks in stimulus.

The market reaction probably is not of much concern, since nearly any word from the Fed will cause some response. In this case, the S&P 500 dipped 0.8 percent to close at 1,655.35 in New York yesterday.

By keeping interest rates low, the Fed is basically trying to push investors into, well, investing – preferably, in riskier investments that can carry higher returns, which would send the ripple-effect of the Fed’s own stimulus actions further into the market. And, of course, lowered borrowing costs mean the general public is likely to be more keen on refinancing, drawing down debt, and thereby having more spending money.

Thus far, the Fed’s work has borne decent results. Economic growth has picked up, and projections are healthy for the near future. The S&P 500 is up 16 percent overall in 2013.

Meanwhile, the benchmark lending rate remains near zero (it has been so since December 2008). The Fed’s balance sheet has ballooned to $3.35 trillion – something that has drawn sharp criticism from fiscal hawks – from its mid-2007 total of just $879 billion.

Clearly, the stimulus is going to keep going for some time yet. Bernanke remains assured in his determination to keep it going until either of two things occurs: the unemployment rate hits 6.5 percent, or inflation threatens to rise above 2.5 percent. Neither are even close at this point.

At this point (and based on the recent conference), the best we can do is observe the next 3-4 months. That’s the timeline the Fed has outlined for a review of the economic and labor trends.

Therefore, although stocks shot up after Bernanke declared that it’s too early to think about reducing the stimulus project, utilities sank later (and effectively erased these gains) after he warned that continued labor improvements could mean the Fed pulling back on the asset-buying pace.

But this should be good news for those invested in gold. When it became clear that the Fed is not about to end its stimulus program anytime soon, gold rose significantly – spot gold was up 0.2 percent to $1,378.29/oz. Increased demand from China also buoyed the precious metal.

This is a welcome relief for gold, which has been under pressure recently both from speculation about the termination of the Fed’s stimulus programs and from the rally in precious metals like platinum and palladium.

Gold, thus far in 2013, is down 18 percent overall. Silver, meanwhile, was up 0.5 percent yesterday to $22.49/oz. Silver has been a strong performer recently (due to its wider industrial applications).

China and India comprise the two biggest buyers of gold bullion in the world, and improved demand from China helped gold’s gains. After all, it’s now cheaper for Chinese buyers to import gold from abroad.

Nonetheless, it’s hard to recommend investing heavily in gold right now given the pressures from platinum and palladium, both of which are almost surely going to go up in the near future. Continued problems in South African mines and supply shortage – plus increasing demand – all add up to prices skyrocketing as far as platinum and palladium are concerned.

Moreover, auto sales are on an uptick, and both metals are extensively used in the auto industry. Gold, in contrast, accounts for just 10 percent of industrial applications.

Continued Stimulus Positive for Gold
After the Federal Reserve's Chicago President said stimulus should continue, gold reacted positively.
Federal Reserve Faces Stimulus Dissent
The Federal Reserve plans to conduct a review of its stimulus program after minutes from its January meeting showed criticism among members...
Biotechs and Stimulus
Stimulus efforts in both the U.S. and Japan have supported the biotech industries in those nations. And they have the aging populations to back it up...
Buffett's Envy: 50% Annual Returns, Guaranteed
Warren Buffett once told investors at an annual shareholder meeting, "...it's a huge structural advantage not to have a lot of money. I think I could make you 50% a year on $1 million. No, I know I could. I guarantee that."