The U.S. Mint has increased the premium charged for American Silver Eagle bullion coins from $1.50 to $2.00 per coin due to higher production costs.

The Mint does not sell American Silver Eagles directly to the public, but distributes the coins through a network of Authorized Purchasers, who resell the coins to other bullion dealers, coin dealers, and the public.

The price for American Silver Eagles sold to Authorized Purchasers is determined based on silver content plus a premium.

The U.S. Mint's American Eagle series of bullion coins has become very popular over the past few years. Sales of the American Silver Eagle increased 191% between 2007 and last year. 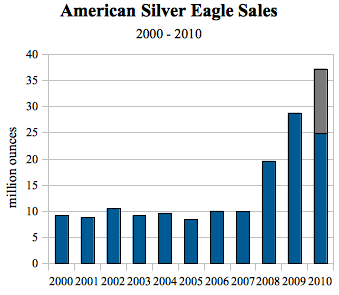 To help ease the buying pressure from the gold, silver, and platinum American Eagle bullion coins – and to support a major mining company in his home state – Montana-based Republican Denny Rehberg recently introduced new legislation that called for the production of a new American Palladium Eagle bullion coin.

I recently published a new report on this new American Palladium Eagle bullion coin and what it could mean for palladium prices and you as an investor. I called the report simply The New American Palladium Eagle Bullion Coin. You can read this free report now by clicking here or by copying and pasting the following link into your internet browsers address bar: http://www.wealthdaily.com/articles/the-new-american-palladium-eagle-bullion-coin/2749