Yesterday we kicked off a two-part series addressing the question: If you had to buy one stock that you couldn’t sell for 30 years, what would you buy?

If you haven’t read Part 1, check it out here to learn why Kimberly-Clark (NYSE: KMB) has a market position and a rising dividend that should be safe for at least 30 years.

At the end of Part 1, we gave you a hint about the stock we’re looking at for Part 2: that it has nothing to do with toilet paper, but that you could make one of its logos out of toilet paper.

Turns out you can also just buy toilet paper with that logo on it. 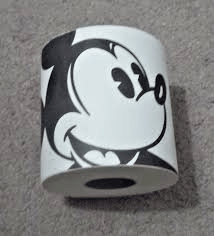 You might be surprised to see a growth stock like Disney (NYSE: DIS) in this “buy and hold for 30 years” series. After all, the last year has been a rather inauspicious one for the category.

The FAANG stocks (Facebook, Amazon, Apple, Netflix, and Google) were once the darlings of growth investors, but today four out of the five are down for the year. Disney, on the other hand, is up more than 20%. 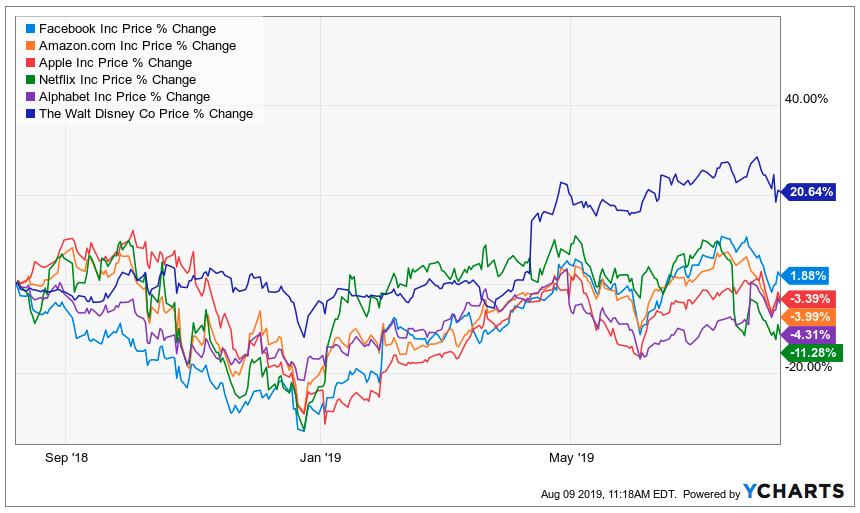 How has this media conglomerate avoided the decline suffered by competitors like Netflix? And why does our research team believe it should continue to thrive for at least three decades?

To be a good growth stock, you obviously need growth. Earnings growth, to be specific.

Disney has consistently delivered rising earnings per share (EPS) over the last 30 years — and there’s good reason to think it will continue to do so for the next 30 years while maintaining a reasonable valuation.

As you can see from the graph below, Disney’s share price has appreciated by about 1,370% over the last three decades. When you factor in reinvested dividends, that return rises to 1,890%.

But over the same time period, its EPS has exploded by roughly 4,360%! In fact, it’s only dipped into the negatives twice in that time period — once in the mid-1990s, and again during the early-2000s recession. 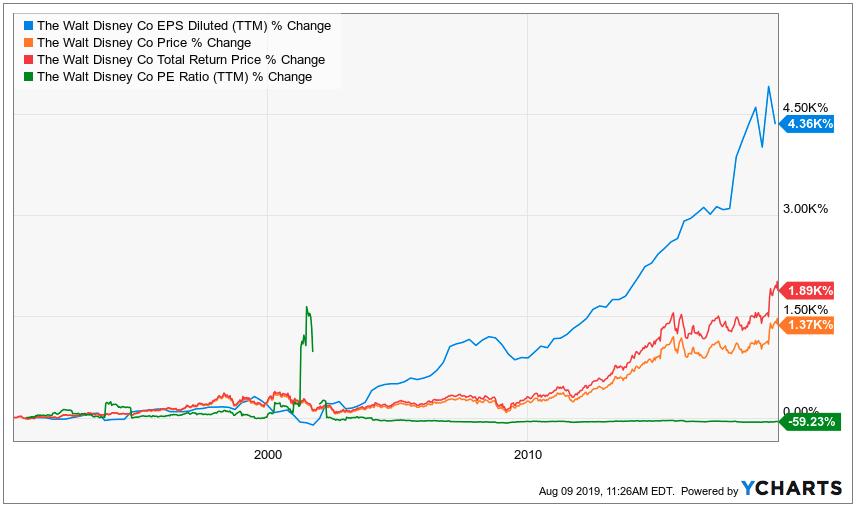 Between the steady price growth and the exponential earnings growth, Disney has seen a long-term decline of 59.23% in its price-to-earnings ratio over the last 30 years.

As we said, Disney and our last pick, Kimberly-Clark, do have one thing in common: They’re both multi-brand behemoths with gigantic shares of their respective markets.

Kimberly-Clark controls a plurality of toilet paper sales in the U.S., and Disney, for better or worse, owns a huge and ever-growing portion of this country’s pop culture canon.

Over the last few decades, it has bought some or all of the intellectual property of 20th Century Fox, Pixar, Lucasfilm, Marvel, and ABC (and its subsidiary ESPN), just to name a few acquisitions. Those purchases have brought everything from Star Wars to Toy Story to SportsCenter under its umbrella.

ESPN is worth discussing on its own; it’s the most valuable cable channel in America. People don’t think of Disney as a major TV power, but as you can see below, it was neck-and-neck with NBCUniversal for the largest share of last year’s national TV market. 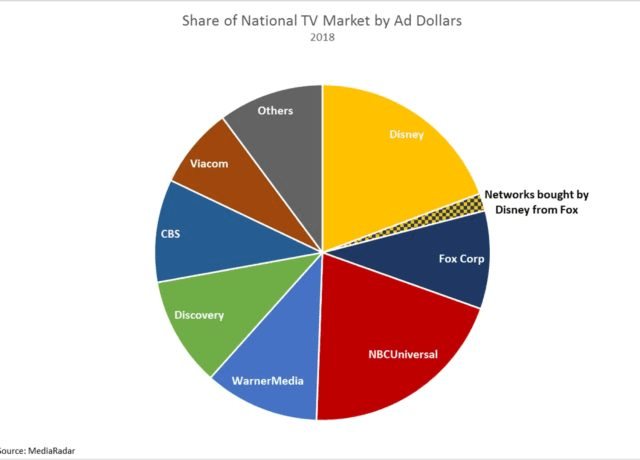 It’s a similar story with the movie business.

Disney is rapidly taking control of a plurality of box office revenues. Its growth in this area has accelerated precipitously since its acquisitions of Marvel (2009) and Lucasfilm (2012). 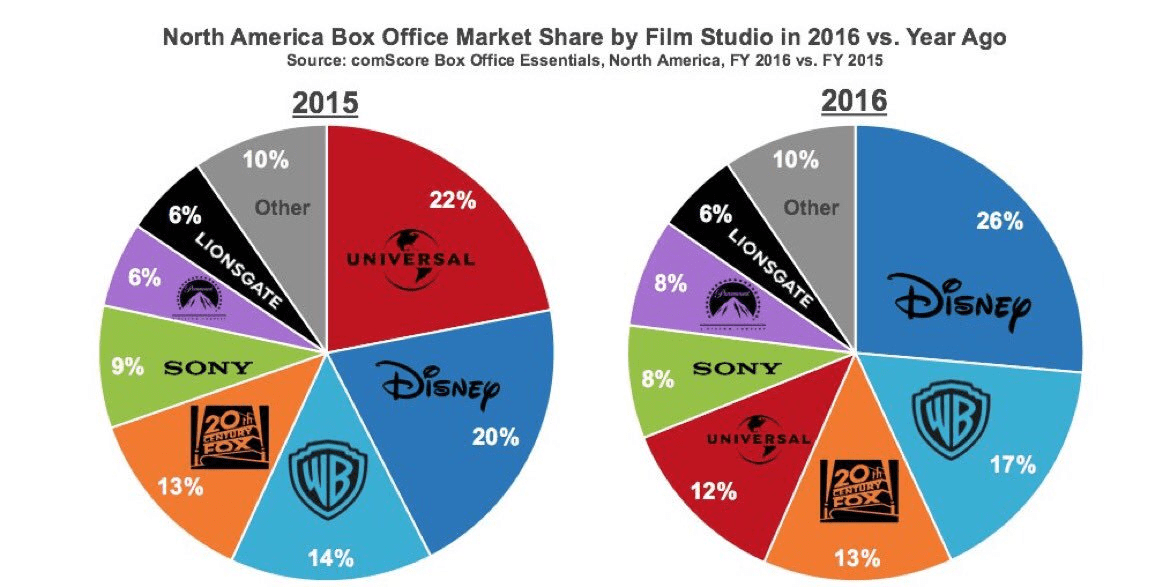 On a more philosophical note, consider Disney’s control of some of this country’s biggest subcultures. It’s almost unsettling.

It’s got sports culture locked down through ESPN. It’s got an iron grip on the increasingly mainstream nerd culture through Lucasfilm and Marvel. It’s obviously a dominant producer of all sorts of children’s media — that’s its original core business, after all.

Disney, through its ownership of some of the biggest movie and TV brands, has an almost-permanent place in the American mind. And it has a proven ability to monetize its cultural output in a way that leaves its competitors in the dust.

We asked our research team which two companies they would buy and hold for the next 30 years. They came back with the toilet paper people and the Mickey Mouse people.

These choices aren’t really surprising when you consider that both of these firms combine a dominant position in the market with a proven capacity for steady growth. If you’re looking for more of these stocks, check out The Wealth Advisory.

Two Stocks to Hold Forever: Part 1
This is Part 1 of Wealth Daily contributor Samuel Taube’s series on two stocks to hold forever. Today’s pick has a solidly boring business model that should keep investors in the black for decades to come.
Why I'm Shorting Netflix, Inc. (NASDAQ: NFLX)
With so many new SVOD services hitting the market over the next six months, Netflix’s growth will begin to slow.
What Are the Best Investment Opportunities of 2019?
Bear market or not, 2019 is brimming with opportunity in these select few stocks. Wealth Daily editor and technology expert Jason Stutman guides readers to the sectors with the most profit potential for 2019...
Buffett's Envy: 50% Annual Returns, Guaranteed
Warren Buffett once told investors at an annual shareholder meeting, "...it's a huge structural advantage not to have a lot of money. I think I could make you 50% a year on $1 million. No, I know I could. I guarantee that."