The Smartest Guys in the Room

One of the very first benefits (and probably the best one) I got from working with Morgan Stanley was the company I got to keep.

I’m a pretty smart guy, if I do say so myself. And my momma agrees.

But I’ve always preferred not to be the smartest guy in the room. I like teaching, but I prefer learning from the people I surround myself with.

And starting off in fixed-income sales and trading gave me the opportunity to rub elbows with the smartest people on Wall Street: bond traders.

You see, bond traders deal with par values, not prices. Bonds are usually quoted at a par value of 100.

Depending on whether you want them really badly or not that badly, the value is then adjusted.

But if you didn’t really need them that bad, you’d offer something like 98.5, or 1.5% below their par value.

Then you’ve got the interest rates, because bonds pay interest…

When you pay more than par value, it cuts into the effective yield you get from the bonds.

And vice versa, when you pay less than par, it adds to the yield you’ll collect on that bond.

Fixed-income traders need to be able to do all that math in their heads. And most of the ones I worked with had advanced degrees in math or engineering from schools like Harvard and MIT.

But I’m not telling you all this to brag about the guys (and gals) I used to work with at Morgan.

I’m telling you so that when I get to the next part, you understand why we should be listening to the signals coming from the bond market right now…

When Cool Is Still Hot

You see, last week, we got December’s CPI numbers.

And the headline, as you already know from my article on Friday, was lower than November’s headline.

It came in at 6.5%, as expected. And markets celebrated the fact that inflation was easing.

The thing is that the United States economy is about 75% services. And every single service got more expensive — and by a lot more than 6.5%.

Those are the sticky parts of inflation, too. You can release oil from the Strategic Petroleum Reserve (SPR) and lower gas prices.

But you can’t release workers from some strategic labor reserve and stop wage growth.

To see exactly what I’m talking about, check out my article from last Friday.

I included charts that detail how much more expensive everything REALLY is.

But I digress. What I’m really trying to get at is that the most recent inflation report does not suggest that the Federal Reserve can or will stop hiking interest rates.

Inflation is still raging and interest rates need to get higher to kill it.

And anyone who knows enough to dissect the headline CPI number knows that.

But the bond traders — the smartest people on Wall Street — are betting not only that the Fed will stop raising interest rates this year, but also that it will start cutting them before 2023 is over.

What’s in a Number?

And how do I know this, you may be wondering…

Well, all you have to do is look at the prices being paid on the fed funds futures markets.

Remember, if the price is below 100, then people are getting a discount.

But the thing about the fed funds futures markets is that the discount offered is a prediction of where the fed funds interest rate will be in the month that contract expires.

Now, as those traders bet that the fed funds rate will go up, the value they’re willing to pay for the bonds goes down.

So traders expect the Fed to hike rates by a quarter of a percent, or 25 basis points, at the next meeting and bring the average rate for February up to 4.595%.

As we go down the calendar, though, those decreases stop…

The August contracts are going for 95.135. September’s cost 95.17% of par. October is at 95.24. And the discount keeps getting smaller and smaller all the way out to August 2024 (the longest-dated contract actively trading at this time).

That suggests the bond traders are betting that the Fed CUTS rates in 2023.

And that wouldn’t be a big deal if it weren’t for the fact that the Fed members have ALL said that they won’t be cutting rates in 2023.

They’ve said they’ll likely pause come May. But nobody’s talking about cutting them.

Nobody except the smartest people on Wall Street.

When They Talk, I Listen

But maybe we should be paying attention to what the bond markets are telling us. They’ve been pretty good at predicting where the fed funds rate is going in the past. 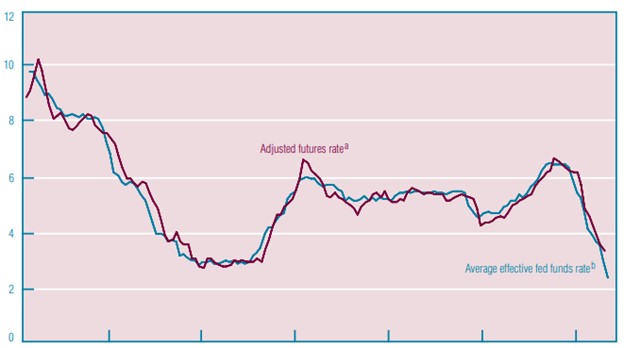 So maybe there's good reason to bet that the Fed blinks in the face of the recession they’re driving headlong into.

I don’t think the Fed will have the guts to really drive the economy into the kind of recession that’s needed to kill this inflation, especially going into an election year like 2024.

I hope I’m wrong, because I’m not a fan of what that waffling will cause, which is slowing growth and growing inflation.

But the bond markets are saying that I might just be hitting the nail on the head.

So I’ve got another message for investors today, and that’s to tighten your seat belt…

Because if I’m right and the bond traders are right, then we’re heading for a period of stagflation.

And stagflation is not kind to stocks.

The last time it reared its ugly head, the indexes lost 10 years of gains and all finished the decade with an inflation-adjusted loss.

But we’ve got your back and we’re prepared to help with whatever the markets throw at you this year.

So keep your eyes out for our emails. We’ll all get through this together.