The Real Cost of Banned Cigarettes

Should CVS' Ban Change Your Mind?

Yesterday’s announcement by the largest integrated pharmacy company in the U.S. - CVS Caremark Corporation (NYSE: CVS) - to stop selling tobacco products in its more than 7,600 stores by October 1st is truly ground-breaking. 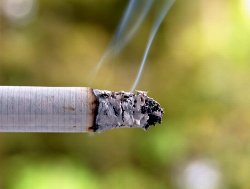 This is more than just a retailer’s decision to permanently pull a product off its shelves. It is a commitment to its customers to put their health above the company’s own profits. It is a signal to competitor pharmacies to follow suit or fall behind in public relations. And it is a sounding alarm to the tobacco industry that its steadily shrinking sphere of influence has just tightened some more.

The decision’s implications are more widespread than many realize, affecting more than just CVS itself.

What it Means for CVS and Pharmacies

The most immediate impact of CVS’ decision to stop selling tobacco products is the loss of more than $2 billion a year in tobacco revenue to its own top line, which could be seen by many as neglecting shareholder interests.

Serving more than 60 million plan members and operating more than 800 health clinics, CVS has made a commitment to promote and facilitate the good health of its clientele. It can’t in good faith hand beneficial products to some clients at one end of the store, and hand harmful products to other clients at the other end.

CVS President and CEO Larry J. Merlo declared the sale of tobacco products to be “inconsistent” with the company’s very purpose. “Ending the sale of cigarettes and tobacco products at CVS Pharmacy is the right thing for us to do for our customers and our company to help people on their path to better health,” he emphasised.

CVS isn’t stopping there, either. “In addition to removing cigarettes and tobacco products for sale,” Merlo announced, “we will undertake a robust national smoking cessation program.”

Yet the change in policy will affect more than just CVS. It will affect the entire pharmacy sector as CVS becomes something of a role model for others to follow.

Steve Connelly of the Boston ad agency Connelly Partners pointed out the marketing benefits of the decision as “both admirable and marketable. From now until the end of time, CVS will be the first ones who did this.”

Something tells me they shan’t be the last.

But as more and more pharmacies inevitably follow suit, won’t they be shooting themselves in the foot? After all, they are in the business of dispensing drugs to sick patients. Turning smokers off of tobacco will reduce the number of patients they can sell drugs to. So not only will they be losing tobacco sales, they will be losing drug sales as well.

Dr. Troyen Brennan, CVS Caremark Chief Medical Officer, noted that “stopping the sale of cigarettes and tobacco will make a significant difference in reducing the chronic illnesses associated with tobacco use”. An article published on the Journal of the American Medical Association’s website yesterday pointed out the paradox that this anti-tobacco policy presents…

“Most pharmacy chains are retooling themselves as an integral part of the health care system,” the article informed. “They are offering more counselling… an array of wellness products… are moving into the treatment arena… to address common acute infections, are gearing up to work with primary care clinicians to assist in treating hypertension, hyperlipidemia and diabetes - all conditions exacerbated by smoking.”

So the pharmacy industry’s expansion into treating illnesses caused by smoking will be undermined by the industry’s war on tobacco. That seems pretty counterproductive.

But in truth, it is not as self-defeating as it may seem.

Some 18 percent of American adults smoke. Even if every single pharmacy stopped selling cigarettes, you can rest assured most smokers will simply get their nicotine fix from the next store down the block.

While pharmacies will inevitably follow CVS’ lead and shut down their tobacco counters, tobacco sales will simply be displaced from them to other retailers. Convenience stores and gas stations will continue to sell it, as will grocery and corner stores everywhere.

This displacement of tobacco sales will simply mean that pharmacies will focus their efforts more completely on disease treatment and prevention.

Sign up for the free Wealth Daily e-letter below.

In each issue, you'll get our best investment research, designed to help you build a lifetime of wealth, minus the risk.


By signing up, you'll instantly receive our new report: North America Shale Dividend Guide.... Finding The Most Profitable Investing Opportunities For Your Portfolio.
We Protect Your Privacy

Investors shouldn’t be changing their holdings based on CVS’ decision to stop selling tobacco. Pharmacy stocks are still as viable after the policy change as they were before it. Even if tobacco related diseases do decline gradually over the next 50 years, you can bet the pharmacies will still be in business treating other ailments.

And as the tobacco sales of one pharmacy are spread out across the four or five other tobacco vendors down the street, the increased business to those shops will be too negligible to make a difference in their stocks – most of whom aren’t even publicly traded.

There really is no reason for investors to change a single holding because of CVS’ decision, not even among tobacco producers. While the percentage of adult smokers has declined significantly over the decades - from 42 percent of American adults in 1965 to just 18 percent today – there has been almost no measurable decline in over 10 years.

You might say we’re at the point where only the die-hard smokers remain, and it will take a lot more than just anti-smoking commercials to stop them. Not even a disease can stop them.

Yet over the long term, things will be quite different. We can tell they will be due to the dramatic reduction in teenage smokers, which estimates put at 50 percent less than the 1960’s, as compared to the 24 percent drop among adults. And fewer teen smokers today mean fewer adult smokers in another decade or two.

Now something will have to replace that vice. If they stop buying tobacco products, they’re not simply going to save their money at a bank. We all know how poor the West is at saving. When people have money in their pockets, they’ll spend it.

So if they won’t be spending so much on cigarettes or cigars, they will more than likely spend it on snacks and other treats. Why is that? Because smoking satisfies more than just a nicotine fix. It satisfied the primitive desire to bring something to our mouths and eat.

It has long been known that smoking becomes a substitute for eating. Smoking satisfies that primitive command that is constantly telling us to bring food to our mouths, a desire that is hardwired in the primitive part of the brain of all animals.

So if people smoke less and less, you can bet they’ll be eating more and more, as the impulse to bring something to their mouths is the real habit behind smoking.

Investors who want to make a change to their portfolio in expectation of fewer tobacco sales over time might consider adding cookie and biscuit makers, such as:

Take a cigarette out of a smoker’s hand and you can bet they’ll be reaching for cookies, granola bars and ice cream. Anything that brings hand to mouth in satisfying of the basest of all desires.