The Outlook for Commercial Real Estate

Four Reasons to Run, Not Walk From This One

According to the Federal Reserve, U.S. household net worth fell by $1.3 trillion in the first quarter, proving that green shoots are something of a fairy tale for the U.S. consumer, at least.

In fact, since its peak in the third quarter of 2007, household wealth has decreased by 21.6%, or more than a fifth. That is the most dramatic fall in the series since reporting began more than 50 years ago.

Yet somehow, the bulls keep pounding the table, saying there is light at the end of the tunnel, even though consumer spending is over 70% of the U.S. GDP.

Now, I don't understand how anyone could possibly think the consumer is coming off the mat given that type of wealth destruction.

Instead, I'm firmly in the camp that believes a "new normal" has begun, and it's based upon frugality more than frivolity.

Meanwhile, caught between a rock and a hard place during this change is a worsening outlook for the commercial real estate market.

Unfortunately, it gets worse everyday. . .

Commercial Real Estate... in the Crosshairs

That's because as unemployment surges, home prices continue to drop, and more wealth evaporates, consumers are more likely to slam their wallets shut rather than open them.

As a result, without an uptick in jobs and income, another debt-financed binge like the one we just lived through is as likely as a blizzard on the 4th of July in Key West. It simply isn't going to happen.

It can't be re-created either — even though the Fed is trying its best to do just that.

So, what we're essentially left with is a classic case of overcapacity, since the massive demand all that cheap money pulled forward can really only happen once.

What we don't have — or what we have a lot less of — are people who can support it all. Sure, money still exists, but it has very little velocity when the game suddenly turns frugal.

That has the effect of turning our consumption-driven society on its head, leaving household names staring down the barrel of bankruptcy. And believe me when I tell you it is going to get worse before it gets better.

Along the way, though, so many things we have accepted as "absolute givens" are going to be stressed to the breaking point.

That was the day Chicago-based General Growth Properties (GGP) — the second-largest mall owner in the United States — filed for bankruptcy in federal court.

After all, GGP's bankruptcy filing was simply the tip of the iceberg. With more than $530 billion in commercial mortgages coming due in the months ahead, we could be facing another real estate collapse as dangerous as the one in housing.

That makes GGP the equivalent of a dead canary in a coal mine, as this cycle of distress will undoubtedly take others down. General Growth Properties will certainly not suffer alone.

"This is kind of the beginning of the end," Dan Fasulo of Real Capital Analytics said recently. "This bankruptcy will drive down the values of mall assets in the United States. It's going to put, I believe, more supply on the market than can be absorbed by investors."

In short, it is a complete re-run of what just happened in residential real estate, but this time it's on the commercial side. The only difference in this case is the timing, which shouldn't surprise anyone.

After all, commercial real estate typically lags what is going on in residential by about 18 months. And 18 months ago, Freddie Mac and Fannie Mae were trading over $30. Today, they are wards of the state.

That leaves us with a commercial real estate market that has much further fall.

The Outlook for Commercial Real Estate: Why This Market Has Further to Fall

At this very moment, there are four critical elements to this crisis — and they're all bad news.

1. Commercial property values are in a free-fall — In fact, according to the Wall Street Journal, four years worth of gains in value have been wiped out since the beginning of 2008. And it's possible property values could fall by as much as 50% from their peak when all is said and done. Take a look:

2. Vacancies are soaring — You don't even need me to tell you about this truth. Just take a look around your local mall, shopping plaza, or office complex. In many cases, it's like an absolute ghost town. In fact, vacancies are expected to reach 13.5% for retail and 17% for office buildings by year's end, eliminating a portion of the income necessary to make the mortgage.

The end results are defaults and delinquencies, as was the case with General Growth Properties. Moreover, delinquency and default rates for securitized commercial real estate loans are expected to continue soaring at an astonishing rate, according to research firm Reis Inc.

Here's what I mean: 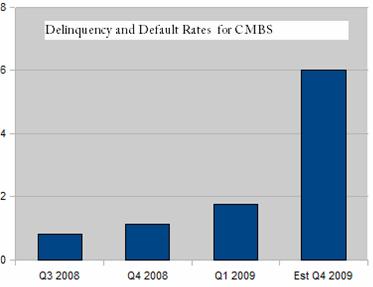 3. Refinancing is NOT an option — The vast majority of commercial real estate mortgages are designed differently than the mortgage you might typically use to buy a home.  In most cases, commercial mortgages are actually designed to be refinanced after a period of 5 to 10 years.

But because of the recession, banks have made the underwriting standards much more difficult these days. Sound familiar?

And as for securitized commercial mortgages? Forget it — as this graph proves, that game is over. 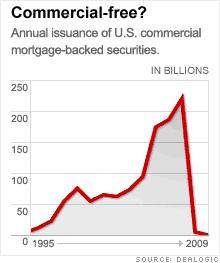 So, with roughly $530 billion in commercial mortgages coming due for refinancing in 2009-2011, and some estimates showing that as many as 68% of loans maturing during that time will FAIL TO QUALIFY for refinancing, you have to wonder how it will all get done. The short answer is... it won't.

As Federal Reserve Bank of Atlanta President Dennis Lockhart said earlier this week, the mortgage bonds due this year and next "are coming up against capital markets not active enough to deal with those maturities."  When that happens companies go under. 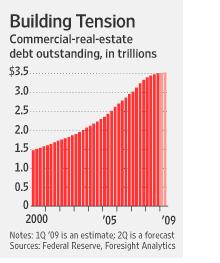 Unfortunately, as you can see, there's no shortage of paper that needs to be rolled over.

4. Numerous interest-only loans are about to reset — Principal is now coming due on about $179 billion of interest-only loans that were written between 2005 and 2007. As in residential real estate, these loans were designed to give commercial borrowers lower monthly payments to boost cash flow. That allowed them to push the envelope in terms of the amount of money they financed. However, principal payments eventually come due, boosting the mortgage cost.

Now, with soaring vacancies and falling rents, some of these cash-strapped borrowers will undoubtedly have to default. About 87% of mortgages sold in 2007 were interest onlys, compared with 48% in 2004.

And in another mirror image of the housing bubble, loose underwriting and dangerous loan products will only lead to increasing defaults.

Taken together, that makes a commercial real estate collapse the next shoe to drop in this long decline — especially given the massive loss of household wealth.