The Next Rare Earth...

When you think of a strong material, wood, concrete, or steel probably come to mind... 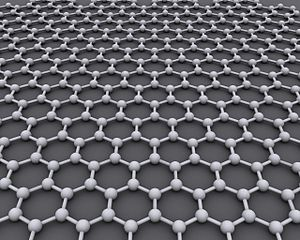 But they fail in comparison to the superior properties of graphene.

For those who don't know, graphene is a single layer of graphite, one atom thick.

That's right — it's the same material that's in your pencil tip.

But it is a pure material with unprecedented strength: ten times stronger than steel and six times lighter.

It can also conduct electricity, and therefore can be used as a transistor.

And that's just the tip of the iceberg for this material of the future.

First, let me tell you the amazing story of how it came to be...

Back in 2004, a couple of scientists working at the University of Manchester wanted to see if they could get a single layer of graphite.

At the time, this nanomaterial — which is shaped like chicken wire (the Buckminster Fuller six-sided shape) — kept wrapping itself in a tube.

The scientists, Andre Geim and Konstantin Novoselov, asked a grad student to shave the thinnest layer of graphite he could.

After looking under a powerful microscope, it was determined to be more than 1,000 atoms thick. They then took their sample to a powerful machine that could see and manipulate atoms.

While waiting for their colleague to prepare the highly sensitive equipment, our heroes noticed the operators used Scotch tape to clean the machine, picking up dust and particles...

Geim and Novoselov won the Nobel Prizes in 2010 for their discovery. Since then, hundreds of researchers the world over have jumped on the bandwagon in an effort to make this incredible material useful.

Graphene has a high strength-to-weight ratio, making it the perfect material for use in automobiles, rockets, boats, windmill blades, and airplanes.

Nikhil Koratkar, professor in the Department of Mechanical, Aerospace, and Nuclear Engineering at Rensselaer, said:

Not only does graphene have the strength of a flat Buckyball, but it makes excellent transistors.

The sheets are so thin, you can control the binary on/off switch by applying an electric field. This is impossible to do with metals because you can't make metal films thin enough without losing transmission abilities.

As a result, graphene-based transistors can run at higher frequencies and with more efficiency than the silicon transistors in common use today.

That means graphene is faster and uses less power.

Graphene is the material of the future. But like rare earth metals, it is in limited supply...

Ahead of the Curve

My associate Nick Hodge is the chief editor and creator of the market-beating Early Advantage letter.

As such, he is constantly ahead of the technology curve.

Nick was investing in Chinese batteries before anyone knew what lithium was, leading to a near-400% win on BYD. He was doubling money on solar stocks years before Solyndra went bankrupt. And now he is tracking the winners and losers in the next material revolution.

If the classic Dustin Hoffman movie The Graduate came out today, the one word Mr. McGuire would say to Benjamin wouldn't be "plastics"... it would be graphene.

Nick Hodge is pre-approving members for his free presentation on graphene.

The seminar takes place on March 22nd at 7 p.m. (EST). You must be registered to take part, so take a minute today to sign up here.

Don't miss out. The cost is nothing but a little of your time.