Palladium is getting ready to hit fever pitch.

Soaring demand from the global auto industry and others could slingshot palladium prices into the stratosphere as global mine production falters and government sales disappear.

This means your final opportunity to establish a well-positioned investment in palladium is rapidly approaching.

In just a minute, I'll show you a few ways you can start investing today and reveal my #1 North American palladium stock for 2011.

But first I want to tell you about one politician's fight to create a new American Eagle bullion coin — and one public U.S. palladium company in particular that would substantially benefit.

Recently introduced legislation in the U.S. calls for the production of a new American Eagle bullion coin to be minted in palladium.

With palladium currently trading at about $570 an ounce, an American Palladium Eagle coin would offer precious metal investors a good price entry point between gold (~$1,300/oz) and silver (~$21/oz).

Here's how I see it breaking down:

According to the bill, the American Palladium Eagle would contain one troy ounce of .9995 fine palladium and carry a legal tender face value of $25.

Weinman's also famous Mercury Dime “Winged Liberty” design would be featured on the obverse of the American Eagle Palladium coin. The reverse would showcase a high relief version of Weinman’s 1907 American Institute of Architects medal.

I asked our internal graphic designer here at Angel Publishing, Gina Wright, if she could create a design that might be used for the new American Palladium Eagle. And I think what she came up with is great. 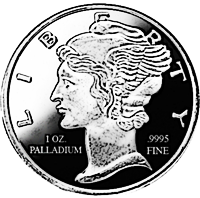 Contrary to the nickname it was given, the roman god Mercury was not shown on the “Winged Liberty” dime, but instead is actually the mythical figure of Liberty wearing a Phrygian cap to symbolize liberty and freedom.

The legislation introduced by Congressman Rehberg requires that the primary source for the material used in the American Palladium Eagle coins to be from domestic supplies. The bill stipulates:

The Secretary shall acquire bullion for the palladium coins issued under this subsection by purchase of palladium mined from natural deposits in the United States, or in a territory or possession of the United States, within 1 year after the month in which the ore from which it is derived was mined.

The state that Mr. Rehberg represents — Montana — is the only location in the United States where palladium is mined. So you can understand his interest in the production of a new American Palladium Eagle bullion coin.

The two major palladium producing mines in Montana are the Stillwater and East Boulder Mines, both owned and operated by Stillwater Mining (NYSE: SWC).

Stillwater's Montana palladium mines suffered setbacks last year when General Motors cancelled a contract for the precious metal opting instead to purchase it from foreign sources.

If approved, however, Rehberg's legislation could create new demand for palladium from Stillwater's mines. So much so that...

Investments in American Eagle precious metal bullion coins have increased drastically over the past few years.

Sales of the American Gold Eagle increased 616% between 2007 and last year; sales of American Silver Eagles increased 191% over the same time.

Sales of American Eagles minted in platinum — a closer relative to palladium than gold or silver — skyrocketed so fast in late 2008 that the U.S. Mint had to halt production. 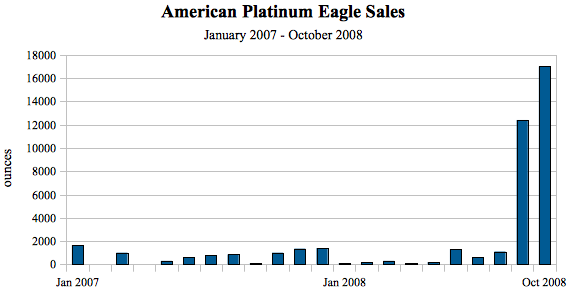 The U.S. Mint still hasn't been able to keep up with the soaring demand for the American Platinum Eagle bullion coins.

Over the summer, the Mint announced it would produce 10,000 American Platinum Eagles. When the Platinum Eagles were released in late August, they sold out in less than a week. At $1,700 an ounce, they sold $17 million in bullion coins... And there are still thousands of people on the waiting list.

We may expect the demand for an American Palladium Eagle coin to be similarly heavy, especially considering the metal's lower/mid-level investment price entry point.

We can consider the popularity of the ETFS Physical Palladium Shares ETF (NYSE: PALL) as a barometer of the potential popularity of an American Palladium Eagle, since both investments are based on a physical bullion investment.

Since it was released in April 2007, physical palladium holdings in PALL have increased 5,211%. 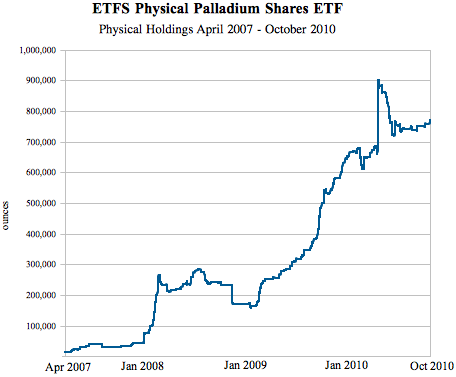 So there's no doubt that demand for an American Palladium Eagle would be quite heavy.

I estimate that initial demand for Palladium Eagles would be between 250,000 and 375,000 ounces for the first 12 months of production, based on demand of other precious metal American Eagle bullion coins, the demand for the palladium ETF, and the metal's appeal as a cheaper alternative to gold and platinum.

Under the proposed bill to produce the American Palladium Eagle that we talked about earlier, Stillwater Mining (NYSE: SWC) would benefit tremendously.

If my estimate of palladium demand for the production of American Eagles of 250,000 to 375,000 ounces is correct, the majority of Stillwater's annual production would initially be sold directly to the U.S. Mint.

But if demand increases further, Stillwater could be selling all of its domestically produced palladium to the U.S. Mint.

Right now the lion's share of Stillwater's product is sold under a long-term contract with Ford (NYSE: F), but this contract expires at the end of the year... And it's widely expected that Ford will not renew its contract with Stillwater and opt to buy palladium from cheaper, foreign sources.

So the passing of this bill would be crucial to Stillwater Mining.

In order to become law, the bill H.R. 6166 must be approved by both the House and Senate and then signed into law by the president.

There have been several attempts over the past two years to create palladium bullion or collector coins. However, none has been successful. So Congressman Rehberg may be fighting an uphill battle.

Personally, I would love to see palladium added to the American Eagle series of bullion coins, domestically sourced or not.

While the demand for palladium and prices continues to increase year after year, shares of major palladium companies like Stillwater and North American Palladium (NYSE: NAP) are likely to head much higher in the future.

However, there are a handful of smaller junior palladium exploration companies getting ready to return triple- and quadruple-digit gains...

My #1 North American palladium stock for 2011

On the Northwestern shores of Lake Superior, bordering Ontario and Minnesota, the small port town of Thunder Bay is home to just over 100,000 people.

It's been long known that just 50 kilometers north of Thunder Bay, geologic structures are similar to those of the Russian giant Norilsk-Talnakh deposits — the largest nickel-copper-palladium deposits in the world.

For decades, there has been one major setback with the minerals found at Thunder Bay...

Until recently, explorers only found low-grade ore that was often uneconomical to process.

However, modern mineral exploration technology has led the way for the discovery of several new high-grade deposits in the past few years.

These deposits currently have estimated resources of:

In total, these resources would be worth nearly $1.9 trillion out of the ground.

The entire region now has significant potential to be a major North American nickel-copper-platinum-palladium camp, as recent discoveries have demonstrated the presence of high-grade mineralization.

There are a handful of smaller companies exploring and developing similar nickel-copper-platinum-palladium projects — including one that I'm particularly excited about...

I've already taken up too much time here. There's a lot more to the palladium story that I want you to hear.

In fact I just updated my latest report — one that I put together for an investment buddy up in New York.

I'm going to publish this report for paid subscribers of my Underground Profits investment advisory and to the Wealth Daily website next week...

But you can check out this report before I do that — by clicking here or copying and pasting the following link into your internet browser's address bar: https://www.angelnexus.com/o/web/23291