The Most Profitable Cannabis Investment You Can Make Today

It's Time to Invest in Cannabis Legalization

I was 17 the first time I bought cannabis.

A girl in my home economics class sold it to me.

Her name was Theresa. She had big hair, a big attitude, and a very big operation that I suspect made her a lot of money.

We stayed in touch for many years after high school, and actually became quite good friends. And while she no longer capitalizes on an underground cannabis operation in the suburbs of Northern Maryland, she still enjoys cannabis.

Working as a yoga instructor in Southern California, Theresa is actually quite successful. She’s worked with a handful of celebrities in Hollywood with most of her business being private sessions. She also invests in cannabis these days, both for economic and social reasons.

Like me, Theresa understands that by investing in the cannabis space, we are investing in a mechanism that can help dismantle the war on drugs. Sure, we look forward to the profits, too. Theresa was actually an early investor in OrganiGram (TSX-V: OGI). She picked up shares after I recommended the stock back in 2015, when it was trading at around $0.40.

Today, shares of OrganiGram are going for about $1.70. 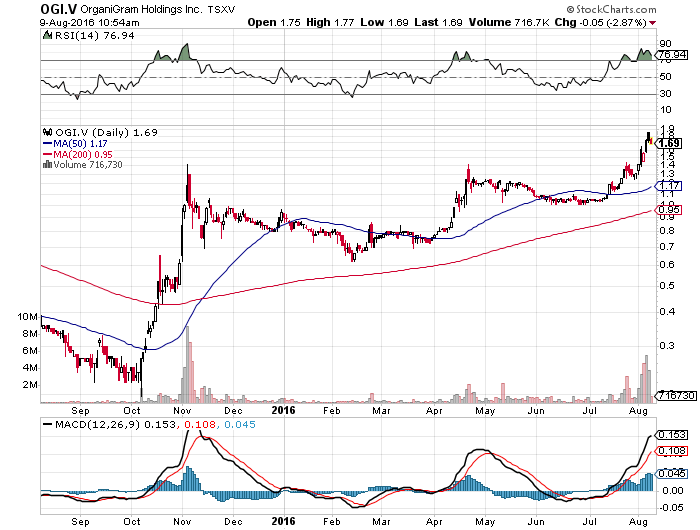 Of course, Theresa doesn’t only invest in cannabis stocks. She also invests in the industry organizations that work tirelessly to ensure that we have the opportunity to profit from this market.

Without legalization, these companies don’t exist. It’s that simple.

Hell, just a few weeks ago we learned that the Carol Jenkins Barnett Family Trust donated $800,000 to a lobbying group trying to stop legalization efforts in Florida.

Then there’s Mel Sembler. The very successful real estate mogul who’s been very vocal about raising $10 million to fight Florida’s legalization efforts. Ironically, Sembler used to run a drug treatment center that was eventually closed down after it was found that his center, which was called Straight, Inc., had been abusing a lot of kids.

Rest assured, dear reader, there are plenty of folks who want nothing more than to keep prohibition alive and well. So those who invest, make a living, or seek to make a living in the cannabis space would be wise to support the organizations that are making legalization possible.

Time is Running Out!

According to a recent online poll conducted by the good folks over at Marijuana Business Daily, about 20 percent of executives in the cannabis space said their companies don’t plan to donate to legalization efforts this year.

This is nothing shy of irresponsible. By not supporting legalization efforts these companies are putting their shareholders at risk.

It should also be noted that 17% of executives who took the poll said they hadn’t yet made donations, but were planning to in the future. What they’re waiting for, I have no idea.

We’re three months away from Election Day. This is no time to dick around.

Here are a few of the groups that are fighting the good fight: