About a month ago, a friend of mine was jewelry shopping for a Christmas gift.

She wanted to buy a gold locket for her daughter, but went into price shock at the Macy's counter...

It seemed the piece she was looking at had doubled in price from the last time she was browsing.

She decided to go with “white gold” — or platinum — instead.

As an investor, I always keep an ear to the ground when it comes to the shopping stories of the fairer sex. Many a dollar has been made on booming ten-baggers such as Pokémon, Crocs, and Jimmy Choo.

I was reminded of my friend's anecdote when I came across a story in the Business Standard of India...

Jewelry makers in Gujarat are selling a lot more platinum-based jewelry than they have in the past.

This is backed by the fact that gold imports to India in the last quarter fell by 52% to 125 metric tons.

The article went on to say:

With gold prices rising, jewellery makers' business would rise too, but on the value front, while number of units sold may not rise. White gold or platinum is the new craze among the domestic consumers. Hence there is increasing focus for platinum jewellery in the new year.

The Wall Street Journal backs this trend, reporting: “India's gold imports have crashed to around 20 metric tons in November from 75-80 tons a year earlier, and demand during December is also expected to be weak unless prices come down.”

Indian mothers have recycled their old gold for the November/December wedding season... or have turned to platinum.

The Bullish Case for Platinum

Platinum is rarer than gold, but due to the fact that it can withstand high temperatures and it is resistant to corrosion, it is useful in industry.

The largest (40%) and most obvious use of the heavy metal is for catalytic converters in automobiles.

Due to the Japanese tsunami and subsequent auto production drop, the price of platinum has crashed from $1,900 per ounce to $1,400.

This chart shows the spread between gold and platinum: 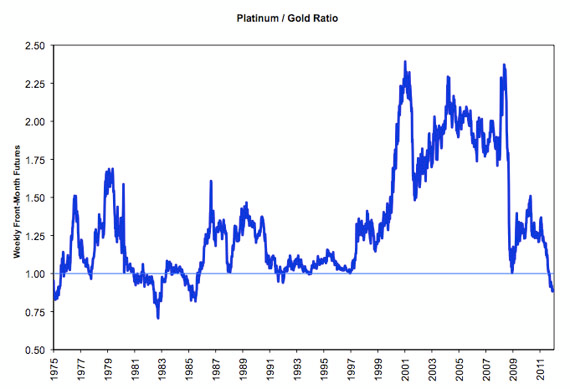 Platinum has fallen below the 1:1 historical average — and well below the 1:1.75 average it held in the past decade. It now trades at less than 1.

Here is how gold versus platinum ETFs have performed over the past year: 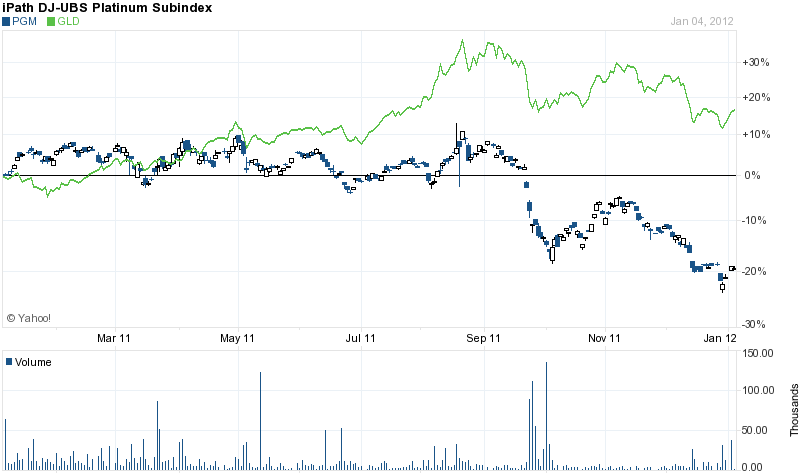 Couple increased jewelry sales with the idea that Japan will be back in the auto business, and you have a bullish demand scenario.

Morgan Stanley estimates “about 3.82 million ounces of platinum will go into auto catalysts, 17 percent more than this year and the most since 2007.”

The Supply Side: South Africa

South Africa produces around 75% of the world's platinum.

The country's mines are getting hit with growing electricity costs and deteriorating margins. Mining expenses were up 30% in 2011.

Research from Barclays Capital noted on December 3, 2011: “at levels of about $1,530 an ounce, platinum is trading close to or below the price at which some miners break even and that high-cost producers are already losing money.”

Costs for Anglo American Platinum (AMS) are running at $1,567 an ounce.

The crash in platinum from $1,900 an ounce in August to $1,410 per ounce has created a bearish psychology.

This in turn will lead South African mines to cut unprofitable production.

If you add into this scenario the idea that the global economies will rebound and car sales will increase, it would be a solid bet to buy the physical metal.

Just stay away from the miners...