When this Train Arrives, It'll Run Us Over

It's scary because it's true...

We're dead. We just don't know it yet.

Our elected officials have spent and promised us into oblivion and there is no turning back.

Yet numb to our fate, we stagger around like those poor, hopeless souls in Night of the Living Dead, shuffling off to the zombie mall with our zombie paychecks in hand.

This, my friends, is the life we have created for ourselves as we lounge around our zombie homes... owned by so many zombie banks... But those granite counter tops and stainless steel appliances sure are awesome, aren't they?

And while I hate to be the bearer of bad news, this is only the second act of this scary story. Headed down the pike is yet another fiscal crisis.

You see, the tumult in Greece these days is really nothing compared to what is happening on our home turf.

Overwhelmed by figures that will never add up, zombie state governments are the next fiscal wave about to wash over the markets.

And while this may be news to most Americans, the brewing municipal pension crisis is about to take another bite out of their pitifully equipped wallets.

State and local governments have racked up so much debt funding generous benefit plans that a nationwide pension crisis is inevitable — along with big tax increases to help close the budget gaps.

For taxpayers, this means looking forward to dramatically fewer services while, at the same time, being asked to pay more.

Even still, numerous state and local governments will undoubtedly go belly-up in the process without another federal bailout.

In fact, without last year's stimulus rescue, these municipal defaults would have already happened. Unlike their Uncle Sam, these governments just can't simply print their way out of trouble.

Maybe that's why famed short-seller James Chanos has added municipal bonds to his list of investments to avoid... As Chanos would argue, they are not as safe as advertised.

In the meantime, the municipal bond market is starting to wobble as local governments begin to feel the pinch of caviar dreams on a bologna budget.

Take Illinois, for instance. Its $130 billion in public debt has become practically untenable thanks in no small part to the largess of public sector pensions. Accordingly, that has put the state on the brink. As the website IllinoisIsBroke.com reports:

Imagine — that's just to make the interest payments. The fact is even at those criminal tax rates, the underlying debt would never be addressed.

And then there is the Golden State. As you might have guessed, it's not so golden... California is already $6 billion behind what it needs to fund basic programs this year; the state is projected to be short by another $14 billion in the next fiscal year, starting July 1.

That is from a state that furloughed workers, froze spending on public works projects, and issued IOUs to pay its bills last year. This cycle will undoubtedly be much worse.

The unfortunate part is that Illinois and California are just the canaries in the coal mine. As you can see from this graphic, it's a nationwide wide problem that doesn't exactly paint a pretty picture: 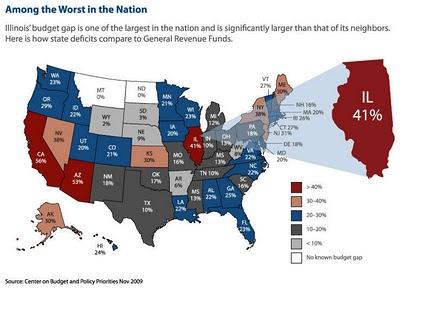 As a result, the States are now looking at a total budget gap of $180 billion for fiscal 2011, on top of a $170 billion deficit this year. That is roughly a $350 budget hole that can only be filled by a combination of taxes, spending cuts, and Uncle Sam.

And that is strictly based upon the idea that the economy will grow from here. If not these numbers will only get larger. According to Moody's chief economist, Mark Zandi, government spending cuts to close these gaps will lead to the direct loss of some 900,000 jobs.

So how did we get into this dire situation?

It's pretty simple, actually. We live beyond our means and have made promises to public sector unions that we cannot meet — just as General Motors did, but on a grander scale. And we all know how things ended for GM...

In that regard, here's how newly-elected New Jersey Governor Chris Christie described the problem in his first State of the State Address. Speaking about the unfolding pension crisis, Christie said:

A retired teacher paid $62,000 towards her pension and nothing, yes nothing, for full family medical, dental and vision coverage over her entire career. What will we pay her? $1.4 million in pension benefits and another $215,000 in health care benefit premiums over her lifetime. Is it "fair" for all of us and our children to have to pay for this excess?

The total unfunded pension and medical benefit costs are $90 billion. We would have to pay $7 billion per year to make them current. We don't have that money, you know it and I know it. What has been done to our citizens by offering a pension system we cannot afford and health benefits that are 41 percent more expensive than the average Fortune 500 company's costs is the truly unfair part of this equation.

All so a new privileged class can retire early with benefit packages that are on par with a lottery jackpot. Who knew these folks were paid so well? ... Certainly not most people.

Now don't get me wrong: I don't think is necessarily fair to place a huge target on the backs of these folks and fire away. After all, a deal is a deal — even if it's a bad one.

In that same vein, I agree with what Governor Arnold Schwarzenegger had to say about this mess. Regarding California's growing public employee pension crisis, Schwarzenegger said:

The cost for state employee pensions is up 2,000 percent in the last ten years, while revenues have only increased by 24 percent. The pension fund will not have enough money to cover this amount, so the state — that means the taxpayer — has to come up with the money. This is money that is taken away from important government services.
This is money that cannot go to our universities, our parks and other government functions. Now, for current employees these pensions cannot be changed — either legally or morally. We cannot break the promises we already made. It is a done deal. But we are about to get run over by a locomotive. We can see the light coming at us.

So what's done is done, and there is not much that we can do about it — except work until we are 80 to help fund cruises for folks that retired at 55.

But rest assured that when this train finally arrives, it really will run us over — just like Greece, but much closer to home.

Because standing behind all of this mess is biggest black hole of them all: your Uncle Sam, sort of like a half-assed zombie king... But that's a hair-raising tale I'll save for another day.

Until then what you need to realize is this: The status quo can not possibly be maintained.

In fact, it's fading faster than you think.

P.S. If you are not content to lie down on the tracks and wait for this train to run you over, now is the time to plan for a better tomorrow with a subscription to The Wealth Advisory. My team has discovered an unknown biotech play that may not only save millions of lives... but could also see some serious profits along the way. To learn more about this ground-breaking company, click here.