3 Tools You Can Use to Easily Spot Stock Trends

But I'm here to tell you that both couldn't be easier.

With just three simple steps, you can master the art of technical trading in no time at all.

In fact, in addition to thematic trading, Options Trading Pit uses these tools more often than not — despite market direction.

It was June 2009 when we watched Tiffany & Company (TIF) briefly spike from an oversold $25 to more than $30 — in spite of being knee-deep during the recession.

Those who went long with the underlying stock walked with max gains of 25%.

But here's something else you may not know: profiting from technical developments has never been easier.

While there are many ways to screen for opportunities, four of my favorites involve the use of Bollinger Bands, W%R, the news, and candlesticks.

By using these four things, we can call for tops and bottoms on indices as well as individual stocks.

In late November 2006, shares of AIG were grossly overbought.

Technically, once we got word of extremely overbought W%R read (as seen in mid-November), we knew AIG was overdue for a correction. Also notice that at the time, the underlying stock crossed above the upper Bollinger Band with a doji cross, indicating near-term reversal, which we got.

We bought again at the bottom, marked by an oversold W%R and rode it back from about $69.50 to more than $72 in a few short weeks.

For those of you who aren't familiar with the terms (doji, Bollinger Band and W%R), check this out:

Reverse everything you just learned and you can play bottoms, too.

Here's how we found this:

Okay, but what's a doji?

The profit stars, more commonly known as dojis, are commanding reversal signals. These are formed when the candlestick opens and closes at the same level, implying indecision in the stock price. 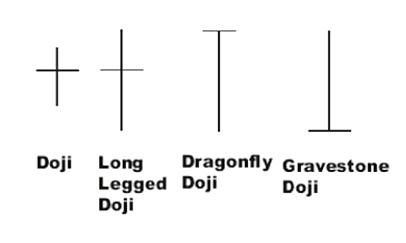 Depending on the location and length of the shadows, dojis can be categorized into four subcategories:

This candlestick looks like a cross, inverted cross, or plus sign. At the top of a trend, it can indicate that a reversal is near.

The bearish dragonfly doji can usually be found at the market top or during an uptrend. This candlestick tells us the bulls may be losing their way and casts doubt on the market's ability to continue north. Confirmation is essential. You can confirm with a gap down or a lower close on the following day.

Gravestones are the opposite of dragonflies and indicate top reversals when confirmed with a bearish engulfing scenario (which we also use). These dojis look like gravestones and can signal the death of a stock.

For our purposes, let's make this a bit simpler.

We're not going to get into the scientific structures and Bollinger band calculations with each trade. We'd be here until New Year's 2012 doing that.

The third component of the trade is to find an overvalued W%R read, or a chart where the W%R has peaked. According to the W%R, values of 80% to 100% indicate an oversold condition. Values of 0% to 20% are overbought.

Interesting to note: W%R has the ability to anticipate reversals. The indicator will oftentimes peak and turn down days before the stock peaks and turns down. It does the opposite with upside.

If you're interested in trading options, print this article. Reference it often.

These are some of the easiest and most important technical indicators out there. Master them, and you can call tops and bottoms with ease.

They're what we use in Options Trading Pit, along with thematic trading. And we've been banking some impressive gains along the way.