Six Stocks for the Corn Boom

Today's financial market is a fight between inflation and deflation.

On the inflation side, you have the Federal Reserve and central bank of every major country printing money.

The Fed balance sheet in the United States is now over $3 trillion.

In China, they pumped out more than $1 trillion last year; Japan is printing money full bore.

In Europe, the lackluster idea of austerity hasn't proven out, as bailout after bailout leaves creates an endless series of failures for the Eurozone.

All this money printing is creating distortions in the markets, yet the velocity of money continues to drop.

Brazil, Russia, India, and the rest of the emerging markets continue to fall as the great commodity supercycle winds down...

In a world of corruption and central planning, it is good to know that, like truth, free market forces will find a way.

Yesterday, we had news that the world's largest fertilizer trust has been broken up. The OPEC of potash got crushed.

OAO Uralkali (URKA), the world’s largest potash producer, upended the $20 billion-a-year industry by abandoning limits on production that underpinned prices and halting cooperation with Belarus that controlled supplies from the former Soviet Union.

The decision sent shares of potash producers plunging as much as 27% from Israel to Germany to Canada and the U.S. as investors speculated a flood of supplies will lead to lower prices for potash, a soil nutrient that strengthens plant roots.

“Uralkali’s announcement completely turns the global potash market upside down,” Elena Sakhnova, a VTB Capital analyst in Moscow, said by phone. “If previously global potash producers were acting like an oligopoly, working with the rule that benefited higher potash prices over shipped volumes, now the market will be fully competitive.”

Uralkali’s venture and a group comprising Potash Corp. (POT) of Saskatchewan Inc., Mosaic Co. and Agrium Inc. (AGU) played off each other, moderating output and exports along with demand to prevent price swings.

The end of this price-fixing scam means that potash prices will drop by as much as 25%. This means the price of agriculture commodities such as corn and wheat will fall.

As Corny as Kansas

If you've driven through the Corn Belt recently, you know the corn crop is looking at a record harvest.

The U.S. Department of Agriculture has backed this drive by prognosis: This fall's corn crop is projected to total 13.95 billion bushels, which would break the previous record of 13.1 billion set in 2009.

If realized, this forecast will mark a dramatic jump of 29% from last year's drought-stricken harvest of 10.78 billion bushels, the country's smallest since 2006.

Corn is also having a banner year in India, Brazil, and Argentina.

In the Ukraine, crop production is expected to be up 24%.

Needless to say, corn prices have fallen below $4.75 to a 33-month low and are trending down. 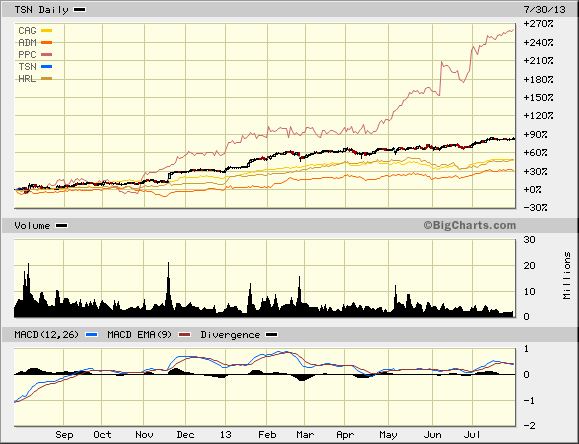 Obviously, companies that have corn as a major input cost will benefit...

Tyson Foods is the big winner and market leader.

All of these stocks have been beating the market and hitting 52-week highs.