Only Buy This on Pullbacks...

But once these "bubble" guys account for further dollar debasement with a clueless Fed and hyperinflationary risks, they'll realize "the poor man's gold" is the place to be in the long term.

Short term, though, I'd wait for the pullback before backing up the truck.

Silver looks a bit frothy at historical resistance with overbought stochastics and Williams % Range reads. And it's well above its 200-day moving average.

I do believe that if silver can break $31.50 on pullbacks, it can take out $35... and eventually $50 on backwardation, which I'll explain in a minute. 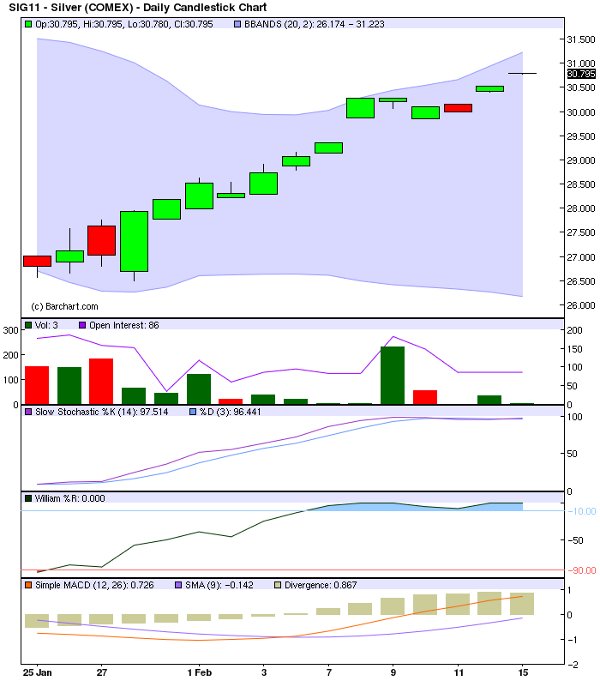 Sure, silver has rebounded nicely off recent lows. But the odds of a sustained breakout aren't looking so hot...

Supply is tight and there are manipulative forces. There's even backwardation.

But with silver failing to reach new highs, silver stocks look a bit petered out. And those hoping to see a break to $40 — even $50 — may be sorely disappointed.

Realistically, I'm not betting much on silver's near-term upside. Longer term, I think we could see a real chance of running to $35.

But my advice is to wait for the pullbacks.

Just what is backwardation?

Rarely seen silver backwardation tells us the silver market can't keep up with the level of international and retail investor demand. It indicates the fact that buyers are so concerned about future supplies, they're willing to pay a higher premium.

And it'll continue as:

With the United States running quadrillion-dollar deficits and the Fed adding zeros to the Treasury's back accounts, it just makes sense to move into gold and silver.

Chinese demand for silver is outrageous. The Industrial and Commercial Bank of China (ICBC) sold 13 tons of physical silver in January 2011 alone. Compare that to the 33 tons sold in all of 2010...

Taking all of that into consideration, there's no reason to believe silver will not be a great long-term investment on pullbacks. Which means existing silver supplies are being overwhelmed.

It also means stocks like Silver Wheaton (SLW) and the Silver ETF (SLV) have room to run after pullbacks. 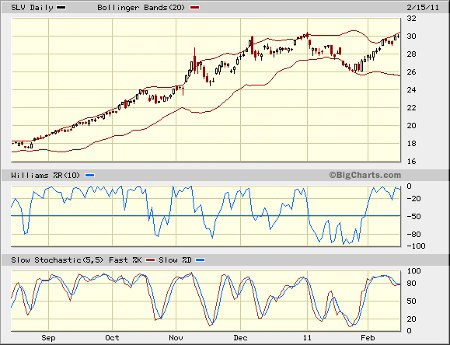 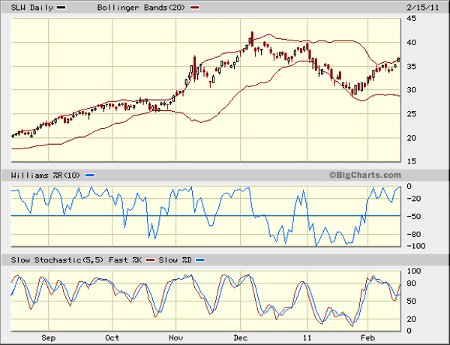 Fifty-dollar silver isn't out of the question if Bernanke turns on the printing presses and/or backwardation continues...

Even the founder of Sprott Asset Management Eric Sprott, who just launched the $575 million Sprott Physical Silver Trust, will tell you it can run to $50.

GoldMoney's James Turk sees "a huge story that is brewing... Silver is in backwardation to 2015, which is 13 cents cheaper than spot.  This is unbelievable. Money does not go into backwardation except in extremis!"

Without a doubt, I would load up on silver — but only on short-lived pullbacks, as the silver space becomes a tad too overbought right now.

I'd buy the Silver ETF (SLV), Silver Wheaton (SLW) and anything else with the word silver in it.