Charge Your Phone with your Shoe!

We've all heard about harnessing energy from the sun and wind, but what about from your own two feet? 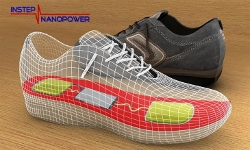 Instep Nanopower has created an in-shoe charging system that will allow users to power their mobile devices through the power of movement.

The technology was developed by two engineering researchers at the University of Wisconsin. It can be placed in the sole of a shoe and converts movement from liquid metal into an electrical current.

The process of conversion is known as reverse electrowetting. As your feet strike the soles of your shoe, small micro-droplets interact with a nano-structured substrate (dielectric films) to create up to 20 watts of electricity.

The converted energy is stored in a hermetically sealed battery in order to protect against elements such as water and dirt. The battery can be taken out and used to charge a mobile device.

The device could also serve as a self-charging mobile hot-spot. This would indirectly lengthen the battery life of mobile devices by allowing them to use a low-power standard such as Bluetooth to connect to the internet.

But Instep Nanopower isn't the first to create electricity from shoes: Dr. Ville Kaajakari developed a piezoelectric generator small enough to sit in the sole of a shoe in 2010.

Now, if you're thinking there can't possibly be that large of a market for phone charging shoes, I'd be prone to agree. The product would only really be useful to hikers and campers – just about everyone else has outlets readily available on a consistent basis.

Additionally, companies like Anker, New Trent, Motorola(NASDAQ: MSI), and Energizer (NYSE: ENR) are already making portable phone chargers that offer far greater power capacities. I'm also pretty sure that a battery sitting below the arch of your foot wouldn't add too much of a comfort factor.

While I don't really expect the shoe charging station to ever take off, the technology behind it is actually quite promising for alternative applications.

Piezoelectricity means electricity resulting from stress or pressure. Natural and synthetic solids such as Berlinite and Quartz exhibit piezoelectric qualities when experiencing mechanical pressure. This electricity can be captured by sensors which then store the charge in a power source.

Applications of harnessing piezoelectricity range from keyboards to dance floors to roadways.

Piezoelectric floors have already been installed in a few dance clubs including Club Surya in London. These floors represent the first practical use for what is referred to as 'crowd farming'. Piezoelectric energy gathered at a dance club can provide approximately 60 percent of a venue's total energy requirements.

Piezoelectricity also has the potential to allow laptops or tablets to operate without having to connect to a power source. We constantly exert pressure and stress on our electronic devices through keyboards and touch screens which allows for the potential of piezoelectric conversion.

Even the roads we drive on are subject to piezoelectricity. Israel is already harnessing the power of pressure based energy using technology developed by Innowattech Energy Harvesting Systems. One kilometer of the four lane highway can generate enough power for an estimated 2,500 homes per year.

California Assemblyman Mike Gatto proposed the development of a piezoelectric roadway in 2011. The proposal was initially vetoed due to a lack of funding. However, funding for preliminary testing was acquired from the California Energy Commission (CEC) in 2012.

In 2013 The CEC released a report assessing piezoelectric materials for roadway energy harvesting and called for an initial demonstration project that will be used to determine the cost-effectiveness of large-scale applications.

If piezoelectricity does prove to be a viable source of energy, investment opportunities will arise in both piezoelectric installation and material companies alike.

One company worth looking at is ITT Exelis (NYSE: XLS). Exelis is the largest U.S. developer of piezoelectric ceramic-based products and has been for half a century.

Innowattech is the top contender for receiving a contract from the CEC and is recognized in the commission's report as such. If Innowattech comes to the U.S. from Israel, it is going to need a local supplier of piezoelectric ceramics and Exelis is a top candidate.

However, Exelis also offers a wide range of products including military defense services and counter-intelligence applications. CTS Electronic Components Inc. (NYSE: CTS) is far closer to a piezoelectricity pure-play. The company manufactures a varity of piezoelectric elements, the most important being transducers, actuators, and sensors – all of which are used in energy conversion.

Exelis and CTS are currently trading near all-time highs with respective gains of 22 percent and 33 percent within the past twelve months.