Select Stocks Set to Take Off

The Best Investments Weather Any Storm

Maybe you’re tired of hearing me talk about cannabis investments. Maybe you’re just weary of them after watching the market correct so hard during October.

I really don’t know the reason my article on the top three cannabis stocks to buy didn’t catch your attention.

But I’m going to give it another shot today. And that’s because now is the best opportunity you’ve had in months to start investing in an industry that’s going to be worth BILLIONS in the U.S. alone.

It’s times like these, when an industry has taken a beating, that you should be looking for investments that are going to weather the storm.

When the internet bubble burst in 2000, companies like Cisco, Amazon, and Qualcomm were selling for a fraction of their real worth.

And investors who saw the intrinsic value and stuck with them through the correction made millions. Folks who added shares or started positions during the collapse had the potential to net billions.

But most of the retail investing world was too scared to invest in companies involved with the internet. Even the absolute best ones. So, most of us missed out on the kind of profits that come around once or twice in a lifetime...

It’s the chaos born from frantic selling that creates the opportunities to find ten-bagger investments getting thrown out with the trash.

And that’s the kind of opportunity we’re getting right now in the cannabis industry.

When the Levy Bubble Breaks

There’s no doubt that cannabis stocks got into bubble territory this year.

2018 truly has been the year of marijuana investments. The biggest gains we’ve seen have come from that sector. But now, some of the biggest losses have, too.

Mass speculation on future investments started driving shares through the roof. Canopy got another infusion of cash from Constellation. And then Diageo started courting companies, too.

Rumors started swirling that other massive names were looking to invest in the space. And more rumors swirled about which company they’d buy into.

Shares in the few U.S.-listed operations started to run. And then the commentators on CNBC and Fox Business started talking about the amazing action going on in cannabis.

That was the tipping point. Once all everyone was hearing about on the news was pot stock profits, no one could get in on the action quick enough.

And it sent share prices soaring. Everyone was frantic to get involved. FOMO (Fear Of Missing Out) was driving cannabis stocks to ridiculous levels.

It all started earlier this year, but it came to a head in September. That’s when the charts really went vertical.

But then, almost as soon as the frenzied buying had started, the euphoria wore off and reality set in.

You see, when I say the prices got to ridiculous levels, I’m being nice. The prices people were paying for some of these stocks were downright silly.

It got so bad that I started advising the readers of my investment service, The Wealth Advisory, that they should hold off on adding any more of the investments we have in the sector.

Things just couldn’t last. There were way too many red flags popping up...

The biggest one was also the company that got the most press coverage: Tilray Inc.

Tilray IPO’d this summer around $17 a share. At the height of the buying, it was trading around $300.

But the value just wasn’t there to support such a lofty price. I’m not saying Tilray is worthless. I’m just saying it’s not worth that much.

Over the past year, Tilray managed to grow revenues by around 94%. But its stock value grew by 856% in that same time.

Tilray brought in a little over $20 million in revenues in 2017. But at the height of the bubble, the company was valued at nearly $20 billion.

People were paying nearly $1,000 per dollar of sales the company has. That’s just plain crazy!

But Tilray wasn’t alone in the speculation-fueled feeding frenzy. Other growers got caught up in the mix, too. Of course, there was Canopy, the target of Constellation’s investment and the fuse that lit the fire.

But other lesser-known names started making their way into the headlines...

Canadian grower Aurora Cannabis saw its share price balloon nearly 400% over the past year. Never mind that its revenues only increased by about 130% in the same time.

And investors were willing to pay ridiculous sums for its earnings, too. Now, they got a slightly better deal, since Aurora makes about twice as much as Tilray.

But they were still paying $200 for every $1 the company makes in sales. Again, that just screams, “Bad move!”

Another U.S.-listed company that speculators bid up and careless investors pumped even farther was Cronos Group. It’s another Canadian cannabis company.

And it’s got intrinsic value just like Tilray and Aurora do. But the prices people were paying for that value just didn’t make any sense...

Last year, Cronos brought in about $4 million in revenues. But the company’s market cap hit $2.4 billion during the bubble. That works out to $600 for each dollar the company brings in.

And those revenues only grew 42% over the past 12 months. So, it just doesn’t compute that the share price should go up 444% in the same time.

But others got caught up in the irrational exhilaration of a runaway market and lost big as all three plummeted throughout October. 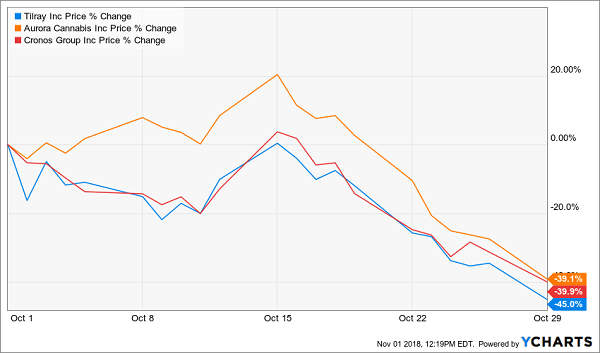 But now, as I type, all three of those companies are seeing their stocks swing back up. And why is that?

It’s because there is intrinsic value in all three of them.

And now that prices aren’t so overinflated, smart investors are coming back in to size up the market. And they’re picking out the future Ciscos, Amazons, and Qualcomms of this budding industry. 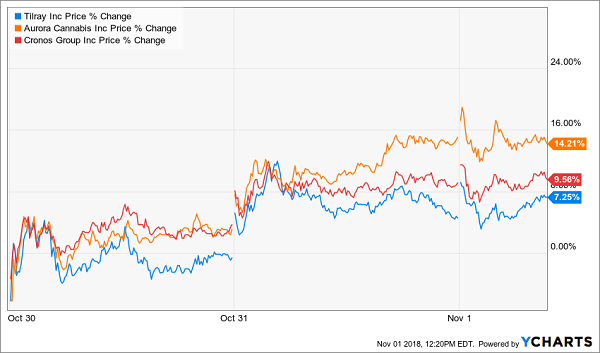 That’s why I’m writing to you today. Because I want you to be part of the smart money. And I want you to take advantage of this opportunity that may never come around again.

I don’t want you to miss out on all the profits to be had like so many did after the dot-com bubble burst.

I want to help you find the companies that have real value. I’ve already given you several. All three I talked about today have the potential to grow to massive sizes with the industry.

And last week, I gave you three others that had been hit hard but will likely weather the storm and come out on top.

Today, I’m going to give you another chance to get in on the investment that’s been growing my readers’ accounts for nearly a year.

It’s the safest cannabis investment out there. In fact, it’s so strong that it’s cushioning our other cannabis plays as well.

You see, a special deal this company has with the U.S. government — a deal that allows it to operate as the kind of interstate cannabis company it is — requires it to pay nearly all of the money it brings in from cannabis operations to shareholders.

I’m not even kidding. If this company wants to exist, it must pay at least 90% of its profits to investors.

It’s a little-known law that allows the company to operate in multiple states even though cannabis is still a federally banned substance.

And it’s an amazingly profitable investment if you know about it — which very few do.

In fact, while the cannabis sector was getting thrashed, my readers split a massive payday thanks to this company. They collected their share of a $3.4 million cash payout.

That was about halfway through October. Other cannabis investors were watching their investments get cut in half. We were counting our profits.

And as the cannabis industry keeps growing, so do the payments we keep collecting. They’ve already increased by 133% in the past year. And they’re destined to get bigger with every passing month.

Right now, we’re collecting $13.7 million per year. But remember, this company can’t keep operating unless it shells out at least 90% of its profits to us.

So, as those profits grow, so do our payments. And as the industry grows, those profits are all but guaranteed to grow right along with it.

I’ve taken to calling the payments “reefer royalties” because it’s almost like we’re getting paid every time someone lights up a joint.

But joking aside, this is one of my top overall investments. And it’s the only cannabis stock I’ll hold in my own retirement fund.

“The Only Pot Stock I’ll Ever Own”

I’m not the only one sharing that sentiment...

I share a lot of my investment ideas with the founder of our company (and everybody's boss), Brian Hicks.

Brian’s a tenured veteran in the world of finance. He’s built himself a very nice portfolio thanks to his immersion in the markets, too.

So, when he gets excited about one of my investments, I know I’ve really hit on a great one.

And Brian was so excited about this one (and made so much money off his initial purchase) that he insisted I let him share it with the world.

He called it “the only pot stock [he’ll] ever own.” And from what I can tell, he’s pretty happy he listened to me... 150% and three “reefer royalty” payments later.

So, now that the market’s given you a chance to invest in a brand-new industry at more reasonable prices, take my advice, take Brian’s advice, and get yourself invested.

Now is the best time to buy. When others are fearful, be bold. Those are the ones that fortune favors.