See an Exploding Torpedo Dropped in an Oil Well

The Most Important Patent in American History

It has the unglamorous and nondescript title of U.S. Patent No. 59,936.

It was issued over 146 years ago in November 1866 to Civil War veteran Col. Edward Roberts.

And it might be one of the most valuable patents ever awarded to an American.

It's so important to America that Citigroup reported last week: "In the next 8 years, it could create trillions of the dollars in wealth… put 3.2 million Americans back to work... and catapult the United States back as the greatest economic powerhouse the world has ever seen."

In fact, nations like China, India, Ireland, Poland, and Argentina are begging to use U.S. Patent No. 59, 936 — because they know it holds the key to untapped fortunes and national prosperity.

Its creation began when he witnessed Confederate exploding artillery rounds plunging into the narrow millrace (canal) that obstructed a battlefield in Fredericksburg, Virginia. Roberts' observation gave him an idea that would evolve into what he described as "superincumbent fluid tamping."

Nobody knew it at the time, but Roberts' "Exploding Torpedo" was the birth of the modern-day shale fracturing industry.

The Titusville Morning Herald reported in 1866:

Our attention has been called to a series of experiments that have been made in the wells of various localities by Col. Roberts, with his newly patented torpedo. The results have in many cases been astonishing.

The torpedo, which is an iron case, containing an amount of powder varying from fifteen to twenty pounds, is lowered into the well, down to the spot, as near as can be ascertained, where it is necessary to explode it.

It is then exploded by means of a cap on the torpedo, connected with the top of the shell by a wire.

The technique was immediately successful.

Production from some wells increased 1,200% within a week of being shot — and the Roberts Petroleum Torpedo Company experienced booming business as a result.

"Exploding shot" would be used in oil wells for decades to come...

The next evolution of the Roberts' invention came on March 17, 1949, in Duncan, Oklahoma, where the first hydraulic fracturing occurred.

But it wasn't until the 1980s and 1990s when George Mitchell, known now as the "father of shale gas," applied horizontal fracturing to the prolific Barnett Shale in Texas that the modern-day shale revolution was born.

Thanks to Mitchell, every shale formation in the United States is now open for business.

And that has some energy experts predicting America will be the #1 global energy producer by 2020.

That was the title of a report published by Citigroup last week.

The basic thesis of the report is that horizontal and hydraulic fracturing of shale formations in the Bakken, Eagle Ford, Utica, and Marcellus, etc., has unleashed an ocean of oil, dry and wet natural gas:

Production from these [shale oil and gas] is rising so fast that total U.S. oil production is surging, even as conventional oil production in Alaska and California is continuing their structural decline...

The rise is shale oil production is already materially impacting the oil markets as rising production out of the Bakken and Eagle Ford and other plays are key drivers for WTI’s disconnect from Brent and the rest of the global crude complex...

Citigroup is so optimistic, in fact, they believe the U.S. will eventually overtake Saudi Arabia and Russia.

The United States was the largest oil producer in the world, achieving that rank when Russian production collapsed at the start of the Russian Revolution and holding on to it until the 1970s, when U.S. oil production peaked at 11.3 million barrels per day.

Since then, it had been declining consistently to a low of 6.8 million bpd in 2007, counting both oil and natural gas liquids (NGL).

But it was in 2007 that we saw the turning point — with current trends pointing to U.S. supply overtaking Saudi Arabia and Russia... 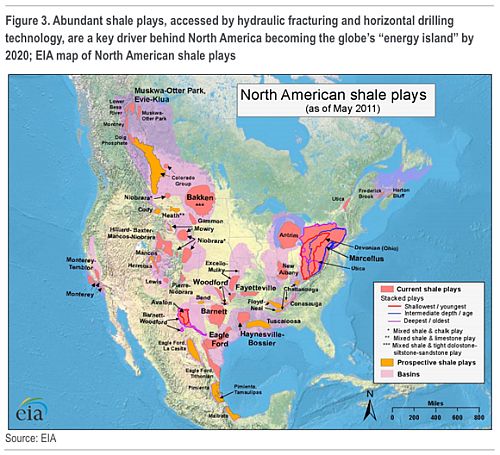 According to the Citigroup report:

But I’ve learned to never underestimate American ingenuity and determination.

And if the United States gets to 27 million bpd, or just close to it, the wealth it’ll create for our nation will be a game-changer.

In fact, it's a black swan event. Nobody — with the exception of Wealth Daily and Energy & Capital — saw the tectonic shift coming from shale oil and shale gas. We were ahead of the curve, buying Bakken stocks before anybody knew what the Bakken was.

The oil and gas stocks we recommend will continue to be the high-fliers in the stock market.

So is Peak Oil dead?

Globally, no. OPEC is in a state of decline. So is Mexico, and perhaps even Russia.

The world has to produce more and more oil just to offset current decline rates. It's as if we're running on a treadmill: No matter how fast we run, we're not moving forward.

However, the United States is in a very special place in a unique moment in history. We may likely become the "energy island" to the globe; its salvation.

And, dear reader, the revolution has come full circle — back to where it all started...

On March 13 of this year, the Titusville Herald reported:

Titusville, “the birthplace of the oil industry,” went into an economic decline after the steel industry, primarily Universal Cyclops, was bought out, chopped up and sold, leaving the city, for years, with a sprawling graveyard of steel mill skeletons.

Generations of families have been raised in a culture where the greatest opportunities seem to lie beyond the valley.

But now, with evolving technologies and techniques for the extraction of gas that has been trapped in a layer of rock, called the Utica Shale formation — which lies beneath the Marcellus Shale and stretches across the state and into lower Canada — opportunity appears to be, once again, knocking on Titusville’s front door.

It's going to be a fantastic and very profitable ride.