Hopefully, I’m preaching to the choir today. But in case you’re not a convert, I believe you'll be one after you read this article.

And I’m talking about it because the No.1 question my family and friends asked me this holiday season (other than “Should I buy Bitcoin?”) was what stocks to buy in their new Robinhood accounts.

My answer: “None unless you’ve already topped off your Roth IRA.”

And that’s the same thing I’ve got to say to you. If you’re putting money into a Robinhood account this year and you haven’t already maxed out your Roth IRA contributions, I’m not really sure what you’re doing reading Wealth Daily.

It may have a kind of silly name, but a Roth IRA should be every investor’s best friend. It’s a special retirement account that most people are eligible to open.

Let me say that again: YOU DON’T PAY TAXES ON YOUR GAINS!!

Sorry to yell, but if there’s an account out there where you can have your money grow for years and never pay a dime of taxes on it, WHY ARE YOU USING ANYTHING ELSE?

My guess is that you just don’t know about the Roth IRA option, or at least that’s my hope. Because if you know about it and you’re not taking advantage of it, I’ve got to believe you just hate money.

Now, not everyone is eligible for a Roth. You have to make under a certain amount to qualify. But the income maximum is pretty high, so most of you should fit right in.

So a lot of you probably qualify whether you know it or not.

But a Roth is not without its risks...

A Price for Everything

You see, a Roth IRA, like any other retirement account, has restrictions on when you can start accessing the money you’ve saved.

If you make any withdrawals from your IRA before you’re 59 ½, you’ll have to pay a 10% early-distribution fee.

But once you hit 60, you can start accessing the money and cashing out your tax-free profits.

And if you don’t need the money, you don’t actually have to withdraw anything until after the owner of the account passes.

So unlike a 401(k) or a traditional IRA or a SEP, you don’t have to take money out when you hit a certain age unless you want to.

Your retirement accounts and your savings are so that you’ll have income after you stop getting a paycheck, not before then.

And the forced long-term holding period makes you accept the benefits of compound growth — you know, the eighth wonder of the world (allegedly according to Einstein).

You see, the strongest force you’ve got working for you in the stock market is time. With time, pretty much all stocks will grow. And with time, you can easily turn a few thousand dollars into a few hundred thousand dollars.

Here’s an example from the past 10 years, using two big-name stocks you all knew about back in 2010, to really drive my point home.

And I’m using small investment sizes to really show that anybody can make money in the market given the right amount of time.

That’s a 682% gain! And it’s not like anyone didn’t know what Microsoft was in 2010. It wasn’t a secret stock you had to be in the know to hear about.

Or what about Apple? Nobody didn’t know about Apple in 2010. It wasn’t a secret that it was dominating the smartphone world.

Again, you only invested $2,000 of your money, and yet you’ve got enough to buy a car by the end of the decade.

No secret strategy. No day-trading. Just holding a quality company for 10 years and you’ve got yourself a 1,269% gain.

Now, let’s think about the taxes you’d pay on those gains if you were holding them in a Robinhood account and not a Roth IRA...

Because Uncle Sam worked very hard to make those stocks go up, he’s going to take a cut of those profits if you’re not making them in a Roth account.

And the cut can be pretty deep. Those examples are all long-term positions, so we’ll look at those capital gains taxes to see how much we’d keep and how much we’d give up.

Depending on your taxable income and filing status, those taxes run as high as 20% of your profits.

You’d pay more than you even invested in taxes if you had those in a Robinhood account. You’d keep 83% of the final account value while the government got 17%.

With Apple, it would have been even worse. You’d owe Uncle Sam $5,076.60. That’s more than two and a half times the amount you invested to start with!

So you’d get to keep about 81% of your final account value, and Uncle Sam would walk with your other 19%.

But if you’d had those investments in a Roth IRA, you’d have kept 100% of the profits, and 100% of the final account value would be yours.

I don’t have to tell you that when you boost those investment numbers, the profits get boosted too. But I will...

But I’ll let you do the math and figure out if a Roth IRA is a smart decision for you.

And if you do the calculations and agree with everything I’ve just said, and you’re interested in getting a helping hand making sure you’re getting the best stocks in that IRA, you should take a look at my investment community, The Wealth Advisory.

We’re long-term investors who’ve beaten the market’s returns ever since it began back in 2008. We lost less than the averages in the rout of March 2020 and recovered faster than even the high-flying Nasdaq.

In fact, despite the trying times, 2020 was our most successful year of investing. Our average gain in our model portfolio was 45% — that even includes some losers we cleared out throughout the year.

Our current open positions in the model portfolio are up an average of 181%. Here’s a screenshot of the totals in case you don’t believe me: 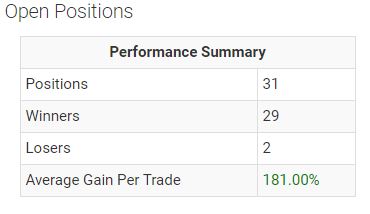 Pretty impressive, right? It’s precisely what professional fund managers can’t do: beat the market. In fact, it’s what even the great Warren Buffett couldn’t do over the same stretch.

And yet our investors have gotten the opportunity to do that every single year since 2008.

Now, past performance doesn’t guarantee future results, but my team and I at The Wealth Advisory are planning for an even better 2021.

You see, we’re not the kind of people to rest on our laurels. We might have won last year (and for the past 12 years before that), but this is a new year. That means a blank slate and an empty scoreboard.

We’ve got a good streak going, and we’re going to do everything in our power to keep it that way.

So if what I said today makes sense and you’re looking for some better advice on what to put into your Roth IRA (besides the maximum contribution every year), you might want to give The Wealth Advisory a try.

Our readers seem pretty pleased with their market-beating gains. I think you will be too.

You can learn all about one of the companies we’re most bullish on for the coming year by clicking this link. You’ll also be given the opportunity to join our investing community.

If you decide to join us, you’ll get access to that recommendation as well as all of our active positions and any future recommendations we make.

I’m admittedly a little biased since it’s my investment community. But I think you’re going to be very happy with your decision if you choose to join us.

Hopefully, I’ll see your name on my list when I send out my next stock pick later this month.

If not, hopefully, you’re going to take my advice and get that Roth fired up and loaded with cash.

And if not that, at least you’re investing somewhere. That’s honestly enough to make me a happy camper.