Recession or Not: Part II

On Monday, I took on the question of the U.S. economy and recession. Specifically, is there one on the horizon? S&P 500 earnings are falling, global growth is weakening, Germany is probably already in recession, the Fed is cutting interest rates, China's economy is slowing down — the list goes on.

And now we can add impeachment hearings to the laundry list, right?

Gotta say, I kinda doubt it. The Democratic Party's consistent failure to get anything right in the last four years is not a good track record.

Remember Hillary's campaign message? America's already great? Of course America is great. Duh. But try telling that to people whose income has been stagnant for a decade... who have watched bankers get bailed out during the financial crisis while their net wealth was decimated... for whom the American Dream is gone...

You know how many career politicians — insiders — have become president? One. George H.W. Bush. And that was because he rode a very popular outsider's coattails into office. Upon re-election, he got trounced by reformist Bill Clinton.

You don't win an election by telling people everything is great. You win by saying you're gonna drain the swamp, kick the insiders out of Washington, etc., etc. Doesn't necessarily matter if you actually do it or not. It's the message that wins. And if the Democrats don't know that by now, well, good luck.

Anyway. Rant over. Back to recession analysis...

On Monday, I focused on the issues at FedEx — it has its finger on the pulse of business and is often used as a barometer for the challenges/opportunities that multinational corporations face. Right now it's slowing global growth exacerbated by the trade war with China.

I hope I made it clear that some of the issues plaguing FedEx are of its own making — acquisition integration costs, investment in new business equipment, and abandoning Amazon as a customer. That's why it is down 40% this year while UPS is just shy of all-time highs.

Here's a table that shows the biggest economies in the world: 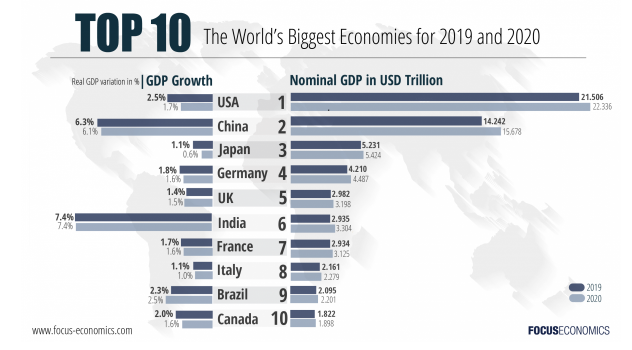 Just run down the list and it's like, oh, yeah, global economy not so hot. Growth is declining in 8 out of 10. Take Germany. On the left column it says it should be growing 1.8% this year. Nope. Last quarter, the German economy grew just 0.4%, and growth for the EU was just 0.2%.

And Germany's Manufacturing PMI fell from 51.9 in August to 50.4 in September (50 is the growth/contraction line). That is a huge one-month decline.

Those growth estimates for China are coming down, too. That 6.19% estimate growth for next year is now 5.6%.

Falling growth has pushed EU central bank head Mario Draghi into panic mode. He's committed to buying $22 billion EU bonds every month — with no end date in sight. Because with Brexit looming and Germany refusing any sort of deficit stimulus spending, what's the catalyst for growth in Europe?

Japan's central bank now owns half of all government bonds. It will also become the biggest shareholder of public companies sometime next year...

I guess in light of these two wingnut central banks, the U.S. Fed seems pretty normal. After all, Powell & Co. are simply cutting interest rates with the unemployment rate down around all-time lows in a bid to head off a recession.

That does not fill me with confidence, for two reasons. One, recessions are very difficult to predict. Why does the current Fed think it can do what Greenspan and Bernanke never did?

And two, if the Fed uses up its firepower before a recession, what's it gonna do when the inevitable occurs? Will the U.S. join Europe and Japan and offer up negative interest rates?

And besides that, central banks still seem to think interest rates stoke demand. That's laughable. Interest rates can catalyze purchases/investments that have been put off, but nobody says, "Oh, rates are down, maybe I'll get a jet ski" (except for my man Christian DeHaemer).

It's a disaster in the making...

Predicting 7 of the Last 2 Recessions

Higher taxes with a socialist government could sure do the trick. So could a big spike in oil prices if tensions get worse in the Middle East. And frankly, Iran seems to be having a pretty good time messing with just about any country that gets on its nerves.

My bottom line is that people are too bearish on the economy right now. Everybody's looking for slowing growth and recession. But the simple fact is more Americans are getting jobs and spending money. And frankly, we should be darn glad that the U.S. is not a manufacturing/export economy anymore, otherwise we'd have growth like Germany. Which is to say, Germany's dependence on Asian exports is really hurting them right now.

At some point we're gonna weed out the naysayers and the market will do what it usually does for the fourth quarter: rally.

And if you want a trade idea, here's a hint: Disney+ launches on November 12, and they've already started preorders.

What If This Is China's Trade War Goal?
Wealth Daily editor Briton Ryle is sick of the trade war with China, but he wonders if a watered-down deal to end it and move on wouldn't be a mistake. Here, he examines another possible reason for this trade war...
Interest Rates: Here We Go Again
Well, it was nice while it lasted. For the last three years or so, the Fed has been acting downright rational. But it looks like interest rates are headed lower on Wednesday...
If You Can't Beat Disney, Join... the Yankees?
Disney+ will run you $6.99 a month. Netflix is darn near double that. And even though Disney+ will only have around 20% of the content that Netflix has when it launches, it will be quality content.
Buffett's Envy: 50% Annual Returns, Guaranteed
Warren Buffett once told investors at an annual shareholder meeting, "...it's a huge structural advantage not to have a lot of money. I think I could make you 50% a year on $1 million. No, I know I could. I guarantee that."