Investing in the '51st State'

Governments have been finding out the hard way that the best way to run a country is like a corporation. You have to focus on increasing income, cutting costs, and paying down debt.

The Carribean island of Puerto Rico is aiming to do just that with a hefty bond sale of $2 billion to as much as $3.5 billion to refinance costlier debt and raise cash to cover its gaping deficit.

Normally, government bond issuances are not a problem. But in Puerto Rico’s case, two unfortunate occurrences have coincided to make this issuance very costly… a string of seven years of slowing GDP growth out of the last eight, and higher returns from government debt in the U.S.

Since investors are getting nearly twice the yield from U.S. Treasuries as a year ago, they are recalibrating their demand for yield across the entire global bond market. Couple that with a struggling Puerto Rican economy and you get credit rating downgrades on the island’s debt to speculative grade – or “junk”.

Could this be the final blow that pushes Puerto Rico into bankruptcy? Or can the island weather this perfect financial storm of hurricane proportions? You might be surprised at some rather upbeat forecasts.

Puerto Rico's recent downgrade has been in development for several years, and the trends can be seen in its Gross Domestic Product.

While the territory’s GDP has risen every year since at least 1960, the rate of that growth had recently slowed. Between the years 2005 and 2011, each year slowed a little more than the last, as shown in the graphs below. 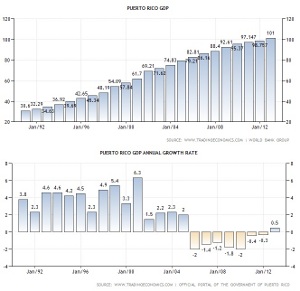 Since two consecutive quarters of negative economic growth in a country's GDP is a technical indicator of recession, Puerto Rico has technically been in recession for 7 consecutive years out of the last 8.

The territory’s high unemployment rate is another headwind. It has been above 9 percent since at least 1976, and currently sits at 15.4 percent - more than twice America’s 6.6 percent unemployment rate.

The territory has also amassed an exceptionally high debt at around $70 billion – the third highest among all 50 American states, just below California and New York.

Compounding the gravity of that debt is that it is burdened by an exceptionally small population of just 3.7 million people – only 85 percent of which are working – forming a taxpayer base of 3.1 million, most of whom work in low paying tourism, manufacturing and agriculture sectors. This compares to California’s population of 38.3 million and New York’s 19.6 million.

If that weren’t tough enough, the government has been running budget deficits for at least the last decade, averaging 2.5 percent of GDP, while the island’s pension fund is only 7 percent funded - far below the average 80 percent or so among U.S. states.

Add all of these factors together and you can see why rating agencies have lowered the territory’s credit rating to speculative.

If the lower rating weren’t enough to prompt investors to demand higher interest for lending to Puerto Rico, you also have higher rising yields among U.S. Treasuries and corporate bonds, which have been rising since the middle of 2012.

Higher yields in the U.S. and other western nations have necessitated a recalibrating of yields everywhere else, including Puerto Rico’s cost of borrowing. The graph below shows the extra yield investors are demanding from Puerto Rico’s 10-year bond over-and-above the 10-year investment-grade municipal bond yield in America. 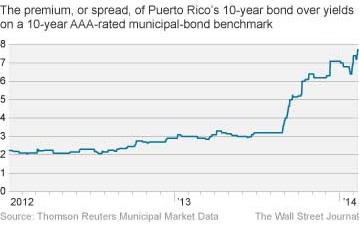 Notice when Puerto Rico’s bond yields started rising? Mid-2013, amid all the talk of stimulus reductions by the U.S. Federal Reserve.

The story is the pretty much the same all across the global bond market.

Puerto Rican bond yields which were at 5 percent just a year ago were up to 8.15 percent last week. The planned new bond issuances should likely cost the island between 8 and 9 percent in annual interest.

But because of the credit rating downgrade, the bonds won’t be bought by the same investment funds that had been buying Puerto Rico’s previous debt. The new junk-bond status means it is up to the high-yield, high-risk funds to step in and do the buying.

So it’s not as if the island is going to lack buyers. The money is there, and it is accessible. The real question is… can Puerto Rico survive under this growing mountain of debt? Forecasts seem to indicate to the affirmative.

It seems forecasters are taking the government’s word emphasising deficit reduction and cost controls at face value. Note the improvements expected over the following two years, as derived by TradingEconomics.com:

From where are they getting these upbeat forecasts? From Puerto Rico’s continuing shift in economic activity from agriculture to industry, and from the territory’s close ties with the U.S.

“The industrial sector has surpassed agriculture as the primary locus of economic activity and income,” notes the CIA World Factbook. “Tourism has traditionally been an important source of income with estimated arrivals of more than 3.6 million tourists” annually. That’s as much as the territory’s entire population!

Membership Has its Privileges

Those ties with America are more than just economic, they're political too…

In fact, the ties are so strong that some American legislators are proposing making Puerto Rico America’s 51st state. New Mexico Senator Martin Heinrich (D) last week presented President Obama with a bill calling for a binding referendum asking Puerto Ricans if they wish to join the American union. A majority “Yes” would then advance the bill for Congressional approval.

The bill comes two years after a 2012 non-binding referendum in Puerto Rico in which 54 percent voted in favor of closer ties with the U.S., 61 percent of which preferred statehood.

But even if the island remains an unincorporated territory, the economic ties between the U.S. and Puerto Rico are strong enough to pretty much guarantee the territory’s survival. Among the top 10 holders of its debt are top tier American institutions including:

Something tells me these banks are going to do everything possible to keep their investments in Puerto Rico alive. Even if it means pressuring the U.S. Federal Government to keep funding its sandy Caribbean territory.