Palladium Outlook for 2011: Demand Up, Supply Down

Are Russian stockpiles of palladium depleted?

The Russians might be tapped out of one of their most precious natural resources...

And now that the country won't be able to supply the market, palladium prices could be headed for an explosive increase.

For investors, there's a small window of opportunity to get in before prices really start to take off.

I'll give you one idea on how to yield maximum profit in just a minute...

But before I do that, it's important for you to understand why palladium prices are set to continue rising — and how I think this will help you turn a healthy profit from my latest investment idea.

Even though it's considered a “precious metal,” palladium is not used for jewelry as much as gold and silver are.

Rather, the white metal is primarily used in consumer and industrial goods. 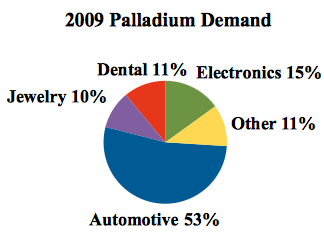 Palladium is often found in electronics — cell phones, LCD TVs, laptops, iPods, DVD players, monitors... There's no doubt that you have several electronic devices nearby, as you read this, that are filled with palladium.

But the primary application for palladium is in the manufacturing of automobile catalytic converters, which convert up to 90% of harmful gases from auto exhaust (like carbon monoxide) into less harmful substances.

In fact half of annual worldwide palladium supplies go into the production of autocatalysts.

As such, palladium demand is generally correlated to the health of the global auto industry, which has strongly rebounded this year.

Vehicle sales in every one of the top ten auto markets in the world are increasing:

Overall, global light vehicle production is expected to increase 60% through 2016. 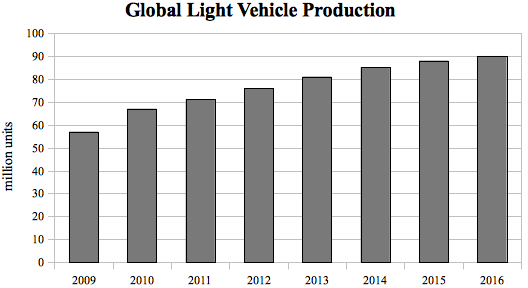 As the global auto industry continues to recover, the demand for palladium will increase with the growing demand for catalytic converters.

The recovery of the global auto industry will push the demand for palladium higher.

But the world's palladium resources are extremely limited. About 80% of the global palladium supply comes from just two countries: South Africa and Russia.

The largest palladium reserves in the world are in the Bushveld Complex in South Africa.

But half of the global supply of palladium comes from just three sources in Russia:

Norilsk Nickel is the largest palladium producer in the world. Each year, the company produces about 2.5 million ounces of palladium — enough to satisfy a whopping 40% of total global demand.

But Norilsk's palladium production isn't enough to meet rapidly growing demand from the auto industry, so Russia fills the deficit from Gokran and the Russian Central Bank.

However, industry insiders are now suggesting that there will be no sales from Russia's palladium stockpiles in 2011, indicating that the country's supplies are nearing depletion.

Director of Norilsk Nickel Anton Berlin noted in a presentation given at ETF Securities Ltd. that the consensus is there will be no sales of palladium from the Russian state stockpile next year.

The actual level of Russia's palladium stockpiles is a state secret, so Mr. Berlin had to be careful with his responses during the presentation...

He did point out that palladium sales from Russian stockpiles have been falling year after year. And he mentioned that stockpile sales are now a fraction of historic values — a clear indicator that Russia's palladium reserves are approaching depletion. 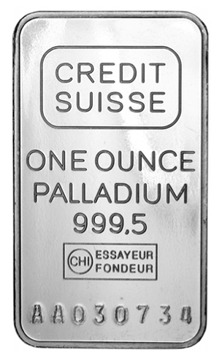 Two years ago, the Russian government announced that it would begin limiting sales of palladium from the country's inventories. Now it's clear why.

Without Russian stockpiles to help feed supply, global demand will be more dependent on mine production.

But with the majority of resources concentrated into two potentially unreliable regions, increasing production to meet demand is nearly impossible.

Norilsk Nickel has published production plans as far out as 2025, and there are no plans for any substantial increase in palladium production.

The issue here is that rising production costs are discouraging miners to focus production on palladium, which they can only sell at a third of the price of platinum.

The only other country in the world with tangible upside in terms of palladium production is Zimbabwe, but the security and political risk inherent in working in Zimbabwe is not ideal.

There is, however, one other region that has the potential to become a major palladium producer...

And it's right here in North America.

On the Northwestern shores of Lake Superior, bordering Ontario and Minnesota, the small port town of Thunder Bay is home to just over 100,000 people.

It's been long known that just 50 kilometers north of Thunder Bay, geologic structures are similar to those of the Russian giant Norilsk-Talnakh deposits — the largest nickel-copper-palladium deposits in the world.

For decades, there has been one major setback with the minerals found at Thunder Bay...

Up until recently, explorers only found low-grade ore that was often uneconomical to process.

However, modern mineral exploration technology has led the way for the discovery of several new high-grade deposits in the past few years.

These deposits currently have estimated resources of:

In total, these resources would be worth nearly $1.9 trillion out of the ground.

The entire region now has significant potential to be a major North American nickel-copper-platinum-palladium camp, as recent discoveries have demonstrated the presence of high-grade mineralization.

There are a handful of smaller companies exploring and developing similar nickel-copper-platinum-palladium projects — including one that I'm particularly excited about...

In fact I just updated my latest report — one that I put together for an investment buddy up in New York.

I'm going to publish this report for paid subscribers of my Underground Profits investment advisory and to the Wealth Daily website next week.

But you can check out this report before I do that — by simply clicking here or copying and pasting the following link into your internet browser's address bar: https://www.angelnexus.com/o/web/23291