Palladium has trounced other precious metals over the past year. This 200 day chart shows the period when palladium really broke from the pack: 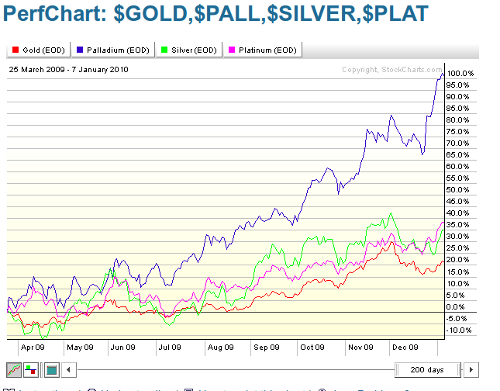 Back when I recommended palladium to Wealth Daily readers on Nov 2nd 2009, I suggested physical bullion as the best way to play it. That was partly due to lack of an ETF option.

Well now there is one. It just launched last Friday (1/8/09), and it's backed by physical palladium. It trades on the NYSE under PALL.

The expense ratio is reasonable at .60%. With the premium on palladium bullion high, this new ETF should offer investors a good way to play the rare metal.

Palladium is trading at $430 per ounce today. Here was my bull-case for palladium back in November, when it traded at $320 (also recommended it on my old blog in April, at $250):

I would classify it among the riskier metals as an investment class, but the potential upside is great. As the world continues to print money in an attempt to stimulate economies, palladium could benefit from both increased industrial demand and inflation.

The decline in car sales is partially to blame for the fall in palladium prices. But with governments artificially stimulating auto-sales around the globe, palladium prices should rebound with demand.

I also mentioned Stillwater Mining (NYSE: SWC) as a way to play the metal. That stock is up 99% since.

Palladium has had a fantastic run over the last year. It would probably be prudent to wait for a pullback at this point. That said — I'm not selling mine yet. I'm also not adding any more for now.

Since most of the world's palladium comes from South Africa and Russia, investing in palladium stocks can be a bit tricky. There are just a handful of large North American palladium producers including Stillwater and North American Palladium (AMEX: NAP)

There are a few smaller companies exploring and developing similar nickel-copper-platinum-palladium projects — including one that my colleague Luke Burgess is particularly excited about...