It's extremely cold outside. The thermometer reads a chilling -67 degrees Fahrenheit, and you look up to the sky, contemplating your life choices...

But there's nothing to look at.

The sunlight barely makes its way through the dust storm that's been raging for nearly a month.

Your family is 140 million miles away, and you're well aware that you'll never see them again. Yet in the end, you decide it's all worth it.

Despite the profound sense of loneliness you feel every day, you are deeply consoled by one encouraging fact: You are among the first four human beings to colonize the planet Mars.

You are a piece of history, and your name will be remembered forever.

It seems like the plot of a science fiction film, but I assure you it's not. Human beings will one day live on Mars.

What's more, it's likely going to happen in our lifetime. In fact, more than 200,000 people from over 140 different countries have already applied for a one-way ticket.

The mission is called Mars One. It will cost an estimated $4 billion and is set for launch in 2022. That's less than a decade away...

I could rattle off a million reasons why this is so important and what it means for the future of humanity. As much as I'd like to do that, though, this is a financial newsletter, and you're probably not looking for some inspirational message.

That being said, you just might be wondering why I'm bringing all this up. I mean, there's no money in space... right?

As it turns out, there's a lot more money in space than you might think.

When we realize that 200,000 people are driven enough to sacrifice their entire lives, it's not surprising that money becomes an afterthought when it comes to space exploration.

Ultimately, there is no stopping human curiosity. It is a characteristic our species possesses inherently; and it has driven civilization since our inception...

No one knew for sure the prosperity that would stem from the accomplishments of Amerigo Vespucci and Christopher Columbus — and entire economies were built on these costly ventures.

Some will argue that there is nothing to gain from space exploration in an economic sense. They will say there are no resources and, therefore, nothing to gain.

Of course, these naysayers are wrong. There are actually billions of dollars' worth of rare metals and gases floating around in space, a topic we'll save for another day.

The fact is tangible resources aren't the only things that create value...

Often it's services that establish worth, and when those services are incredibly scarce, consumers are willing to pay top dollar.

In 2012, the global space economy grew to $304 billion in commercial revenue and government budgets. That's a 6.7% increase from 2011, even in the face of NASA spending cuts. For perspective, that's more annual revenue than every biotechnology company in the world combined.

The fact is public investors are just beginning to show their confidence in this industry, and we are in the early days of something very, very big.

The mission was tied to a $1.9 billion contract to fly eight cargo missions to the ISS using Orbital's Cygnus spacecraft and Antartes rocket. On average, that's $237.5 million for a delivery run of about 1,500 pounds of supplies (a single semi truck can carry over 50 times that payload).

Another way of looking at it is this: $158 thousand per pound, or 7.6 times the current price of gold.

The mission was "nearly flawless," according to NASA officials, and it marks an important milestone in the commercial space industry. It also marks a milestone in space investing.

Orbital jumped 21% this month as a result of the launch and is up 47% this year. 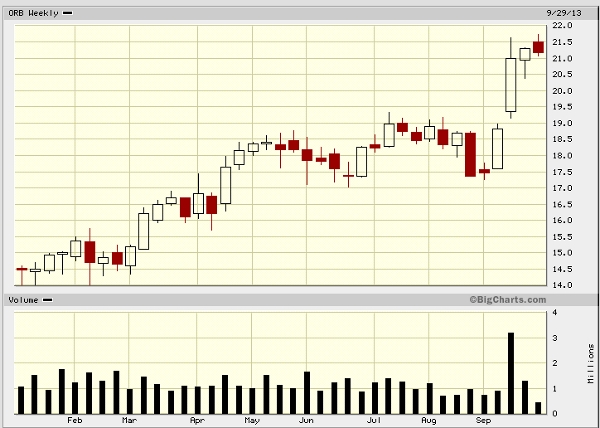 Space exploration is finally a viable industry for investors.

But, as we mentioned before, your options here are limited.

The truth is Orbital Sciences is the only space exploration pure play you're going to find on the public market right now. We're all waiting for Elon Musk's SpaceX to file for an IPO, but there have yet to be any indicators on the horizon.

You could look to Lockheed Martin (NYSE: LMT) and Boeing (NYSE: BA), but realize that defense contracting makes up the majority of their revenue. And with a recent push to cut military spending in the U.S., investors do face some risk.

Nonetheless, these companies do offer significant exposure to the growing space industry. In 2012, 18% of Lockheed's revenue stemmed from its Space Systems business; and 10% of Boeing's revenue came from its Space division.

With vast technical and financial resources, neither Lockheed nor Boeing is at risk of going under. So these companies will be able to safely gain traction as the space industry picks up speed.

I'm bullish on these players long term, but their massive market caps undeniably limit their growth potential. These are fairly low-risk, low-reward plays. For higher rewards in the space industry, we need to look a little closer to home right now...

I have a few companies to share with you, and I'm putting together my findings as we speak.

Stay tuned over the next few weeks for the first release of this report.