The first involved the discontinuation of the company's entry-level 75 kWh S and X models, and it went something like this:

It left lots of people scratching their heads, as one of the company's most important goals of the last few years has been to increase focus on affordability in pursuit of a wider customer base.

This move will virtually eliminate entry options for would-be Tesla buyers who want something more than a Model 3 but are not ready to drop six figures.

The second statement — more characteristic of Musk's late-night marijuana sessions — involved the Tesla Roadster, which is now due for a major redesign.

Apparently, the next iteration of the company's first car will no longer be limited to operation on the road. 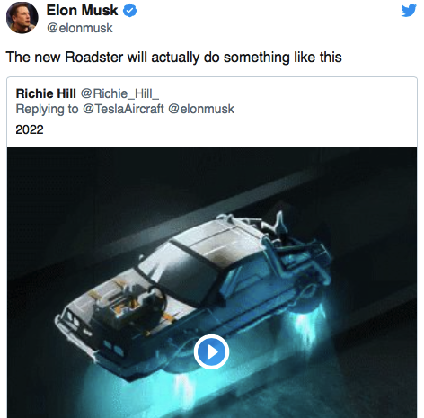 Was he serious? Was this just hyperbole? Nobody knows. Remember, this is the same guy who, less than one year ago, actually strapped his own Tesla Roadster to the tip of a rocket and fired it off into space to circle the solar system for the rest of time.

Which means when he says he's going to do something, no matter how outlandish that statement may be at the time, you would be smart to take heed.

Unfortunately, no claim, made via Twitter or via shareholder conference call or anything in between, is going to get Tesla out of the existential crisis it now faces.

You see, right now, as you read this, the engineering department at Tesla is facing the biggest hurdle the company has ever come up against.

Its entire product line is on the verge of becoming obsolete, and the problem is fundamental. It will NOT be solved by installing some new software, improving the cars' autonomous driving mode, or remodeling the interior.

The truth is far, far worse than that.

Within the next few years, Tesla will need to redesign its electric motors, which will mean substantial retooling in its fabrication plants and very likely a substantial redesign of all its models.

And because this redesign will be based on technology Tesla does not own, not only will Tesla have to spend billions modernizing the heart of every vehicle it produces, but it will also have to either pay billions in royalties to the company that does own the technology or buy the company outright.

You read that right. Tesla's electric motors are all hopelessly out of date and effectively obsolete. But this isn't a problem that's localized to Tesla products.

Just about every electric motor in the world today suffers from the same design failure that plagued the very first electric motors, built way back in the first half of the 19th century.

Every single electric motor, from the tiny one that makes your phone vibrate all the way up to the giant, 40,000-horsepower monsters that propel seagoing vessels, has the same defect.

The problem relates to efficiency and is actually fairly easy to explain. Electric motors are built to function at a single, optimal speed, measured in revolutions per minute.

Any deviation from that set speed, and the energy going into the motor no longer produces the same amount of mechanical motion.

Think of it as a bicycle with just one gear: It only really works well under a very limited range of external conditions.

The same holds true for electric generators, which are really nothing more than electric motors operating in reverse. Instead of putting charge in to get the shaft to spin, you apply an external force to spin the shaft, and charge is produced.

With today's generators, spinning that shaft at a specific speed is necessary to take maximum advantage of the production capacity. Go too fast or too slow, and you're wasting your effort.

The amount of wasted effort this creates globally is staggering, because our reliance on electric motors and electric generators is even more staggering.

It's the Most Important Mechanism Known to Man. Period.

More than half of the energy mankind produces is consumed by some form of electric motor. That energy, in dollar terms, is worth more than $3 trillion — which surpasses the annual GDP of the UK.

On the flip side, the numbers are even more dramatic, as 99% of the energy we produce comes from electric generators.

Every coal-powered plant, every nuclear plant, every hydroelectric dam, and every wind turbine employs these generators and therefore wastes billions of dollars per year running them at speeds it cannot control or resorts to big, heavy, energy-sapping gearing mechanisms to achieve the ideal spin rate.

Like I said earlier, this is a problem that's been with the electric motor since literally the first one ever created, back in the 1820s.

It took nearly 200 years for the flaw to get ironed out, but today, for the first time ever, we have a solution.

The company that made this discovery has on its hands an innovation worth tens of billions, but because it's a tech startup, nobody even knows its name... Not yet, anyway.

Well, almost nobody. Thanks to some recently sealed collaboration agreements with some midsized North American partners, the first products incorporating this revolutionary patent are already finding their way onto the market in the form of retrofitted wind turbines and high-speed train motors.

The results have been extremely impressive, which means fairly soon, you're going to start seeing major companies fall in line as well.

In the last couple months, this company took its assault on the establishment a step further by purchasing a smart battery technology that promises to do the same thing to the rechargeable battery market.

Using complex AI algorithms, it has managed to perfect a power management system that constantly tests the multiple cells of a large battery array (the average Tesla battery has more than 7,000) and allocates power based on the individual performance of those cells.

This is something nobody has ever been able to do before, and the end result is a longer-lasting, more reliable, higher-capacity battery that's the same size and weight of the current standard.

When combined with the smart motors, the efficiency advantages of the complete system are staggering.

Just think about it: If you suddenly got the opportunity to get 6%, 8%, even 10% more bang for your buck while enhancing service life and substantially decreasing maintenance costs, wouldn't you do it?

In all likelihood, you wouldn't even have a choice, because if you didn't do it, your competitor would, and sooner or later you'd be out of business.

The company behind all of this is small, but it's already well on the road to flipping the industry upside down.

Today, its market cap is well below $50 million. A few years from now, if things continue down the path they're on today, it could be 200 times as big.

When I learned all of this just a few weeks back, it took about half an hour for all the implications to sink in.

And then I got to doing more research on what the company does and what it could mean.

If you want to learn more about this, click here.

Within that link you'll get the rest of the story, including the company's name and ticker symbol (yes, it's publicly traded).

Coming to us from an already impressive career as an independent trader and private investor, Alex's specialty is in the often misunderstood but highly profitable development-stage microcap sector. Focusing on young, aggressive, innovative biotech and technology firms from the U.S. and Canada, Alex has built a track record most Wall Street hedge funders would envy. Alex contributes his thoughts and insights regularly to Wealth Daily. To learn more about Alex, click here.

Russia's Plan to Take Down Elon Musk and SpaceX
The Cold War between the United States and Russia may be heating up again. And this time, Elon Musk’s SpaceX is caught in the crosshairs. Elon and his rockets continue to attract attention to the burgeoning space industry, another player has re-entered the field: Russia...
Is Tesla's (NASDAQ: TSLA) AI Chip the Ultimate Edge?
Lots of people like to throw around “Apple moments” when talking about Tesla. We count at least half a dozen, but another one has just occurred. Tesla's (NASDAQ: TSLA) new AI chip is coming, and it's expected to give the automaker a leg up on the competition...
Every Tesla on the Road Today Is Already Obsolete
Just about every electric motor in the world today suffers from the same design failure that plagued the very first electric motors, built way back in the first half of the 19th century. But one company has finally figured out how to fix it. And it's publicly traded.
Is it Time to Invest in Robo-Taxis? We Sure Think So.
2019 is shaping up to be the year of the robo-taxi. GM's executive-level shakeup this week is just one indication of what's to come. Waymo, Daimler, Tesla, Uber, and Lyft are also making moves to get in on the autonomous taxi industry...
Buffett's Envy: 50% Annual Returns, Guaranteed
Warren Buffett once told investors at an annual shareholder meeting, "...it's a huge structural advantage not to have a lot of money. I think I could make you 50% a year on $1 million. No, I know I could. I guarantee that."