Editor's Note: This article originally appeared in Wealth Daily with an article about by Steve Christ on Nov. 5, 2009.

The price of gold hit an all-time high yesterday with the announcement that India has recently bought 6.7 billion dollars worth of the heavy metal from the International Monetary Fund (IMF). As I write this, gold is a few dollars short of $1,100 an ounce.

Now, $6.7 billion is equal to a month's worth of U.S. military operations in Iraq, and doesn't even come close to any of the bailout packages awarded to U.S. financial institutions... but it was enough to purchase half of the total amount the IMF is selling this year. And $6.7bil is more than pocket change for India...

According to Yahoo Finance:

The sale to India was nearly half the 403.3 tonnes of gold that the IMF has targeted for sale over the coming years... The Washington-based IMF, which currently holds 3,217 tonnes of gold, is the third-largest official holder of the precious metal after the United States and Germany. India is the world's biggest consumer of gold, importing between 700 and 800 tonnes of the metal every year or 20 percent of global demand.

The amount of money that India's central bank spent on gold is not as significant as the fact that they bought gold at all.

For the past fifteen years, major governments like France, Russia, and Germany have been selling gold on the open market. This has obviously had a bearish effect on the price of gold.

This year, not only are none of the major holders of gold selling the metal, but up-and-coming countries like India and China are buying it. China recently reported that it was doubling its gold reserves to 1,054 tonnes.

Both of these countries are selling U.S. Dollars and buying hard assets. They simply believe that the dollar will continue to fall. The fact that the Fed announced today that they would hold the Fed Rate to 0.25% for the foreseeable future backs their argument.

Last week, I told you about a "double top" in the Russell 2000 and that you should buy puts on the corresponding iShare (NYSE: IWM). Those puts surged 59% the next day.

Today I'd like to take a look at the ten-year gold chart... 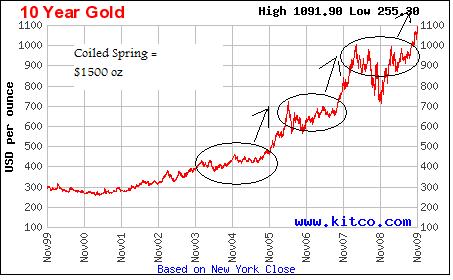 I've circled patterns on the ten-year gold chart above. These patterns are called "coiled springs." The thinking is this: markets tend to go from trading for long periods of time in tight ranges. This is interrupted by massive breakouts. Sideways markets build energy like a weight on a coiled spring; when the weight is removed, the spring leaps forward.

The chart shows that after each sideways period (lasting roughly two years), the price of gold jumped an amount equal to that which it went sideways. This would suggest that this rally is going to push gold to $1,450 to $1500 an ounce.

And that's just for starters... I personally believe that the next liquidity-fueled bubble market will be in gold and other hard assets.

One of the most obvious ways to play this surge in gold prices is to buy junior gold miners — and I've been recommending those all year, to my readers' good fortune.

Another way to play the new gold boom is to buy companies that help miners mine the yellow metal.

You may not be aware of it, but there is a new gold mine in Mongolia. In fact, it is the world's largest — a mine bigger than the state of Ohio!

The spending on this mine will double the GDP of Mongolia. That's right — double... which means Mongolia will become to Central Asian minerals what Dubai is to Middle Eastern oil.

This boom all stems from a recent government corporate tax cut from a draconian 68% to a more modest 30% of profits.
And this is just the first deal. Mongolia is rich in mineral wealth. The floodgates have been thrown open.

This coming gold rush in Mongolia will flood the country with cash. Early investors will literally make their fortunes.

That's why I'm getting on a 26-hour flight this coming Monday — and braving the cold (the high on Sunday was 13°F), to find out the best way to play it. I've arranged to meet with the largest broker in Ulaanbaator and some well-connected ministers and politicians.

Believe me... my date book is stuffed with tours and meetings. I will be doing my due diligence with my boots on the ground. Look for my report in your inbox on January 1, 2010.

Stay tuned for more next week,