Have you had enough of those new housing developments whose homes are all stamped out of the same design? It's as though someone went on a rampage with a gigantic cookie cutter.

Well, things are about to change. 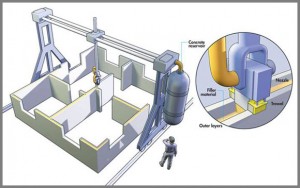 They aren't getting rid of the rows of replicated houses... they're just going to change the way they stamp them out. Instead of using cookie cutters, they'll be using cookie squeezers.

By now, most of us have heard a lot about 3D printers, whose computer-controlled nozzles move along a grid, molding small mechanical parts by ejecting liquid plastic or other materials one thin layer at a time.

Now imagine one of those printers the size of small building, equipped with a set of much larger nozzles spewing out concrete...

For better or worse, it would revolutionize the way homes are built, with implications for construction companies, building material producers, the environment, and jobs.

At the University of Southern California, a team of students led by Professor of Industrial & Systems Engineering Behrokh Khoshnevis has built a computer-controlled injection system that pours concrete according to a pre-loaded set of blueprints.

"Comprised of robotic arms and extrusion nozzles, a computer-controlled gantry system moves the nozzle back and forth... by which large-scale parts can be fabricated quickly in a layer-by-layer fashion," the project's webpage explains. "The chief advantages of the Contour Crafting process over existing technologies are the superior surface finish that is realized and the greatly enhanced speed of fabrication."

The entrepreneurs among us can quickly see the business potential here. "Contour Crafting technology has great potential for automating the construction of whole structures as well as sub-components," the team promotes. "Using this process, a single house or a colony of houses, each with possibly a different design, may be automatically constructed in a single run, embedding in each house all the conduits for electrical, plumbing and air-conditioning."

I bet urban developers really like that one part... "each with possibly a different design." Now we're getting somewhere. Contour Crafting can give us the speed and efficiency of a cookie squeezer without the repetitiveness of a cookie cutter. Nice.

Its applications also include humanitarian projects, such as natural disaster relief. "It can take several months or years before disaster victims are placed in permanent housing," the USC team's Urban Policy Brief reassures.

"Imagine comfortable and livable emergency shelters (not tents) constructed rapidly for long-term use... The potential applications of this technology are far reaching including but not limited to applications in emergency, low-income, and commercial housing."

But the team isn't stopping there. When they say "far reaching," they mean f-a-r reaching — like into space.

"Contour Crafting will most probably be one of the very few feasible approaches for building structures on other planets, such as the Moon and Mars, which are being targeted for human colonization before the end of the century."

They may have found water on Mars, but they'll be hard-pressed to ever find any trees. And in the absence of concrete, you can always use dirt. After all, mud bricks — "adobe" in Latin America — have been in use for centuries.

Possibly the first impact of this new technology will be on construction materials and their production. Nature lovers will certainly like the idea of less lumber being used. Although some lumber will still be required for doors, window frames, cabinets, and flooring, at least the use of lumber in the home's framework would be spared.

Of course, that won't sit well with lumber companies, which will have to lay off untold thousands of workers over time.

Other casualties in the construction materials space could be suffered by drywall producers. Yet Warren Buffett is likely none too worried about his 30% stake in USG Corporation (NYSE: USG), one the largest manufacturers and distributors of building materials worldwide, specializing in "gypsum and related products, including gypsum wallboards, joint compounds, cement boards, gypsum fiber panels" and "gypsum fiber." It'll probably be another decade or two before the Contour Crafting system impacts USG's bottom line.

But the potential loss of construction jobs is something of a different story. As with any new technology, the jobs created by the new industry often meet or even beat the number of jobs lost in the old industry it replaces. Employment opportunities are merely shifted from the old industry to the new, though new skills will have to be acquired.

But the USC team behind the Contour Crafting system sees changes for the better throughout the construction industry as a result of its technology.

"Manual labor will be significantly reduced. Muscle power will be replaced by brain power. Women and elderly workers for the first time will find new job opportunities in construction," the team projects in its report.

The heavy-lifting jobs would be reduced, but not the trades.

And with the reduction of heavy labor jobs comes an increase in safety. "Safety elements inherent in the process will signiﬁcantly reduce the rate of on-the-job injuries that are so prevalent in the construction industry today, thereby lowering the costs of litigation, insurance, and medical treatment, to say nothing of saving lives," the report promises.

When put together, the reduction of construction time from nine months to one month combined with interior finishes, the use of cheaper and fewer building materials, and the lower costs of labor promises to make homes cheaper to build and more affordable to own.

While all of the above listed benefits do indeed make the Contour Crafting system a must-have new technology for the future, one benefit we mustn't count on is the promise to make home ownership more affordable.

Why? Because when you break down the price of a property, the value of the actual building on the property is only a small part of the total price. It's the land beneath the building that is costing you the largest portion.

Besides, property prices are set according to much more than just the cost of construction. Interest rates, population growth, nearby job availability, and nearby intangible amenities such as parks, schools, shopping, transportation, and scenery also must be taken into account.

And of course, there are always the supply-demand fundamentals, which can drive prices higher in boom times and lower in recessions, regardless of how much went into the construction of the building on the property.

Even so, technology is going to change not just how we live but also what we live in. And Contour Crafting is certainly going to pave the way for new advances in home construction.

With small-sized 3D printers already a hot segment of the computer industry, it won't be long before 3D construction becomes a viable investment opportunity within the construction space.

Keep your eye on it. Investment opportunities should open up as soon as construction companies start using the new technology...

But also consider the business opportunities it presents. The apparatus seems low-cost enough for a small construction team to afford one of its own, offering low-cost garage or tool shed construction services around town.

Imagine you and your construction friends were equipped with an apparatus of your own. You'd be stamping out everything from backyard huts and fences to tree houses and patio decks. You might even be commissioned by your city hall to replicate miniature Eiffel Towers, Leaning Towers of Pisa, or President Lincoln statues all over town.

As with anything else, you are limited only by your imagination and follow-through.