The sudden clamor for gold properties in Central Mexico is handing triple-digit gains to investors.

A recent bidding war over a mid-sized gold deposit in the Mexican state of Zacatecas has already yielded a +100% return for investors since the beginning of the holidays.

Long-term investors have seen much higher gains, however, with two recent discoveries in Zacatecas. These discoveries have uncovered approximately $150 billion worth of precious and base metals. It was all found in...

Zacatecas is a landlocked state in Central Mexico, best known for its historic gold and silver mines. 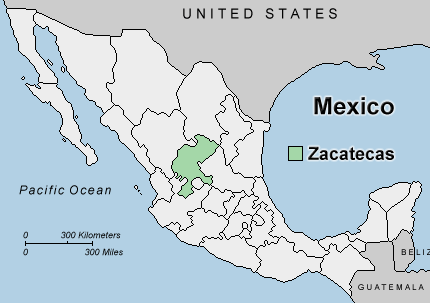 The state's incredibly rich silver deposits were first discovered by colonial Spanish explorers during the 16th century. One hundred years later, the mines of Zacatecas were producing nearly a third of Spain's silver and a fifth of the world's supply.

But despite having already produced the equivalent of about $2.5 trillion worth of precious metals for the Spanish, geologists are using modern exploration techniques to find new gold and silver deposits in Zacatecas today.

Recent discoveries at the Peñasquito and Camino Rojo projects — both located in northeastern Zacatecas — have revealed a total resource of 40 million ounces of gold and the equivalent of 5.6 billion ounces of silver.

To gain control of the Camino Rojo project and expand operations in Zacatecas, Goldcorp made an offer to buy Canplats for ~$230 million back in mid-November.

Under the terms of the agreement, Canplats shareholders would receive 0.074 of a Goldcorp share and one share valued at C$0.18 in a new exploration company, representing a combined value of approximately C$3.60 per share.

Shares of CPQ instantly jumped 40%. And many investors walked away quite happy.

But the action in CPQ wasn't finished...

And again, shares of CPQ jumped instantly... this time by another 50%.

Goldcorp exercised a prearranged right to match the offer on Christmas Eve. But over the weekend, Minera Penmont increased their offer to C$4.60, which Goldcorp matched again on Wednesday.

The offer for Canplats now still stands at C$4.60 in cash and shares of a new exploration company. And with a bidding war still underway, shares of CPQ have already increased as much as 102% since Goldcorp's initial offer.

With such a frenzy of interest in Canplats, I decided to take a look at other companies that have gold projects in Zacatecas. Here are...

Corex Gold's 40,000 hectare Zuloaga property is located less than 10 miles from Peñasquito. The company has mapped the property and collected a few samples, but the project remains under-explored. Despite the limited exploration, Goldcorp has already reserved the right to earn a 70% interest in Zuloaga by spending $4,000,000 on the property over a five-year period. Goldcorp can gain another 10% interest in the Zuloaga property by funding the full construction of a mine.

Quaterra Resources controls five 100%-owned concessions totaling 69,034 hectares in Zacatecas and San Louis Potosi. These concessions are even less explored than those held by Corex. Nevertheless, Goldcorp recently acquired the right to earn a 65% interest in Quaterra's Zacatecas properties by funding a $10 million exploration program.

Investment access to gold projects in Zacatecas is limited. But geology does not abide by political borders. There are many other gold and silver projects in the surrounding states of Durango, Coahuila, Nuevo Leon, and San Louis Potosi.

As always, I recommend looking for companies with quality projects and strong management with experience in the full development of mineral projects.

And with the New Year right around the corner, smart investors will widen their vernacular to include not just precious metals like gold and silver, but rare earth metals, as well.

With a new decade comes new technology... And today, Jan. 1, Denmark relinquishes its control over a $273 billion rare earth metals resource — the same metals essential for nearly all modern electronic devices. We reveal how you can get in on massive profits from these technology metals in our new report.

Enjoy the rest of your holiday,