Meat Is the New Gold

Written by Jason Williams
Posted May 8, 2020

In case you’ve missed it, meat processing and packing plants across the country are shuttering their doors as coronavirus outbreaks strike their employees.

When the news first broke, it spurred a run on grocery stores unlike anything we’d seen since all the toilet paper in the country sold out a few weeks before.

People are understandably worried about the immediate consequences of the meat packing industry shutting down — scarcity of meat products like steaks, pork chops, and chicken breasts.

But I’ve heard very few people talk about the longer-term repercussions of shutting down U.S. meat packing plants. And that’s the scarcity of meat going forward.

It’s an expression we’ve all heard, but it’s usually used metaphorically. In real life, culling the herd is probably the worst day a farmer or rancher can ever imagine.

It involves killing off your animals because you have nowhere to take them to turn them into food for a hungry nation. And it’s sad for farmers and ranchers for two reasons.

The first is the obvious one. They bought those animals, raised them, and spent a good amount of time and money in the process. Now, with nowhere to sell their livestock, they’re forced to kill them off and watch any hope of paying off bills and feeding families go down the drain.

But secondly, it’s because, despite what fraudulent groups like PETA might tell you, farmers love their livestock. They depend on those animals to feed their own families. And they don’t enjoy killing them.

But around the country, that’s exactly what farmers and ranchers are being forced to do. Herds of cattle, flocks of chicken, and passels of hogs are being slaughtered.

For an animal lover (and a meat eater) like me, it’s a devastating situation. I can get over my love of animals and eat them by knowing I’m making sure their sacrifice wasn’t wasted.

But that’s exactly what’s happening right now. All of those animals, all of that potential food, is going to waste.

And it isn’t just livestock that’s being wasted as I type. Supply lines are broken. Farmers have tons of food for us, but they just can’t get it to market.

Some have set up stands to sell directly to consumers. Some are trying the online route and hoping for digital sales.

But many are forced to run a lawnmower over their fields like this poor fellow in Florida running a brushcutter behind his tractor to cut down his crop of eggplants ready for harvest. 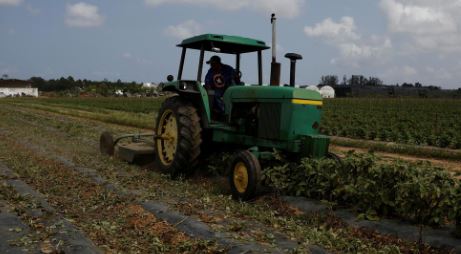 With nowhere to sell them, it’s his only option.

Now sure, there are immediate consequences of stuff like this. You’re already seeing them on the shelves of your grocery store.

But, like I said earlier, I don’t hear many people talking about what happens next year…

What happens to the cattle herds next year when they get killed today? What happens when we go back to a more regular life and distribution chains start functioning again?

Do you think there will be a lot of meat available then? It’ll be tough since we killed off most of the things that make new meat this year.

And how about produce and row crops? If farmers make zero revenue this year, how will they pay back the loans they took out to buy seed, young plants, and fertilizer? And if they can’t repay their loans, how many will walk away from their farms?

And if the ones that are still around can’t get loans because they’re already deep in debt from the missing harvest of 2020, how do you think they’re going to pay for their seed for the 2021 season?

It’s these longer-term repercussions that nobody’s looking out for. Meat may be hard to find at the store today, but next year, it’ll likely just be hard to afford.

When distribution chains come back, there’s going to be less available for a population that’s still about the same size. And we all know what happens when reduced supply meets increased demand — prices go up.

The more scarce and sought after a commodity is, the more valuable and expensive it becomes. And that means meat might just become the new gold.

Get used to that kind of inflation because we’re going to see a lot of it and not just because the printing press goes “brrr.”

Economies are in disarray across the globe. We’re staring down the worst recession since perhaps the Great Depression. Thirty-three million Americans are unemployed.

Investors are pumping money into a few stocks, taking market breadth down to levels even worse than just before the dot-com crash. Six companies make up over 25% of the S&P 500’s market cap.

And yet stock markets are nearly back where they were before this all happened. In fact, the Nasdaq is up for the year as I type. But it’s not just in the stock market where you can see the literal insanity unfold…

We’re taking advice on climate change from a teenager. And we’re listening to medical advice from a tech billionaire.

But hey, Bill’s rich so he’s got to know more than the rest of us, right? And Greta’s on TV a lot so that probably means she’s 100% right, too.

I’ve been called a few things this week for my views on where the global economy is headed in the coming months. “Debbie Downer,” “pessimist,” “catastrophist,” even “doomsayer.”

But what I am is a realist. I’m optimistic on the long-term future.

Hedge funds are more defensively positioned than ever before. Corporate officers are more pessimistic than they were during the 2008–2009 Great Recession. Institutional investors are holding back on buys.

Unemployment is at levels we’ve never seen before and a lot of those jobs aren’t coming back. Corporate CFO’s are changing the label “temporary” before the word “layoffs” to words like “permanent” and “indefinite.”

Warren Buffett’s Berkshire Hathaway spent all of March and April selling stocks and raising money, not plowing the nest egg into distressed companies. Buffett even went so far as to call off stock buybacks, suggesting he doesn’t even see the value in buying his own company’s stock.

If the greatest investor of his generation doesn’t see any opportunities, that’s got to tell you something. Either the Oracle of Omaha (and the rest of the “smart money”) have gone senile in their old age, or they see something coming the retail world is completely ignoring.

The Show Must Go On

But what are we to do in a situation like this where the stock market has completely decoupled from reality? Do we bury our heads in the sand and wait for it to be over?

Do we try to trade the volatility that’s sure to thrash the markets up and down as the bulls and bears engage in a tug of war to see which side is right?

If you compare the current market to the GFC of 2008–2009 on a chart, you can see where we are in this process. It’s not a good place to be. It’s that point where there’s too much optimism and all the future bad news hasn’t been priced into the stocks. 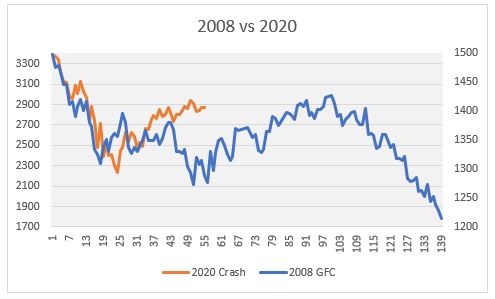 Mark Twain is often cited as saying that history doesn’t repeat, but it rhymes. I don’t know if he really said that, but whomever did was correct. And this rhyme has a few more verses to go before the poem’s over.

I’ll tell you, as a long-term investor, I’m sticking to my plan and I’m not changing my strategy all that much. I’m using the strength to sell off some of my weaker positions. And I’m adding to positions in companies that I see benefitting from some of the permanent changes COVID-19 has forced.

But that’s not any different than what I was doing earlier this year. Our society has been shifting to a more digitally connected world for a long time now. Coronavirus lockdowns have only accelerated that shift.

One of my top picks for the extremely connected world of the future controls the backbone that our nation’s 5G network will sit on. From the major wireless carriers to the U.S. government, everyone who wants to take advantage of 5G is going to need to get on this company’s network.

It’s still a little-known stock, but that’s all changed as more investors have started to realize the stranglehold it’s got on the cable companies, wireless carriers, and everyone else hoping to develop and use a 5G network.

Shares are up about 40% in the past few weeks, even as the markets were whipsawed by the bulls and bears. There’s still a lot more room to run, though.

But every day you delay, more investors find out about this company and its potential to dominate the U.S. 5G market. And with every new investor, the share price is going to get higher and your potential profits will get lower.

So, take some time today and watch the presentation we put together detailing the opportunity. Just click here for access to that.

Or, if you prefer to digest the written word, you can read this report we’ve compiled with all the same details. Just click here and you’ll be redirected.

The choice is yours. Just make sure you choose soon so you don’t miss out on the epic run this company is just starting.