Earlier this week, the Federal Reserve came out in favor of staying with its plan to reduce its monthly bond-buying stimulus by another $10 billion, citing strong economic data as an indication the economy does not need the extra help any more.

The index rose to 17.8 in June, its highest level in 9 months since September of 2013, posting 12 months of manufacturing growth out of the last 13. Manufacturing has been so robust, the Philly Fed index has averaged 12.0 over the past year, much higher than the 46-year average of 8.48.

So is this it for ultra-low interest rates? Is the Fed going to start hiking rates sooner rather than later, given such a long stretch of impressive manufacturing activity?

The Fed is still promising to keep rates low for a “considerable time” after its monthly bond buying program is whittled down to zero. The Fed is still not completely comfortable with the economy’s progress.

Let’s get an idea of what the Fed sees as strong and weak about the economy.

Strong: Manufacturing on the Rise

The monthly “Business Outlook Survey” conducted by the Philadelphia branch of the Federal Reserve system asks businesses in the manufacturing sector of Eastern Pennsylvania, Southern New Jersey, and Delaware to comment on the business conditions they expect to encounter in the next six months. The 75 respondents this month indicated they expect to see “a notable improvement” and “continued growth and employment increases,” the central bank revealed. 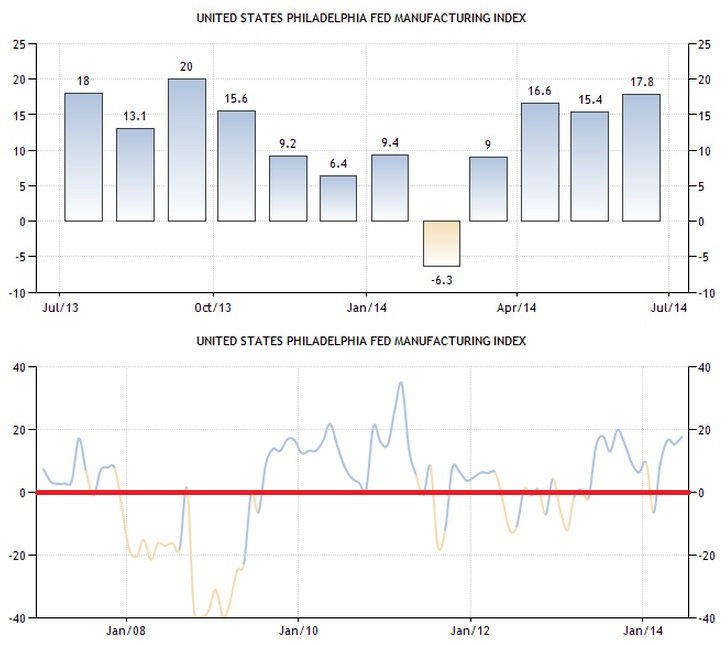 “Philadelphia Fed Manufacturing Index is based on The Business Outlook Survey of manufacturers in the Third Federal Reserve District. Participants report the direction of change in overall business activity and in the various measures of activity at their plants: employment, working hours, new and unfilled orders, shipments, inventories, delivery times, prices paid, and prices received.”

Part of the Philly Fed Index includes new orders received by American manufacturers, whether from local businesses or abroad. As noted below, after falling precipitously during the 2008-09 financial crisis, new orders have increased dramatically up to a new all-time high of $499.8 billion in April of this year. The manufacturing sector has never been more productive than it currently is.

Manufacturing is closely watched because it is one of the strongest sectors for employment prospects. An estimated 17.4 million jobs in the United States—about one in six private sector jobs – are provided by the manufacturing sector, either directly or indirectly. It is also one of the better paying sectors, with an average salary of $77,505 annually.

Hence, growth in the manufacturing sector bodes well for job creation, consumer spending, the housing market, and so on down the line, permeating increased wealth throughout the economy. And since many of the orders from overseas, a healthy manufacturing sector also implies healthy exports and increasing income for the nation as a whole.

This solid trend in manufacturing as of late, plus a number of strong new payrolls reports recently, have reassured the Federal Reserve the economy is strong enough to be weaned off of its monthly bond-buying stimulus.

Alright, so this explains why the Fed is going to continue reducing its monthly bond purchases. But doesn’t all this robust growth in manufacturing and job creation also warrant raising interest rates soon? After all, the latest inflation number of 2.1% in May – which follows April’s inflation rate of 2% - has reached and breeched the Fed’s target of 2%. Why is it holding pat on rates until late 2015?

While the latest inflation numbers have hit the Federal Reserve’s stated target of 2%, the Committee is not yet prepared to start raising interest rates because a few dots on the graph do not a trend make. As noted below, since early 2012 inflation has reached or surpassed 2% four previous times, each time falling to near 1% within months.

What the Fed wants to see is some staying power; it wants to be sure inflation’s future projection is solidly rooted at 2%. It is looking at “longer-term inflation expectations,” which it sees as not alarming at all, but as “stable”.

Before raising interest rates, the Fed wants to see “evidence that inflation will move back toward its objective over the medium term”, not just over a couple of months. In fact, at noted in the graph below, the monthly inflation rate has reached or breeched 2% some 29 out of the last 55 months – more than half the time! And yet the Fed didn’t touch interest rates even once. 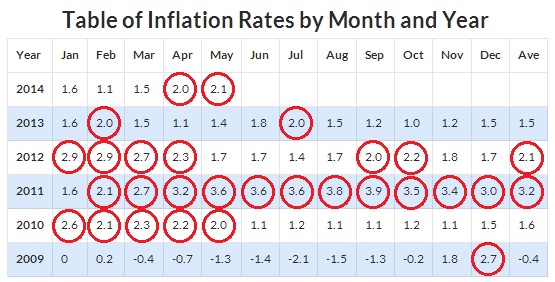 As well, despite averaging an outstanding 198,000 new non-farm payroll jobs per month over the past 12, and recouping all the jobs lost by the financial crisis as jobs returned to their pre-crisis levels, the unemployment rate is still too high at 6.3%, with 9.8 million still unemployed.

But the number of unemployed is actually worse when we include those who simply gave up looking. As the Bureau of Labor Statistics points out:

“In May, 2.1 million persons were marginally attached to the labor force… These individuals were not in the labor force, wanted and were available for work, and had looked for a job sometime in the prior 12 months. They were not counted as unemployed because they had not searched for work in the 4 weeks preceding the survey.”

In reality, then, the unemployed actually number 11.9 million, which raises the real unemployment rate by 21% to more than 7.6%.

But even when medium-term projections for inflation eventually surpass the Fed’s 2% target, and the unemployment rate falls to a healthier 5% area, the Committee might still not push interest rates up very much very fast.

“The Committee currently anticipates that, even after employment and inflation are near mandate-consistent levels, economic conditions may, for some time, warrant keeping the target federal funds rate below levels the Committee views as normal in the longer run.”

This last comment from the statement adds a third criterion besides employment and inflation: “economic conditions”. That is pretty broad and vague a term, and gives the FOMC plenty of room for interpretation.

The Bull Will Continue to Run

Investors aught not make the mistake of isolating one or two monthly numbers as a signal the Fed will hit the brakes and start turning up interest rates any time soon. Indications are the Fed wants to be very certain the economy is solidly on track before doing anything that will slow it down, which is what lifting rates does.

The stance for investors is to remain invested in equities. Yet bonds shouldn’t be left completely out of the picture just yet. There should still be another two years of solid yields in bonds and bond ETFs to be had. Keep in mind that even when rates do start to rise, likely in the second half of 2015, they won’t rise by much for a while.

The general consensus among Federal Reserve bank presidents is that rates will likely rise to slightly more than 1% by the end of 2015, and to around 2.5% by the end of 2016. That is still pushing the gas, not slamming the brakes.