Pot Legalization and the Art of Socially-Responsible Investing 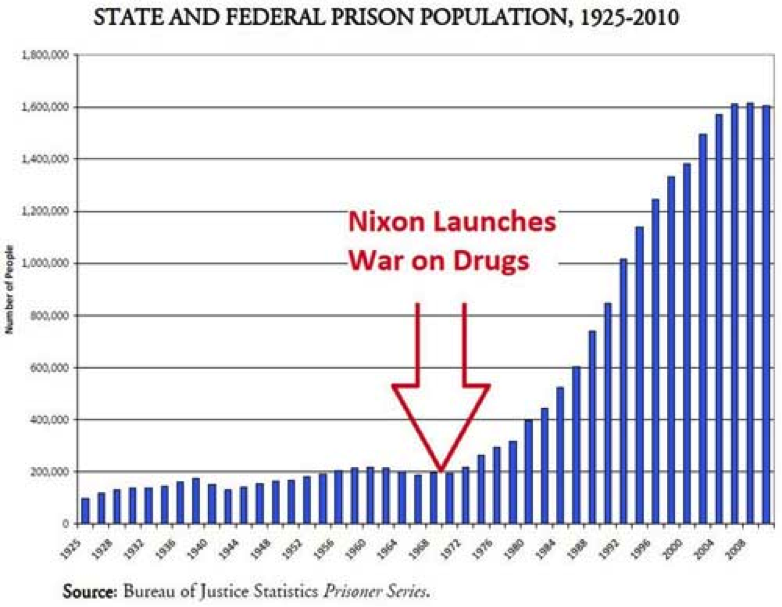 While I have no love for the man that squatted at 1600 Pennsylvania Ave from 1969 to 1974, it would be dishonest to say that Nixon started the war on drugs.

Sure he “declared” it on national television, but the real war – like most wars – began long before anyone really knew what was going on.

The truth is, the drug war actually began in 1930, when a man by the name of Harry J. Anslinger was appointed as the first director of the Federal Bureau of Narcotics.

Activist Peter Guither did an excellent job summing up Anslinger's role in the war on drugs, writing …

In 1930, a new division in the Treasury Department was established — the Federal Bureau of Narcotics — and Harry J. Anslinger was named director. This, if anything, marked the beginning of the all-out war against marijuana.

Anslinger was an extremely ambitious man, and he recognized the Bureau of Narcotics as an amazing career opportunity — a new government agency with the opportunity to define both the problem and the solution. He immediately realized that opiates and cocaine wouldn’t be enough to help build his agency, so he latched on to marijuana and started to work on making it illegal at the federal level.

For Anslinger, the war on marijuana was job security. It was also a way for him to act on his racist tendencies. Truth is, Anslinger was a violent racist. Check out some of his more infamous quotes …

“There are 100,000 total marijuana smokers in the U.S., and most are Negroes, Hispanics, Filipinos, and entertainers. Their satanic music, jazz and swing, result from marijuana use. This marijuana causes white women to seek sexual relations with Negroes, entertainers and any others.”

“the primary reason to outlaw marijuana is its effect on the degenerate races.”

“You smoke a joint and you're likely to kill your brother.”

“Reefer makes darkies think they're as good as white men.”

“Marijuana is the most violence-causing drug in the history of mankind.”

This, my friends, was the nation's first drug czar and the man who launched a war that has now lasted for 86 years. It has resulted in the loss of millions of lives around the world – mostly the poor and disenfranchised, and the price tag of this war is in the trillions. Nearly all, by the way, ponied up by taxpayers.

So when folks ask me why I invest in legal cannabis, the answer is simple: It's one of the most profitable socially-responsible investment opportunities in the world.

As more investment funnels into the industry, more folks have skin in the game. This results in pressure on policy makers to alleviate regulatory hurdles.

Why do you think so many politicians are now backing state-based legalization agendas? Why do you think we're now seeing presidential candidates talking about “letting the states decide” and re-scheduling cannabis on the federal level?

This is now debated in state and federal elections because the majority of voters want to see an end to cannabis prohibition. And that, plus the enormous amount of money states rake in from tax revenues, is why we're seeing this movement to end prohibition actually gain steam.

By investing in the companies that are facilitating this movement, we, as investors, are funding positive change, and we're making a few bucks along the way. What could be better?

Now there are any number of ways to invest in legal cannabis, but for most investors, the simplest way is to get some exposure to a handful of publicly-traded legal cannabis companies.

OrganiGram (TSX-V: OGI), a producer of organically-grown cannabis, is one of my favorites, but there are plenty more. In fact, there are five specific stocks outlined in the report: Marijuana Outlook: Stocks to Buy in 2016. The report is free, and you can get a copy for yourself by clicking this link.

Bottom line: Not only is investing in legal cannabis a profitable investment, it's also a socially-responsible one. And that, my friend, is an unbeatable combination.