Is This CBD Stock About to Become a Coronavirus Play?

A couple of months back, I wrote to you about a company that was getting lined up to make a big splash for investors. It had an acquisition that would add millions to its top line and get its products in front of millions of more customers.

But shortly after my article, I got word from the company that the deal had fallen through. The board walked away because of the risks the other company hadn’t disclosed in the initial negotiations and some bad-faith moves made by the owners of the acquiree.

And since then, the stock has just taken a beating. Management came out and reported record numbers for the company’s third quarter. But since those sales were lower than the second quarter, investors dumped shares and triggered a selloff.

Then coronavirus hit the markets and dragged everything down. And this company’s stock was no exception.

But, in an interesting turn of events, it’s the coronavirus crisis that’s showing just how powerful and valuable this company truly is.

From a CBD Stock to a COVID Play

The company I’m talking about is Alkaline Water Company (NASDAQ: WTER). It was lined up to buy AQUAhydrate, another enhanced water brand.

And the deal seemed perfect. Alkaline had the distribution and the manufacturing infrastructure and AQUAhydrate came with celebrity owners, Sean Combs (“Puff Daddy”) and Mark Wahlberg ( “Marky Mark”).

AQUAhydrate would get access to Alkaline’s distribution network and co-packing partners, and Alkaline would get all that sweet publicity from AQUAhydrate’s stable of celebrity influencers.

But the numbers AQUAhydrate claimed to have turned out to be just a claim. And when Alkaline’s board really dug into the financials, they realized ending the merger was the best thing they could do for shareholders.

The merger would have been great from a publicity standpoint, but taking on a struggling business would have been terrible for the long-term success of the company. So, I’m happy the board made it did, even though it had an immediate negative effect on the share price.

Because Alkaline is a very solid company. It’s got low debt. It’s got growing sales. And it’s got one of the most streamlined and efficient operations in the business.

And that’s why the company may become a COVID-19 play as you’re reading this.

Sorry, We’re out of That

In case you haven’t noticed, our supply lines are under extreme stress right now. Just go to any grocery store and look for toilet paper, your favorite brand of pork chops, or chicken cutlets.

I’ve got a BJ’s membership and I’m seeing brands in there I’ve never seen before in any store. And that’s because BJ’s is buying its products from anyone who can deliver. And a lot of the bigger names just can’t deliver anything right now.

But that’s not the case for Alkaline Water Company. Thanks to its nationwide packing and distribution network, while other companies have had to dial back shipments, Alkaline has stepped up its production and take the place of bigger brands without the operational stability.

Alkaline is the biggest customer at most of its co-packing plants across the U.S. And that means it gets priority treatment. One of its biggest competitors and the big name in enhanced water is Essentia. It’s a private company, but the leading seller of alkaline water in the U.S.

It’s co-packers also make their own brands, however. And that means, even as one of the biggest, Essentia’s products are getting pushed to the bottom of the list.

But that’s not happening for Alkaline Water Company. Since it’s the main customer for most of its distribution partners, its getting priority in their plants.

And with Americans stocking up on essentials — like bottled water — that’s put Alkaline in a position to steal a lot of market share from its competitors.

And it’s helping the company sell more water in a month than it normally does in a quarter.

Alkaline runs on a fiscal year that ends in March. So, it just wrapped up its fourth quarter and is crunching the numbers for its quarterly earnings presentation. We’ll no doubt have to wait until late June to early July (when the company typically reports Q4 earnings) before we get the official numbers.

By my estimates, based on conversations I’ve had with some folks at the company, the massive rush of sales in March should put the company over $40 million in annual revenues for the 2019/2020 fiscal year. That would be a record and represent  25% growth over the previous year.

And that presents an interesting situation. The stock is trading with a market cap of around $36 million. It’s trading for less money than it made in sales last year. That’s a disconnect.

The average price to sales (P/S) ratio in that industry is around three. With Alkaline’s stock trading at a (P/S) of less than one, that gives ample room for upside reversion. If it were to move back up to an average valuation, we're talking about a potential 233% rally.

And we may not have to wait until earnings are officially out to see it start. With the blowout month I’m hearing about from company insiders, I think we might just get a press release before official earnings come out telling us just how good of a quarter it turned out to be.

And that could drive the stock up double digits on the same day.

Gotta Have a Comp

You may wonder where I’m getting that double-digit daily jump estimate. Well, wonder no longer, because I'm going to show you…

Earlier this week, New Age Beverages gave guidance on its upcoming quarterly earnings (to be released in early July also). And it showed a surge in sales thanks to COVID-19. People were ordering more of their products while being stuck at home.

New Age’s management said they see revenues for the quarter coming in between 9% and 13% higher than analysts’ estimates. And shares took off.

By noon that same day, New Age Beverages’ stock had rallied over 50% from the day before and closed the day over 40% higher: 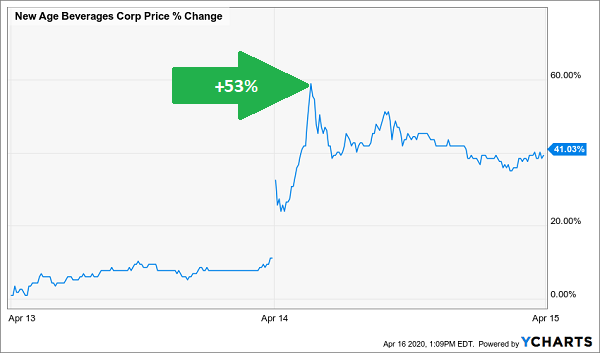 A sustained 40% jump because revenues might come in just 9% to 13% higher than expected.

Well, as of right now, analysts are looking for Alkaline Water Company to report $10.17 million in Q4 revenues come July’s report. But I’m hearing rumors the company hit close to $10 million in sales during the month of March alone.

If New Age’s share price exploded 50% on news its revenues would be 9% to 13% higher, imagine how much Alkaline Water Company’s stock can rally if it lets on that last quarter may come 50% (or more) higher than estimates.

It could literally double on the news alone.

I’m personally considering adding to my speculative position after seeing the move New Age Beverages made this week. And I’d recommend you do the same. But I’m also not letting the board and executives off the hook for the beating shares have taken since February.

And I’m going to be taking them to task in a very public forum — Reddit.

The head of Alkaline’s board will be hosting a Reddit “r/IAmA” next month and has agreed to publicly answer any questions I pose to him on the forum.

Now, I’ve already got a few of my own, but I wanted to give you the opportunity to get your questions answered as well. So, if you have any, I’m asking that you reply to this email and send them my way.

I’ve been promised that all of my questions will make it to the top of the list and get a personal answer.

So, if you’ve ever wanted to make a company’s director sweat, now’s your chance. Send me your hard-hitting questions and I’ll make sure they get answered for all to see.

I’m also working on an incredibly lucrative investment with my partner in crime, Brit Ryle. We lead an investment and wealth-building community called The Wealth Advisory. And we’re always on the lookout for ways our members can minimize risk and maximize profits.

We’re adamant about folks setting up extra income streams — especially in times of crisis like this. And we’ve found a way for folks to potentially pocket up to $43,000 in extra income this year.

We’re doing the last of our due diligence now, and we’re planning on releasing a special report next week detailing how you can get involved.

We’ve also recently zeroed in on what we feel is the absolute best way to invest in the continued growth of 5G wireless networking in the U.S. It’s a practically unknown company, but it’s got a stranglehold on the infrastructure needed to mount 5G antennas and connect them to data storage centers.

It’s charging a “toll” to any company that wants to use that infrastructure for its 5G network, and it’s sharing those tolls with investors.

It’s already got deals with all the major wireless carriers, not to mention the federal government and many government agencies and NGOs.

It’s trading for less than eight dollars, but shares are poised to double in the coming months. This stock could trade for $16 by the summer. And you could sit on a triple-digit gain while the rest of the market is still trying to figure out which way is up.

But you’ve got to act fast. With every passing day, the company gets closer to discovery by the public. And when that happens, the gains are going to be big and fast. If you want to capture them, you must be invested before the crowd.

So, click here to access our presentation on this company and learn how you can start banking monster gains from the 5G “tollbooth.”

Or get access to a written report with all the same information by clicking here.

However, you digest the info, make sure you do it today. Next week could be the start of a massive rally. And you don’t want to miss out on these 5G gains.