Is it Time to Buy Tesla (NASDAQ: TSLA)?

Buying Tesla on the Cheap

Regardless of what you may think of electric cars, you've got to admit, Elon Musk – founder and figurehead of the world's most famous all-electric automotive brand, Tesla Motors Inc (NASDAQ: TSLA) – knows what he's doing when it comes to marketing.

He launched his company a decade ago, and a full five years passed before the first production of the Tesla Roadster for the American market.

Since those early days, Tesla's sold fewer than 3,000 of these iconic little cars in 31 countries around the world. 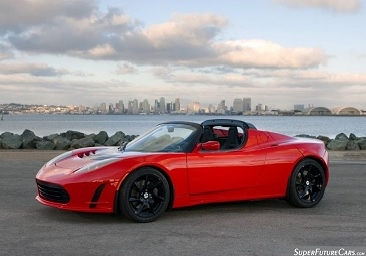 And yet this impractical 2-seater is an example of success in a niche where few – including, perhaps most famously, the failed GM EV1 – came anywhere near capturing the hearts and minds of consumers and automotive enthusiasts.

Why did it work?

I think the answer is fairly simple, as all answers to global questions tend to be.

Instead of ignoring the gearheads and hot-rodders – you know, those guys who tend to look at fuel efficiency as a weakness and global warming as an afterthought – he instead chose to ignore the typical electric/hybrid buyers by building a sports car.

A Green Machine for Car Enthusiasts

The Roadster, despite its electric motors, is the genuine article when it comes to performance.

Boasting a 0-60 time of less than 4 seconds and a quarter mile run of just under 13, it ranks right up there with some of the world's best known and most sought-after sports cars.

And it accomplishes this while going up to 300 miles per charge, delivering a reported 120 mile per gallon-equivalent.

Yes, its high-torque 250 horsepower electric motors do have a downfall. Lacking a proper sports transmission (generally unnecessary given the inherent torque advantages), the car will 'only' do 125 mph flat out.

Not exactly a Porsche or a Ferrari, but good enough for true car enthusiasts to take notice and – perhaps for the first time ever in response to an electric car – for some much-needed recognition.

Even world famous car-aficionado Jay Leno gave the Roadster some praise, stating that all it lacked was the noise but adding, jokingly, that that can be supplied by an MP3 file.

Instead of throwing the tree-hugging community an all-electric vegan bone in the form of a shapeless blob with no pickup, he went straight to the most discriminating car market and dared it to find fault with his hot rod.

Of course, the flagship isn't a flagship without support vessels protecting the fleet's flanks... And that was exactly the idea behind Tesla's next model, the S. 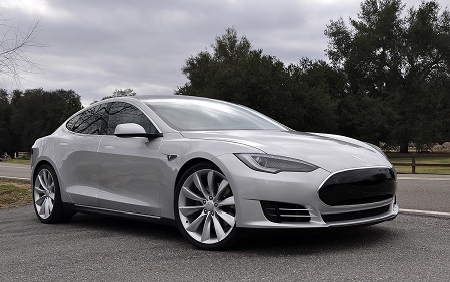 With a starting price of around $90,000 and a fully-loaded price of close to $130,000, the S was a direct competitor to popular all-gas or gas-electric hybrid offerings from BMW and Mercedes.

It was a move that made sense, given Tesla's rapid acceptance as a global car brand and, as of 2010, a publicly traded company.

After all, its all-petrol competition has been doing the same thing...

Porsche, which made its name on the iconic 911, also diversified into the family 5-seater market with the Cayenne SUV and the Panamera pseudo-sedan.

Even the traditionally snobbish, tree-hugger-shunning designers at Ferrari bit the bullet and offered a 4-seater with a hatchback (albeit a 650 horsepower one capable of 210 mph) when they released the FF in 2011.

In comparison to Tesla, however, the legendary design teams at Porsche and Ferrari are, to put it mildly, still somewhat resistant to change.

An SUV With Wings

Musk's newest model, the Tesla Model X, is definitive proof that engaging a variety of need-specific markets was more than just a brand-building gimmick. It was a business philosophy that continues to this day... 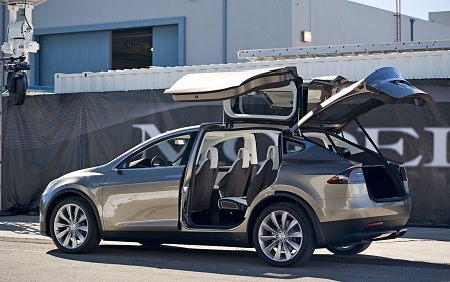 Moving about as far from the performance car market as one can go short of building a couch, the Model X is a gullwing SUV built on the Model S frame for maximized production efficiency.

Yes, you read that correctly. An SUV with gullwing doors reminiscent of the design made famous by the Mercedes SL300 in the 1950s, revisited by DeLorean in the 1980s, and carried into the present, again by Mercedes, with the SLS supercar.

Only the Tesla is a 4-door SUV, with its front doors opening traditionally and its rear doors lifting upwards just as the term 'gullwing' implies.

Design cues notwithstanding, the fact that Tesla is jumping into the SUV market with the Model X shows a clear understanding of the dynamics of the performance car market.

New and untested SUVs aren't the easiest things to sell to well-heeled buyers because there's a long list of competition out there from proven makers like BMW, Land Rover, Mercedes, Lexus, and Porsche.

However, given that all-powerful branding Tesla has been building since day one, an SUV – even one with gullwing doors – could be exactly what this fledgling car maker needs to maintain its developmental momentum...

Pricing for Tesla's third production model is still the stuff of rumors, but given that it borrows its skeleton from the S, I would imagine the X would sell for just north of its predecessor's cost spectrum.

Tesla expects to begin limited sales of the SUV at the end of 2014, with volume production commencing the following year.

On the investment side, this means we could see another milestone for Tesla stock, which has been wavering a bit after hitting a high of $194 earlier this year.

In a world where green means boring and automobiles in general are getting smaller, more efficient, more homogenized, and less stylish, Tesla seems to be dodging all of the pitfalls of trend compliance.

It started out by raising an eyebrow, and it continues doing so every step of the way...

Trading at a 29% markdown from just 2 months ago, Tesla might be one of the best bets out there today.