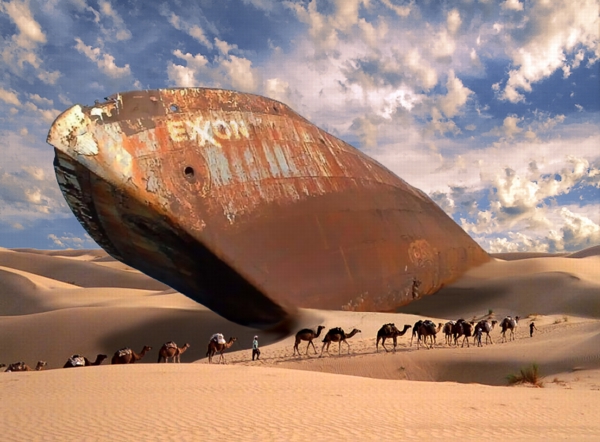 The SEC just told Exxon (NYSE: XOM) to suck it.

But after Exxon tried to block shareholders from voting on a proposal to publish an annual assessment of the long-term portfolio impacts of climate change policies, the SEC denied the crocodile tears of Exxon lawyers who claimed the proposal was too vague and that the company had already provided its investors plenty of information regarding climate change risks.

Here's what the SEC sent to Exxon …

We are unable to conclude that the proposal is so inherently vague or indefinite that neither the shareholders voting on the proposal, nor the company in implementing the proposal, would be able to determine with any reasonable certainty exactly what actions or measures the proposal requires.

What's particularly confusing about all of this though, is that there are Exxon investors that are so naïve to believe that climate change and climate change-related policies won't have any significant impact on the company's long-term health.

Certainly the folks that run Exxon aren't stupid. Of course they know that climate change and climate change-related policies are going to impact the business. Everyone knows this. But you know the routine: deny, deny, deny.

Now understand, I don't write these words to criticize the company. I get that this is an oil company and it's doing whatever it can to keep those dollars rolling in. That's what its shareholders expect. So of course no one was surprised when the company tried to block this shareholder proposal, and of course it's no surprise that the company spent years trying to hide the effect climate change and climate change-related policies would have on the company.

Hell, Exxon spent decades and millions upon millions of dollars to deny climate change was even real. Yet here the company is today, not only fighting shareholders as some try to shine a light on a very large elephant in the room, but now fighting the New York attorney general which launched an investigation into the company for possibly misleading the public and investors about climate change.

Again, I'm not criticizing management for doing what it believed was in the best interests of shareholders. Albeit somewhat unethical, I'm not even sure it's illegal. That'll be up to the courts to decide.

But here's what I do know …

Every single person on this planet that wishes to preserve the health of this planet for future generations shouldn't have even a slight bit of exposure to the oil industry.

Sure, it's good to see some Exxon shareholders causing a ruckus, but none of this will stop Exxon or any other oil company from producing oil. The only thing that'll limit the ability of oil companies to sell oil is consumer behavior.

A Safe Place for your Money

Look, oil companies aren't evil. They're simply the result of the very basic fundamentals of supply and demand.

The truth is, if we didn't limit our personal transportation options to an outdated internal combustion engine, then the oil industry wouldn't be anywhere near as relevant as it is today.

Wars fought over oil, economies manipulated by oil pricing schemes, terrorist organizations relying on a steady demand of oil to keep them well-armed. What person in his right mind would ever want to invest in something so incredibly harmful to the environment, to the global economy, and to society?

Of course, the funny thing is, much of Exxon's denial and misinformation about climate change is actually hurting the company now, not helping it.

Look, as we move forward, you're definitely going to see more climate change policies enacted. And yes, this will have an effect on Exxon and every other fossil fuel company out there. How long that will take is anyone's guess. But I suspect that if you're looking to invest in oil companies, you'll probably do a lot better by trading those stocks instead of investing in them long-term.

I'm not saying that right now you can't make money in oil or with a stock like Exxon, but I am saying that in another ten years, climate change-related policies will be in full effect. And those companies that don't take these warnings seriously today will, in another ten years, be the companies trying to swim upstream against the backdrop of a rapidly warming planet and a rapid transition of our energy economy that's already moving us away from fossil fuels and towards cleaner, more sustainable energy alternatives.