Is Argentina Back After its Great Depression?

Or are we looking at another retreat?

Twelve years after it defaulted on its debts back in 2002, Argentina is finally being let out of international banking’s equivalent of the dog house. Creditors are once again willing to lend it money.

“In recent weeks,” read yesterday’s statement released by Argentina’s economy ministry, “various financial institutions have presented proposals of access to external financing with repayment timetables and interest rates similar to those offered to other countries in the region.”

Though the details are still closely guarded until the official announcement is made, media sources have said that Goldman Sachs is among a number of international investment banks tendering their offers.

Has Argentina really made that much progress since its 2002 default? Clearly international banks are seeing something attractive in what is now the third largest economy in Latin America, just behind Brazil and Mexico. Might this be a good time for us little guys to invest in Argentina’s recovery too?

Argentina has worked hard since 2002 to rebuild its economy and put its books in order. It has done a pretty remarkable job, too, growing its GDP nearly five-fold from a post-default low of $100 billion in 2003 to over $474 billion today – averaging an annual GDP growth rate of over 5 percent throughout, as indicated in the graphs below. 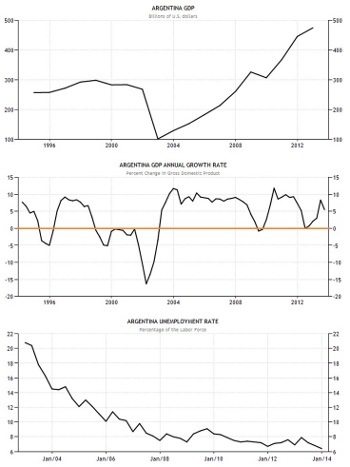 While negative GDP growth (shrinkage) in the opening years of the millennium caused GDP to plummet from $300 billion to $100 billion which contributed to Argentina’s 2002 default, the nation’s economy has since been on a tear, its unemployment rate falling from 21 percent to just 6.4 percent in Q3 of last year – better than even America’s.

Except for a slight drop in GDP at the height of the 2008-09 global financial crisis, Argentina has been humming along on all cylinders.

But recently something has been happening in global financial markets that threatens to destroy all the progress Argentina has made these many years.

Despite its robust GDP growth over the past ten years, Argentina’s peso has been hit pretty hard along will almost every other developing market currency since the U.S. Federal Reserve first announced in May of last year its plan to taper stimulus. 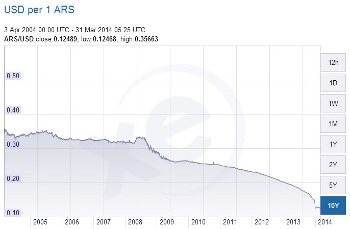 As noted above, the Argentine peso has lost 62 percent of its value since the 2008 global financial crisis, and 21 percent of its value over the past 3 months since the U.S. Fed began its tapering - which resulted in a flight of capital out of developing countries from India, to Russia, to Brazil and all points in between, on its way into more attractive U.S. bonds.

The flight of investment capital out of an economy deals the nation at least three major blows:

• It slows economic growth, since there is less foreign investment in industry,

• It leaves the government with less incoming funds to cover budget deficits, forcing it to borrow more money,

• It weakens the local currency, which triggers inflation, requiring the government to pay more to cover interest payments on its foreign debts, and raising the interest rates on new loans.

Clearly, then, the Argentine government wants to stave off the fall of its peso, as a weak currency creates the very conditions that lead to its 2002 default – a road the government does not want to go down again.

But is it too late? Might Argentina already be at the point of no return? Signs of a potential repeat disaster may have already begun to show.

Early Signs of Another Disaster?

One of the most critical factors leading up to Argentina’s 2002 debt default was falling revenues through exports and a growing account deficit.

This drop in income made an already negative current account even more negative from one decade to the next. 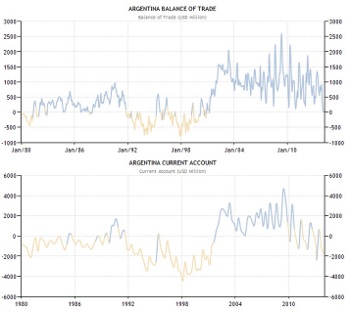 But things picked up dramatically shortly thereafter. From 2003 onward, Argentina’s exports vastly surpassed imports once again, helping lift its current account into positive territory for most of the last ten years.

How did Argentina pull its economy out of the fire? It borrowed dollars and printed pesos with fervor, as noted below. 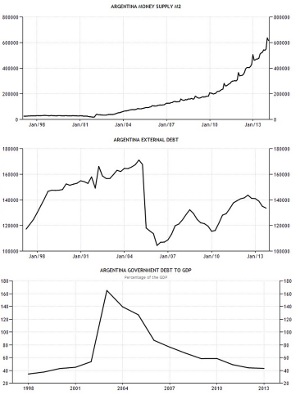 Argentina’s aggressive money printing has allowed it to finance a large part of its current account needs, along with raising more debt from 2003-04. After a large amount of debt was restructured in 2005-06, Argentina was able to continue borrowing. While most credit markets refused to lend to Argentina until just recently, its government was able to borrow from foreign governments, the World Bank and the International Monetary Fund.

Why was it allowed to continue borrowing? Because there was room for it in the progress it had made. As the nation’s output began to soar from 2004 onward, its debt amounted to a progressively smaller percentage of its steadily rising GDP – with its debt-to-GDP ratio falling from a record 165 percent in December 2002 to just 43 percent by 2012. This is better than the debt ratios of even the most prosperous nations, including Germany’s 81 percent of GDP, the U.K.’s 89, France’s 90, and America’s 101.

As such, international investment banks are lining up to do business with Argentina once again. It’s not just hot GDP growth and low debt ratio that make it attractive, but its high interest rates too.

While banks can’t even squeeze out a 3 percent return from U.S. Treasuries or 4 percent from mortgages, they are negotiating 6.5 percent interest with Argentina. It makes for a great carry trade opportunity, where investors borrow at low rates back home and lend at high rates abroad.

What is more, Argentina’s interest rates will remain high for some time. Its default in 2002 caused its peso to plummet and inflation to soar to as high as 41 percent, as noted below. Only rising interest rates could bring inflation back under control. 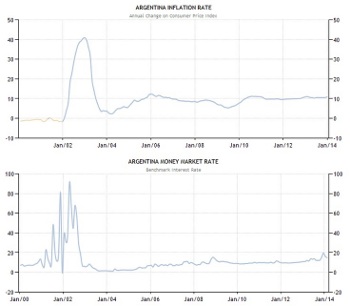 Even before the default, the government was in 2001 already hiking interest rates to entice foreign deposits to shore up its worsening account deficit and to raise funds to cover its interest payments.

When money printing began picking up steam in 2003, Argentina had to put interest rates on a steadily rising slope to as high as 20 percent late last year in order to counter the money printing’s inflationary effect, enabling it to keep inflation steady at around 10 percent.

The same can be expected today. Now that Argentina’s balance of trade is close to turning negative, and its current account sinks deep into the negative due to the flight of capital out of the emerging markets, the government must do what it did before – keep interest rates high and borrow more money.

Add it all together and investors could have a nice advantage in Argentina. Its GDP is growing faster than America’s and its debt burden is low. All it needs is some extra cash to see it through this latest phase of capital withdrawals taking place around the world – cash which is eagerly being offered by investment banks at the cheapest rate Argentina has seen in years.

Anyone thinking about investing in Argentina should focus on export-driven companies, since that will be the government’s focus for the next several years, as it attempts to swing its balance of trade back up again. The government will also be feeding its exporters with loans and stimulus to take advantage of the cheaper peso when selling abroad, and investors who own their stocks could benefit greatly.

Because interest rates are still high, exposure to large caps with substantial cash flows is preferred. We should also favor exporters over importers, as U.S. Federal Reserve tapering will continue to weaken the peso further, amplifying export income.

To make it easier, we could simply buy a basket of Argentina’s top 20 stocks – the Global X FTSE Argentina 20 ETF (NYSE: ARGT). Among the fund’s top holdings are:

• Arcos Dorados Holdings Inc. – (McDonald’s largest franchisee in the world, and the largest operator of McDonald's restaurants in Latin America)

While the ETF has rebounded off its $15 floor set last year, it trades in very light daily volume of around 2,000 shares. If you can handle the volatility, it could make a nice foreign diversification holding with strong future potential.