The Next Big Thing in Wireless

Over the next couple of years, we as a society will finally be liberated from one of the bigger annoyances to plague humans over the last several decades.

Not only do they constantly get lost or broken, but their necessity is exploited by the underhanded product development departments of just about every consumer technology manufacturer, which insist on changing ports and interfaces as often as possible so that for every new phone, the purchase of a whole new set of home and car chargers is also necessary.

The technology that will once and for all free us of this decidedly 20th century feature is called inductive — or, to the laymen, wireless — charging. 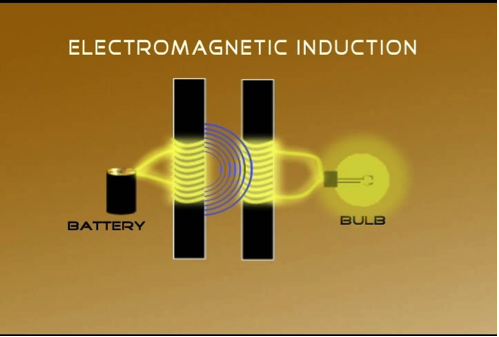 Using interlocking electromagnetic fields to generate a current within the handheld device itself, inductive chargers already available on the market today, such as the Energizer Duel Inductive Charger, allow for the charging of multiple devices at the same time. 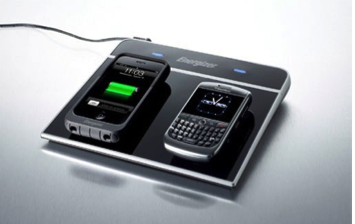 Now, this idea may seem fun and quirky to us, but to the industry, it's a big development...

Significant enough for an entire consortium to be established in order to set standards and practices for the implementation of this technology on a global scale.

Over 200 companies have joined the consortium since its founding, including tech industry giants such as Microsoft, Motorola, Nokia, Qualcomm, Samsung, and Sony.

The Qi logo, pictured below, indicates compliance with the standards. A device wearing this badge can be charged on a Qi charging pad with modifications or add-ons.

Qi hotspots have already been installed at the Tulsa International Airport and are expected to start making appearances in Coffee Bean and Tea Leaf cafes in the near future.

Whereas the first generation of Qi compliant charging pads needed to be in direct contact with the receiving device, recent upgrades to the Qi standards allow for charging pads that can project the charge through solid objects like tabletops.

However, not all companies have signed on to the Qi standard. For those who have not, Procter & Gamble (NYSE: PG) has come up with a work-around that allows any device, Qi compliant or not, to charge wirelessly.

The only requirement is a special carrying case, which will retrofit your iPhone, to convert the electromagnetic field produced by the charging pad into electricity. 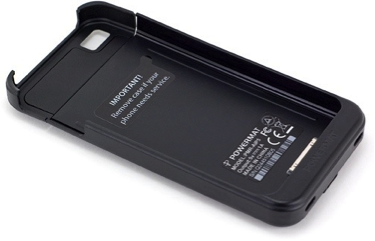 Duracell, a Procter & Gamble company, produces an entire line of Powermats, ranging from full size, AC-powered models to portable, wireless versions that can serve as an emergency spare on the go.

But there has been one conspicuous no-show to the wireless charging game — at least up until now...

In fact, the vacuum its non-compliance has created in the growing wireless charging market has made room for a number of smaller companies who build and market Qi cases for the iPhone.

One of the most interesting I've seen is the iQi wireless charging receiver (pictured below), which at 1 mm thick is not so much a case as an insert designed to fit between the phone body and any standard iPhone sleeve.

Costing just $35, this is a no-brainer for any diehard Apple enthusiast who yearns for Qi compatibility. 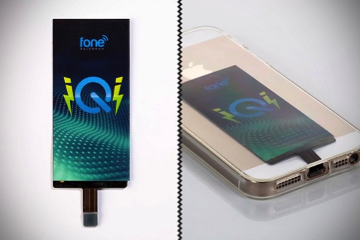 Now, while Apple might not be on the list of consortium members, it has its own plan for how to approach this problem.

Apple's take on wireless charging — which is rumored to be making a debut this year — will include 'smart' functions.

Based on a recently awarded patent, Apple wireless charging pads will be able to sense the orientation of a device (positioned vertically or horizontally) and, depending on that, either charge or sync.

The anticipated innovation is also expected to be a major function of the forthcoming iWatch, which would give Apple a decided lead over the Samsung Gear

Whether the iWatch — as well as next line of iPhones, iPods, and iPads — will also be Qi compatible still remains to be seen.

Based on the spread of Qi hotspots, it would behoove Apple to not limit its users to Apple-only charging stations, regardless of how smart they turn out to be.

Regardless of how Apple plays it (I'm predicting it'll use wireless charging to push new generations of each of its wireless lines), this is one trend in the consumer tech industry that isn't just easy to predict — it has already been decided in advance by what amounts to a committee of market-makers.

A chord-free world and an entire new universe of awesome tech toys for which millions of consumers will happily wait in line.

Market drivers this big definitely do not come around often.