Want to invest in something that is in high demand in multiple industries? With a lengthy future of usefulness still ahead of it? 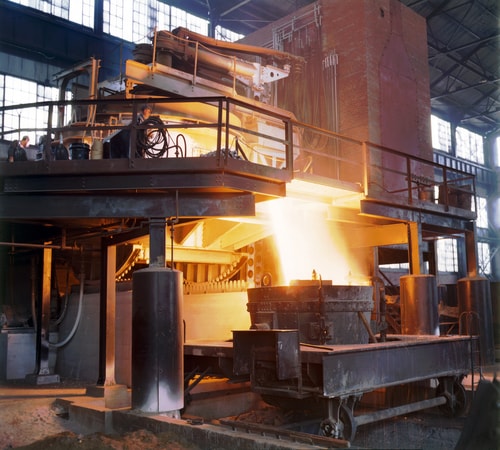 Then look no further than steel – one of the toughest and most enduring materials on Earth, both physically and economically.

The modern world revolves around steel. When America opened up its vast frontier with the expansion of the railroad, steel was there to open the way. When oceanliners ferried waves of migrants to the new world across the Atlantic and Pacific, steel was there to bridge the continents together.

Steel lifted man into the skies - in tall buildings that scraped them, durable aircraft that flew them, and miraculous spacecraft that penetrated them. At the same time, steel debased man back into an animal when he mobilized for war with massive battleships and armored tanks.

If you were to write a book about steel you’d be writing about the modern history of man – what made him, what drives him, and what destroys him.

Since humankind has so much invested in steel, we might consider investing in it a little ourselves. Analysts are certainly encouraging us to, with their recent upgrades to the most historically influential steel company of all – the United States Steel Corporation (NYSE: X).

The Refining of U.S. Steel

Just as the hottest fire can weaken and melt the toughest steel, the inferno of the recent Great Recession caused a meltdown at U.S. Steel.

As noted in the following graph of its stock price, from 2003 to 2008 U.S. Steel rose like the skyscrapers it helps build. On the back of explosive industrial expansion and rigorous construction the world over, X’s stock soared 1,800% from $10 to $190 in those five years, as global steel production reached a peak of 1.35 billion metric tons in annual production in 2007.

With the onset of the severest economic crisis since the Great Depression of the 1930’s, the modern-day Great Recession took X’s stock back down to Earth, plunging down to $20 in nine months by the spring of 2009. During these two years, global steel production fell almost 10% to 1.22 billion tons of production in 2009.

Though a 10% drop in steel production may not seem significant enough to cause such devastation to U.S. Steel’s stock, we must remember that a growing number of steel companies in low-cost developing nations had been cutting into U.S. Steel’s market share for years. The slowdown in construction in America and Europe where U.S. Steel does most of its business hit the company exceptionally hard.

As the recovery got underway, global steel production quickly surpassed 2007’s pre-crisis peak, reaching 1.413 billion tons in 2010. Global steel output has grown each year since then, reaching 1.607 billion tons in 2013. Yet U.S. Steel couldn’t capitalize on the boom times within its industry, as construction companies turned to lower priced steel produced in low-cost economies.

That extraordinary loss in 2013 was actually the result of a house-cleaning of sorts, as the company adopted a revitalization plan known as “The Carnegie Way”, named after one of the company’s co-founders, Andrew Carnegie, one of America’s most renowned industrialists. The 2013 loss included a $2 billion non-recurring charge as part of the company’s turnaround plan.

With a focus on cost reduction to better compete with low-cost steel producers in developing markets, The Carnegie Way program has already delivered $435 million in savings in fiscal year 2014, as noted in the slide below indicating the areas of its business from which the savings were derived. 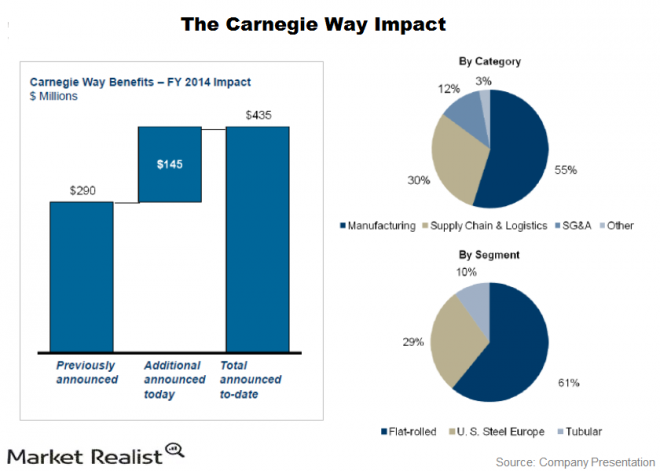 They say the toughest steel passes through the hottest fire. The massive 2013 write-down plus the substantial 2014 cost savings under The Carnegie Way have produced a more refined and stronger U.S. Steel Corporation, winning the approval of analysts who have greatly increased their future projections for the company’s stock.

As a result of improving operating performance, analysts have raised the company’s earnings per share dramatically over the past several days as follows:

Among those raising their estimates are investment bank Nomura Holdings of Japan ($40 target), Germany’s Deutsche Bank ($40), and American investment firm KeyBank ($48). The stock is currently trading in the $34 range.

Benefitting from the Oil Boom

Although U.S. Steel’s Q2 results showed some loss due to weather disruptions in the opening months of the year, with sales down 1% and shipments down 2% over Q1, and capacity utilization at just 75% in the U.S., its factories in Europe ran at almost full capacity reaching 98%.

U.S. operations were affected primarily by the unusually severe weather. “We’ve seen that the net profit fell by half in the second quarter,” explains Market Realist. “There were several factors that contributed to this decline, the prime one being the impact of adverse weather and the resulting disturbances in some production sites of U.S. Steel. Its facilities in the Great Lakes weren’t operational for almost half of the last quarter.”

Q2 saw net income from operations of just $30 million, as compared to Q1’s $85 million, on account of these weather-related disruptions. “U.S. Steel incurred a cost of $150 million to restore production at the affected sites,” Market Realist informs.

Yet analysts remain extremely confident that the company’s U.S. operations will see a dramatic boost through the continuing shale oil boom in the mid-west. The company’s tubular segment offers “seamless and electric resistance welded steel casing and tubing, and standard and line pipe and mechanical tubing products,” Yahoo! Finance describes the company’s tubular operation, which primarily supplies the oil and gas industry.

“With shale boom and rising oil production in the U.S., this segment has remained the most profitable for U.S. Steel Corporation,” Market Realist underscores.

To get a sense of how the oil industry is boosting U.S. Steel’s prospects, not only has the company shipped more tubing, but costs have fallen.

“The total shipments in the tubular segment increased 8% over the first quarter to reach 449 thousand tons,” informs Market Realist. “The cost per ton fell by almost $50 per ton. This led to the profit per ton nearly doubling to reach $105 per ton. The operating profit generated by the tubular segment was more than the combined profit generated by the flat rolled and European operations.”

Overall, U.S. Steel’s balance sheet has seen a dramatic improvement as of late, with cash rising and debt falling, as per the following graphs. 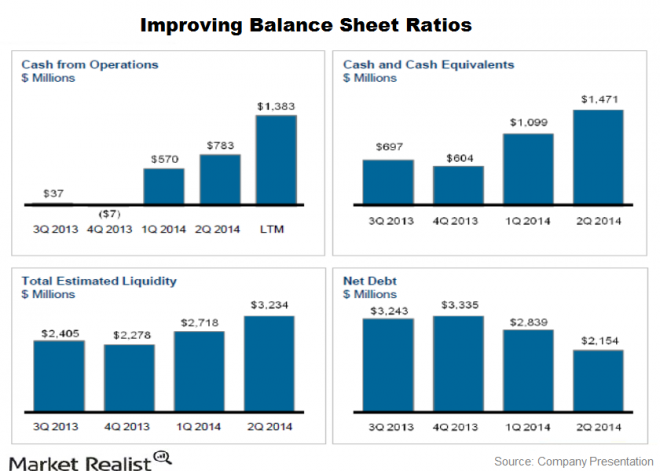 “The liquidity ratio of U.S. Steel has been improving over the past few quarters,” Market Realist summarizes.

“Improvement in liquidity ratios is a positive signal for investors in U.S. Steel.”
Even so, the company’s high level of debt is a concern, reaching $3.62 billion, or 71% of its $5.06 billion market cap. “U.S. Steel has one of the highest debt ratios compared to its peers,” Market Realist compares. “The high debt ratio increases the risk… It also increases the interest costs… and reduces profitability.”

Yet with the implementation of The Carnegie Way, U.S. Steel looks poised to mount a turnaround.

“As part of the Carnegie Way program, U.S. Steel has been focusing on reducing its debt levels. The debt ratios have been improving,” Market Realist concludes. “The cash flows from operations have been rising steadily… Due to the improving balance sheet, U.S. Steel Corp. has seen improvement in its credit profile. It’s a welcome sign for the company’s debt and equity investors.”

Since the implementation of The Carnegie Way, U.S. Steel’s stock has been climbing ever higher, rising over 100% over the past 12 months for a doubling in price. With still no end in sight to steel’s critical role in manufacturing, transportation and energy, U.S. Steel’s stock is expected to remain as strong and durable as the steel it produces.