Investing in Rare Earth Stocks: Our Top 3 Picks for 2020

In May of 2019, China threatened to cut off its supply of rare earth elements (REEs) to the U.S. as part of an ongoing U.S.-Sino trade war.

The news sent shockwaves through various markets because America depends on China for a staggering 80% of its rare earth imports. Rightfully, a lot of people began to ponder what 2020 would bring for the rare earth supply chain and related stocks.

After all, if America were cut off from China’s rare earth minerals, it would inevitably be forced to look elsewhere for its supply. Investors quickly flocked to a number of Australian and Canadian rare earth stocks, with the idea that these companies would benefit the most from U.S.-China tensions.

And for a brief period of time, they were right:

Western Australia’s Lynas Corp. (ASX: LYC), the only other major rare earth producer outside China, was up 16% in a matter of days. 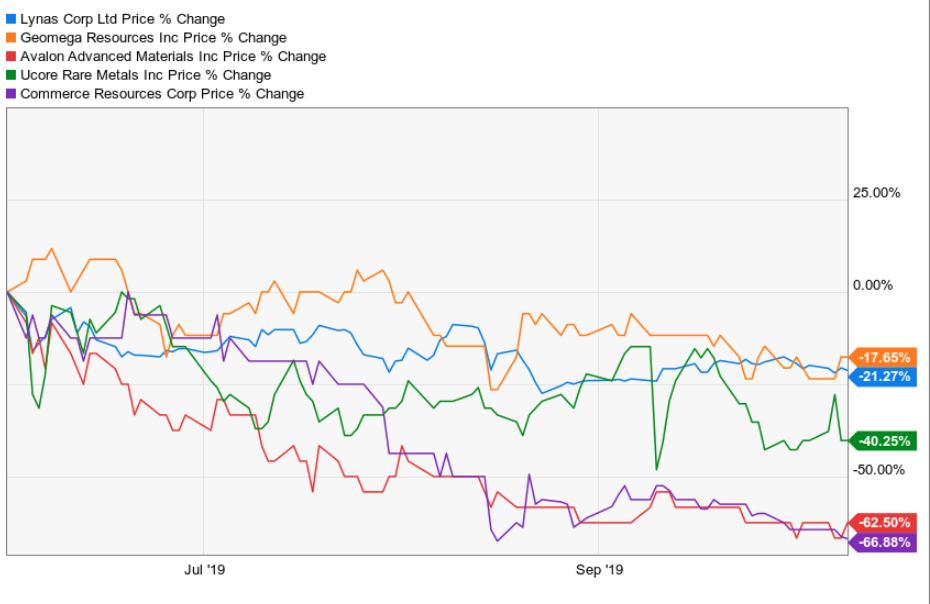 If you’re seriously thinking about investing in rare earth stocks, this market tale is one you should keep in mind before pulling the trigger. While enticing at face value and a potential oasis for swing traders, the rare earth market is actually a very dangerous place to be for the unacquainted.

There are a few reasons investors get burned trying to invest in rare earths, but the most critical factor likely has to do with the fact that many rare earths elements are deceptively categorized.

To put it simply, many REEs aren’t actually rare at all. The USGS (United States Geological Survey), for instance, describes rare earth elements as “moderately abundant.”

You see, when most people hear that China controls as much as 96% of global REE production, they assume the nation won some kind of geologic lottery. The truth, though, is that rare earth deposits can be found all around the world; China is just willing to dig them up at the lowest possible margins.

The reason for this is that rare earths are often very difficult to extract. Ultimately, it’s not about how much you have underneath your feet, but rather how efficiently you can extract and process them.

In short, if you plan on investing in rare earth stocks, you should beware of junior miners who have no history of profitable production but are promising what seems too good to be true. As alluring as massive deposits can be at face value, more often than not, companies will be burning more cash than it’s worth.

Instead, what you’ll really want to be looking for as a rare earth investor is who has the highest margins. These are the companies that will be able to outlast their competition and maintain a stranglehold on the market.

Below, we’ll talk about a few of our top picks for rare earth stocks under this general line of thinking, but a few caveats first.

Some of you hard-core REE fans won’t like this, but I’m just going to call it how it is: At a time when there are roughly 630,000 publicly traded stocks throughout the world, there are much better places to invest than rare earths.

Historically, this has been a disastrous market for speculators, so you should know you're getting into risky territory here. That said, there could be some light at the end of the tunnel, as technology continues to drive demand for rare earths. We don’t love this segment by any means, but it can’t get much worse than it’s been the last decade.

According to Zion Market Research, the global rare earth market will grow in value from $8.1 billion in 2018 to more than $14.4 billion by 2025. The margins aren’t going to suddenly knock it out of the park, but at least there will be growth on the top line.

With that all said, here are our top three picks for companies producing any of the REEs above:

Lynas Corp. is the only REE pure play outside of China that investors will want to pay serious attention to right now.

The Australian mining company explores and mines for rare earth minerals such as neodymium and praseodymium.

Being the only profitable pure play rare earth company outside of China that we know of, Lynas Corp. stands to benefit the most from any existing trade tensions between the U.S. and China.

China, however, is actually one of Lynas’ top customers for neodymium and praseodymium, so any slowdown in the nation’s economy will negatively impact the company’s top line. In fact, Lynas began to see a slowdown in demand in 2019 because of a weakened Chinese economy.

Still, Lynas remains the world’s second largest rare earths producer and the only integrated rare earths miner and processor outside of China. It has trusted relationships with key customers, making it one of few bellwethers in the REE segment.

Of all the rare earth stocks to own, Lynas Corp. makes the easiest case for the top pick.

Freeport-McMoRan is more of a play on copper than REEs, but we’re including it on our list because of the fact that pure play rare earth stocks are virtually nonexistent these days.

Located in Phoenix, Arizona, Freeport-McMoRan mines more copper than any other publicly traded company in the world. Still, it is one of the few companies outside of China with any exposure to rare earth elements.

In South America, the company has one mixed copper-molybdenum mine. Its Indonesian operation produces no REEs.

All told, Freeport-McMoRan is producing about 95 million pounds of molybdenum every year at an average price around $12 per pound. That works out to $1.14 billion in revenue on an annual basis, which is a mere fraction of the company’s $15.9 billion top line.

Clearly this isn’t a pure play, but it’s still one of the best options investors will have on REEs outside of China. The company last reported an annual net income of $2.6 billion.

Not for the faint of heart, Avalon Advanced Materials is a Toronto-based mining firm in the development stage.

While not yet a producer, the company does have three advanced-stage projects that have access to common elements like lithium, tin, and indium, but also a number of REEs, including tantalum, niobium, and zirconium.

In early January 2019, Avalon announced a partnership with Australian firm Cheetah Resources to participate in the development of the rare earth resources at the Nechalacho Project.

Avalon is valued at a market cap of roughly $35 million, making it a tiny player compared to our other two REE stock picks. The company is not yet generating any money and has effectively no cash on hand.

Is it a great stock to own? I wouldn’t say so, but when we’re talking about rare earth companies, the pickings are undeniably slim.

China's #1 Weapon Against the West: Rare Earth Elements
Every modern piece of technology, from your phone to GPS satellites, depends on this crucial family of metals. And China has a stranglehold that the trade war is finally bringing to light. But Wealth Daily editor Alex Koyfman has a solution...
Preparing for the Worst Has its Advantages
Rare earths are crucial to every electronic device we use every day. But China supplies the vast majority of these resources... and the trade war is threatening our supply. But it's not all doom and gloom...
U.S.-China Trade Truce: Why You Shouldn't Celebrate Just Yet
A recent development in the tech industry hints that a trade deal between the U.S. and China at this point remains anything but certain. Wealth Daily editor Jason Stutman discusses what investors should be aware of...
After the Trade Deal
The U.S./China trade deal is a done deal. I'm sure there are still things that need to get worked out. But the U.S. trade delegation isn't walking away from this table... So here's what to expect.
Buffett's Envy: 50% Annual Returns, Guaranteed
Warren Buffett once told investors at an annual shareholder meeting, "...it's a huge structural advantage not to have a lot of money. I think I could make you 50% a year on $1 million. No, I know I could. I guarantee that."