A penny saved used to be a penny earned. But it can now be up to a few dollars – in some cases even thousands. Before taking that jar of pennies to the bank, you might do better to sift through it for any rarities. Most pennies in perfect condition can be worth from 10 to 35 cents, with the “S” series of even recent years appraised at $4 and more. 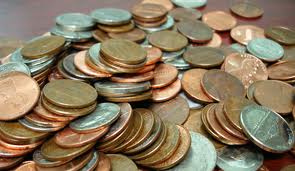 Several factors can drive up a coin’s value, including the price of the metal it contains, a limited stamping, an added numismatic value from a special design, or even errors.

Where a 1909 United States “Lincoln” penny to commemorate the 100th anniversary of President Lincoln’s birth is valuable enough at $26.50 in perfect condition, a 1909 V.D.B. penny bearing the initials of the penny’s sculptor and engraver Victor Brenner is appraised at $2,479 according to CoinTrackers.com.

You might also look for special years, such as one of a significant world event. A 1914 D penny at the start of the First World War, for instance, is valued at $4,268.

A special minting can also boost value, such as the use of steel in 1943 when copper was needed for the war effort, with the 1943 “steelie” penny worth some $25 today. Then there was the accidental release of actual copper pennies that same year, which are today worth $85,782.

Yet another error was made the following year with the release of steel pennies when the mint was in the process of switching back to copper, making the 1944 steel penny worth some $110,334 today. That represents an appreciation of over 11 million percent in 70 years, or over 157,000% per year. Now that’s a pretty penny!

What Isn’t Helping the Penny’s Value

There is one other economic consideration that will soon make pennies of any year something worth pinching. But it isn’t the price of copper, which at $3.17 per pound is close to reaching three-year lows. We aren’t anywhere near the 2011 copper craze, when prices over $4 a pound triggered a wave of thefts of anything made of copper – from wiring stolen from buildings and closed-circuit cameras to the sawing off of park statues.

It was hoped the four-day meeting would produce a definitive action plan to deal with China’s slowing economic activity and provide keenly sought details on hotly debated government reforms – including promises to rein in the power of state-owned enterprises and banks, a loosening of the one-child-per-family restriction, changes to the “Hukou” household registration system barring Chinese citizens from receiving public services outside of the jurisdiction in which they are registered, and land reforms including the appropriation of land and communal land-ownership.

Instead, the Chinese ruling party released a vaguely-worded general communiqué, “a gingerly worded document that would spell out the broad principles but leave out specifics,” as HSBC economist Frederic Neumann expected, cited by Market Watch.

When the government releases a more detailed report of the meeting’s resolutions next week, analysts expect to find lower growth estimates as the government tries to hem-in overheating markets. Matt Sherwood, head of market research at Australian financial services group Perpetual Limited, believes China’s growth will slow by next year.

”It appears that the country will push through with much needed economic reforms to be announced in March 2014, and one of these may be to cut the country’s growth target to a more sustainable +7% in 2014. This would be a major step and a sign that China is willing to accept lower growth in order to address risks emanating from rising debt and soaring property prices,” Sherwood predicted to Market Watch.

This lower growth outlook for the world’s largest consumer of copper is expected to keep the metal’s price under pressure. Eugen Weinberg, commodities strategist at Commerzbank in Frankfurt, surmised to Market Watch that next week’s “more comprehensive reform plan” should provide greater clarity on the Chinese government’s plans, “though it is questionable whether this will contribute to rising metal prices” as “most of the reforms are likely to target sustainability rather than rapid growth.”

Copper demand worldwide, then, could be subdued for the foreseeable future, as China joins other global economies struggling with diminishing growth. So you can spare yourself the electric shock of ripping copper wire out of your neighbor’s walls, as well as any fines from illegally melting down your pennies. Besides, pennies have very little copper in them these days, being made of 97.5% zinc with just a 2.5% outer copper coating since 1982.

When Less is More

But there is something else that can turn your jar of pennies into a small fortune. If rarity is a major driver of coin value, then soon any penny – no matter in what year it was stamped – will be something worth pinching, as they may soon be taken out of circulation.

Already, Canadian Mint has stopped stamping pennies, while supermarkets and most shops are no longer using them, rounding the bill up or down to the nearest nickel instead. The government finds them too costly to make and rather unnecessary in an increasingly cashless electronic marketplace.

Throughout America, there are growing grassroots movements among merchants raising their clamour to get the penny removed. It’s just too much hassle for them to count. Plus, it’s getting too expensive for the U.S. Mint to produce, as the cost of small change is no small change. “The Mint currently spends about 4.8 cents per penny… A nickel valued at five cents now costs approximately 16.2 cents to make,” GoldSilver.com quantified in 2012.

But if all those penny abolitionists get their way, you could be in for a treat counting your pennies one day soon… perhaps even counting them in dollars instead of cents.