REITs and How to Use Them

Following one of the most devastating shake-outs in real estate values in over 80 years since the Great Depression, real estate has rebounded into one of the hottest markets in which to invest.

Since the market bottomed in March of 2009, the Vanguard REIT ETF (NYSE: VNQ) holding an assortment of 138 residential, retail, office, storage and other REITs has soared an outstanding 275%, compared to the broader market S&P 500’s 224%.

In fact, compared to the nine sectors covered by the SPDR family of sector ETFs, VNQ has beaten eight. Over the five years since the economic recovery began, the only sector to beat the REIT sector has been consumer discretionary, as noted in the graph below comparing the VNQ (black) to SPDR’s sector funds since March 15, 2009. (We’ll talk about the red dot later.)

To get an idea of whether REITs will continue to outperform other sectors in the future, we need to look at what specifically made them perform so well so far. If the winds blowing in REITs sails continue, they should remain great investments.

So what are those winds that have given REITs such an advantage?

“Low interest rates are a positive for REITs,” answers Steve Sakwa of International Strategy & Investment Group. “That has really been a big tailwind for the group… because they really offer investors an attractive yield alternative relative to Treasuries or fixed income, and you have a growth characteristic to that dividend yield that will go up and increase versus kind of a fixed return over a period of time.”

Low interest rates have fuelled the remarkable investor interest in REITs over the years, as other income instruments like Treasuries and corporate bonds offer poor yields and little room for capital appreciation.

But doesn’t this spell danger for REITs going forward? Interest rates will at some point in the not too distant future begin their long march back up to normal levels of about 5 to 6%, most likely at a steady pace of about 25 basis points per quarter, or 1 full percentage point each year, until around 2020. We might expect interest rates to present strong headwinds for REITs.

Or maybe not. A look at the performance of REITs over the past year indicates they might not react to rising rates in the way we might expect.

An Interest Rate Negative for REITs

“I think we are going to see a pullback,” David Toti of capital markets investment bank Cantor Fitzgerald gave his prediction for REIT stocks in the near future. “I think in the near term there's some potential weakness, but our view at this level, real estate is fairly valued.”

What lies on the horizon that could bring about this weakness in the REIT sector? Let’s take a look at that red dot we mentioned earlier.

In the graph above, we note how the REIT sector (as represented here by the VNQ ETF of 138 REIT stocks) was hit hard beginning in May of 2013, and continued falling straight through to the end of December.

Remember what all the talk was about in May of 2013? The tapering of the U.S. Federal Reserve’s monthly bond-buying program, or Quantitative Easing III (QE3).

As the Fed spent the following 6 to 7 months getting the markets ready for stimulus reductions, investors went even further and started getting themselves ready for rising interest rates as well. The era of cheap low interest loans was about to come to an end, which would mean the end of the REIT boom. Or so it was believed.

In theory, rising interest rates would hurt REITs because commercial real estate companies that purchase apartment buildings, shopping malls and office space would now have to pay higher rates of interest on their loans for their properties, cutting into their profits.

Investors would therefore be likely to exit REIT stocks in favor of Treasuries and corporate bonds. True, rising interest rates would cause an initial sell-off in Treasuries and bonds as well. But once they stabilize, investors would be loured into bonds which would then offer yields comparable to REITs, but with less risk.

In practice, however, something quite different happened when the Fed actually started reducing its stimulus in January of 2014. As noted in the graph above, VNQ started rising again. It seems tapering talk was worse than its bite. There must be other factors at play in the real estate market that are somehow strong enough to overpower the negative pressures of less stimulus and a subsequent monetary tightening.

An Interest Rate Positive for REITs

While REITs will undoubtedly experience another mid-2013-like pullback at the beginning of the journey back to higher rates, the demand for commercial properties especially rental housing should be strong enough to offset any drag caused by rising interest rates.

“Market fundamentals are expected to remain strong over the next two years, according to a recent report from Freddie Mac,” reports CNBC. “Analysts there point to an estimated 3.9 million potential households that weren't formed due to the Great Recession, with young adults accounting for close to 75 percent of those pent-up households.”

High unemployment over the past few years prevented many singles and young families from renting places of their own, forcing them to share with roommates or live with family. But as the employment situation continues improving, the demand for multifamily residential units could grow by some 440,000 each year.

“Over the long run, we expect the demand for multifamily units to be stronger than pre-recession levels,” Steve Guggenmos, Freddie Mac senior director of multifamily investments and research projected. “As the economy improves, and most pent-up demand releases, demographic trends will be (disproportionately) favorable for the multifamily sector, due to the young adults comprising a large share of suppressed household formation.”

In other words, singles and young families who were once held back from forming their own households will be released into the residential rental market like a coiled spring unsprung. This demand will not only sustain residential REITs, but may even enable them to steadily raise rents, offsetting or even beating any higher operating costs brought by higher interest rates.

Another positive for REITs would, ironically enough, come as a direct result of rising interest rates, as they make mortgages more expensive to shoulder. As noted in the first graph below, rising mortgage rates during all that tapering talk of 2013 caused a dramatic slowdown in existing home sales (red). When mortgage rates stabilized in early 2014, home sales rose (green). 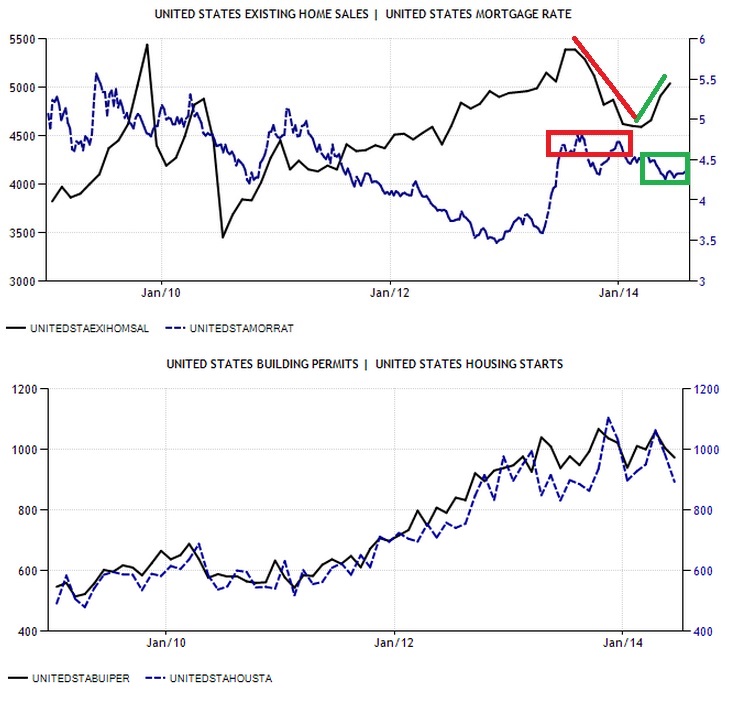 Yet while existing home sales rebounded, new building permits and housing starts continued their flatlining begun in 2013, as noted in the second graph above. New housing has stopped growing.

If new housing has plateaued with interest rates still at exceptionally low levels today, imagine the effect higher interest rates will have. Higher mortgage rates will slow the wave of home buying to a trickle, keeping the demand for rental units high.

• Rising interest rates will push mortgages and home buying out of the reach of more families, thus keeping them in their rental units a little longer (sustaining demand).

• Rising interest rates will come on the back of an improving economy and improving employment situation, meaning that more families and singles will be able to afford renting residences of their own (adding to demand).

Rather than kill the entire REIT play, if anything, rising interest rates will likely cause a separation of the various REIT sub-sectors from one another. For instance, while the residential REIT sub-sector should continue to enjoy high demand as noted above, the retail REIT sub-sector might experience slower growth or even stagnation – since higher interest rates result in a higher cost of capital, preventing many small businesses from expanding and opening new shops.

Thus, if a general all-purpose REIT ETF like VNQ (which owns residential, retail, storage, and office REITs in its portfolio) is too much coverage for your liking, you might decide to specialize within one or two REIT sub-sectors, with a leaning toward residential REITs as opposed to retail or others. Shops may shut down, but people will always need a place to live.